A Study on the Effects of Qigong for People with Dementia

A review by co-author Carole Milligan

A study report has been published in The Journal of Dementia Care (1) which examines the observed effects of Qigong and T’ai Chi movements for people with a diagnosis of dementia. This review includes some short extracts from the report with additional comments. 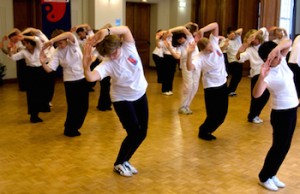 Since 2004 I have led regular weekly Qigong classes on behalf of the Forget Me Not Club in Aberdeenshire, Scotland. This is a charity for the support of people with dementia and their families and carers. At the outset, it seemed apparent that the T’ai Chi Form was not going to be suitable for this group. This was because of the necessity to remember the sequence and also because the disparate movements and changes of direction may not be ideal for a group of people at various stages of dementia. Qigong and individual T’ai Chi movements were chosen.

The group continued to grow and flourish and in 2009 it seemed desirable to conduct a study in order to ascertain how and why this group appeared to be so popular. One of my T’ai Chi Long Form students, Iona Parkinson, holds the position of Clinical Lead Occupational Therapist at the NHS Royal Cornhill Hospital, Aberdeen. Permission was given to conduct a joint study with the Occupational Therapy Department at Cornhill and Alzheimer Scotland kindly agreed to support the study group.

The people in the study group had no previous experience of Qigong. The method of observation used (by independent observers) was the MOHOST tool, a gold standard OT assessment tool. (2)

People with dementia appear to be ‘in the moment’ (Wuji), a sought-after prerequisite of Internal Arts which many ‘regular’ students find hard to achieve. My own approach has been that through the bilateral and centred movements of Qigong and T’ai Chi the ‘top down’ integration of Mindfulness (3) might be used to good effect in reverse. Both lobes of the brain may be stimulated equally by the alternate left and right movements, which can include the lower limbs and a weight shift as well as the arms. Repeated movements may help to renew or reinforce the neurological connections between mind and body.

“A review of literature was undertaken, it was clear that there is a lack of clinical trials in T’ai Chi / Qigong for people with dementia….. However, there is also a growing recognition of the need for a variety of therapies to support people to maximise their quality of life following a diagnosis of dementia.” (4)

My experience of the past few years of holding classes for people with all stages of dementia indicates that Qigong exercises are able to produce consistently beneficial effects.

“It was found that it was possible for the participants to learn, or in some cases relearn, new movement skills, for example how to make a fist when the ability to do this had been completely lost. New abilities were retained during subsequent weeks without prompting.”

Comments on Qigong for Dementia:

My husband thinks I’m better after the group – I can do things without hesitating.
After a session my daughter sees a difference – I’m more relaxed and things work better – I’m more alert.
I realise now (week 3) that you have to think about it and concentrate.  You have to use your mind.  When you concentrate it takes your mind off everything else.  I thought it was easy initially, but I realise it is more complicated.
Qigong has stopped the buzzing in my head.
I feel really chuffed that I could do it.  I was struggling at my local yoga class but I managed this fine.  I really enjoyed it – I don’t know what it is but I definitely feel better.
There is good cohesion in the group!
It was for the physical side that I came initially. I didn’t realise how much it would help me mentally. I feel normal – I forget that I’ve got dementia.
Energy entrainment can play a significant part in the group’s practice, encouraging everyone to participate in a subliminal way. The person who sits inactively and watches the others at the outset often can feel drawn to join in and eventually cannot resist engaging with the group.

“A recent study at the Institute for Brain Aging and Dementia, University of California, suggests that exercise may promote brain plasticity and stimulate neurogenesis. Their conclusion reads: Exercise is a simple…..behaviour that activates molecular and cellular cascades that support and maintain brain plasticity…..Significantly, these effects occur in the hippocampus, a brain region central to learning and memory…..” (6)

We have observed that Qigong can provide an effective group exercise for people with dementia which can be practised either standing or seated. It is an integrated mind-body practice which can be suitable for all levels of dementia when presented by an instructor who is sensitive to the particular abilities of each individual.

“The findings of the Cornhill study indicate that this programme of movements can help to maintain and retrain bi-lateral co-ordination, proprioception, concentration, spatial awareness and skilled movement. It was also noted that a sense of self awareness, confidence, relaxation and social skills were enhanced.”

The principle of central equilibrium (Zhong Ding) is employed to aid balance and to teach folk not to reach too far out of their base, thus helping also to prevent falls. Intent (Yi) can be significant in the practice of the moves as each posture and weight change requires concentration and focus. The use of mental focus enhances kinaesthetic sense, the ability to sense muscular movement and position. Specific Internal Arts training sets concentrate on the three planes of movement, which may link into the vestibular system. Qigong also develops spatial awareness and proprioception, the internal sense of awareness of parts of the body and their relative position in space.

Observed improvements from Qigong come not only from the physical exercises but also because people who have a diagnosis of dementia can discover an enhanced sense of personal freedom. With this realisation and growing confidence often comes a sense of fun! Conversation and memories start to flow and it becomes abundantly clear that our essential Spirit (Shen) remains with us always.

Awareness of the breath, opening and closing the joints, moving in alignment with the energy channels all promote concentration, balance and mindfulness. These are skills that we as practitioners aspire to incorporate in every move. But do we engage fully? There is something to be gained from practising Qigong with people who have dementia. One is truly in the moment!

Carole Milligan is based in Banchory, Aberdeenshire where she runs classes.