Cheng Man Ching on the dao of Taijiquan – a poem

Cheng Man Ching is portrayed by his students as an example of total dedication and commitment to the Chinese Arts, especially concerning Taijiquan. 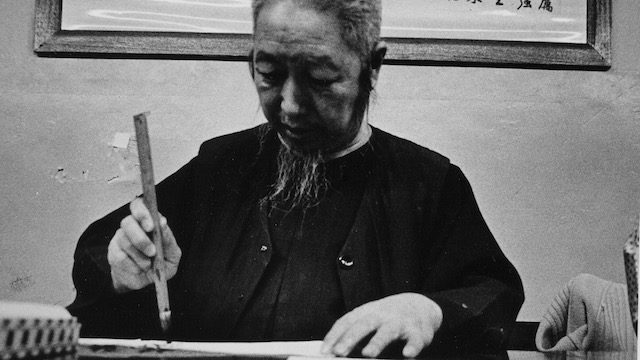 Following the dao of Taijiquan requires perseverance and serious study in its own right. Cheng Man Ching himself observed that disregarding functional applicability while learning Taijiquan creates at best artificial health benefits. One is tempted to add that to expect the maturity of character to develop just by religiously training body and mind in form and partner exercises might prove to be an equally artificial attitude.

But what is the way of Taijiquan self-cultivation? As it was done before in historical examples like the Daodejing or the Taiji Classics, Cheng Man Ching made use of a poem to express what the dao of Taijiquan meant to him:

TAI CHI CHUAN HAS NO OPINION. IT HAS NO INTENTION. IT IS AN IDEA WITHOUT MOTIVE.

IT IS AN ACT WITHOUT DESIRE. IT IS, PROPERLY, THE NATURAL RESPONSE TO AN OUTSIDE FORCE, NOT BEING PERCEIVED AS SUCH.

FOR IN NATURE, ALL ARE THE SAME, EVERYTHING IS ONE. THAT WHICH ATTACKS IS THE SAME AS THAT WHICH RESPONDS, THE SAME FORCE – REDIRECTED AND RECYCLED.

WHEN YOU INITIATE AN ILL-INTENTIONED MOVE, IT COMES BACK ON YOU.

THE PRINCIPLES OF TAI CHI ARE THE SAME PRINCIPLES BEHIND THE INNER MECHANISM OF THE GREAT ENGINE OF THE UNIVERSE.