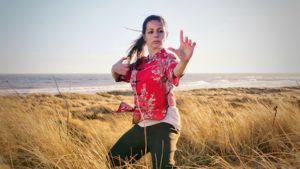 I have been a practitioner and teacher of Qigong (Yangsheng) for many years. In the scheme of things I am reasonably well qualified and have a great deal of experience. For the past few years I have been teaching Qigong professionally to cancer patients at a Maggie’s Cancer Care Centre. I can tell you categorically that I do not teach Qigong to cancer patients in order to cure their cancer. Claims of curing cancer with Qigong are not only bold but dangerous and irresponsible. They prey on the vulnerable and desperate. Even the more well known ‘cancer curing’ Qigong methods like the Gui Lin Walking Qigong has no real scientific basis for claim.

Why teach Qigong to cancer patients?

So why would I teach Qigong to cancer patients at all? Because I believe that Qigong has a multitude of benefits that can have a huge positive effect on people’s lives. It can, and it does! There are however a number of factors to take into serious consideration.

There is no such thing as a ‘quick fix’. Anything worth doing properly takes time and one of the biggest factors in practicing Qigong is the time it takes to absorb and understand what Qigong actually is;

Qigong is not just moving the arms and legs around in a ‘soft and floaty’ manner. In fact, it takes a great deal of time to retrain the body out of bad habits. It takes practice to release tension and regain strength and flexibility in the right areas thereby supporting the structure and internal workings.

And this is only the beginning…

Even with these things ‘mastered’ there is no real evidence to suggest that practicing Qigong alone, without the intervention of other medicines is going to cure cancer. Nevertheless, I do believe the benefits gained from practicing Qigong can be so enriching that it can form a vital part of your lifestyle. Benefits include:

Over the years practitioners from all walks of life have stated experiencing a whole range of secondary results:

With a good and responsible teacher who is able to recognise the limitations of the student and guide them accordingly, these benefits are seen fairly quickly. Over the long term Qigong practice becomes a way of life, a way of finding balance and harmony between body and mind. This is when the effects can really be noted by the practitioner and an overall improvement in health and wellbeing can be experienced.

Qigong Influence on own Cancer I was initially diagnosed with prostate cancer with metastasis in the spine 4 years ago in early 2014. At this point, I was completely unaware of the existence of qigong. The following year was spent in and out of hospital. Progress of the cancer was duly halted thanks to medication and numerous radiotherapy sessions. However, some damage to the spine cannot be reversed by medical treatment. I truly believe that qigong has saved my life so far…

GAINING POST CHEMO STRENGTH THROUGH QI GONG On June 30th 2012 I was diagnosed with a squamous cell carcinoma on the oesophagus – considered at the time to be terminal. Now in my third year as a student in this class I can report that I could not have made a better decision…

Personal experience with Qigong and cancer My name is Simone and I was diagnosed with CUP-syndrome in 2012 and with breast cancer with a genetic mutation in 2015. In convalescent care, a made my first contact with Qigong and I realised that it is very good for me…

Qigong and healing part 5 – The landscape of Qigong research The strictly practice-related approach of this kind of Wellness-Qigong research eclipses the theoretical problems; the contradictions mentioned above seem to be solved. – Regrettably, the opposite is true: The evidence produced in such a “practice-led” research cover the scientific dilemma, but do not contribute to its solution. Actually, with this research approach it does not matter at all, if one researches about Qigong or other methods (Yoga, Pilates, Zumba,…). The decision about the focus of the studies is neither related to a certain cognitive interest attached to the health method in question nor to the experimental design as such, but it is solely a question of taste or fashion…

Overview Qigong Studies As pointed out above, until now there is NOT any conclusive evidence whatsoever, that Qigong – irrespective of the sets and methods trained – has any tendency to heal certain diseases or illnesses. It is also NOT scientifically proven that any health effects of Qigong are in some kind deeper, more powerful or in some other way more effective than any other movement related activity as e.g. conventional health gymnastics or other Western or Eastern sports – modern or traditional…