The bow stance is the basic positioning the feet in the 8 form.

The easy way into the bow stance 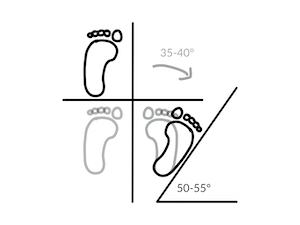 The feet are parallel and about hip width apart form each other, so that hips, knees and foot joints are in a straight line, seen form above. Now we turn the right foot outwards at about 35-40 degrees, so that it points slightly to the right side. Our line of orientation is the outer line of the foot (where the little toe is). Now we take a step forward with the left foot. We place the heel a bit in front of the line where our toes have been before. Now we move our weight to the left foot.

It is generally possible to make the bow stance bigger and wider. However, this means one has to stand much lower. Furthermore, the upper body would have to be tilted forward significantly to effect the desired weight distribution. A higher stance and a weight distribution of 80/20 favours the flexibility and the agility of the movements. Additionally, it protects the knees and makes the differentiation of the full (weighted) and empty (unweighted) leg much easier.

The first two videos will cover the basic posture and the position of the feet (bow stance), followed by videos for the single movements. For those interested in the intention behind the movements (or the martial application training), we will add the relevant episodes of our #martialmonday project.