This little film clip, featuring Sam Masich, shows how the hands should be held in tai chi practice. Often, particularly at the beginning stages, students, because they are concentrating on what to do, tend to hold their hands in a tight or tense manner.
Bearing in mind that the hands and arms are essential tools for ‘listening’ in tai chi it is important that they are held lightly in an ‘open’ free-flowing manner.

Sam Masich has trained and taught for nearly three decades. He has studied with some of the great masters of this era from including Liang Shouyu, Dr. Yang Jwing Ming, Jou Tsung Hwa, Yang Zhenduo and Chen Xiaowang.

His work as a full time instructor has taken him to over 100 cities in Canada, USA, Mexico, England, Scotland, Germany and Spain. 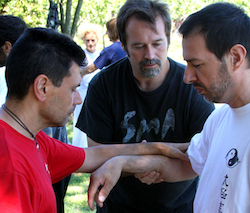 He is the creator of the 5 Section Taijiquan Program, a recreational and preliminary training program which includes bare-hand and weapons solo and sparring routines, as well as partner practices. Sam has distinguished himself in competition as a quadruple and septuple gold medalist in national competitions and was a member of the Canadian National Chinese Martial Arts Team competing in China at The World Wushu Invitationals in 1985. Since 1989 he has chief-refereed and judged in regional to national level tournaments in Canada and the USA.