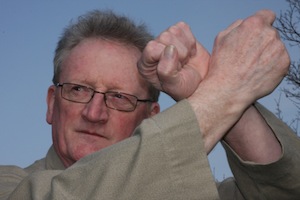 It is quite a difficult task to convey in words or images feelings and subtle movement. This must by its nature, be a very personal account of how one feels when moving through the various postures of a tai chi form. My teacher said to me” Tai Chi Chuan is not a technical exercise”. “You must feel your form and be aware of each of the movements as you pass through them”. Over the years this has meant a great deal to me.

A prerequisite to really feeling the form is that you relax and drop all extraneous thoughts and tensions. Let them fall on the floor. In time your form will change, as will your perceptions and feelings of the form. This the natural way of Tai Chi Chuan.

The system that I teach has both square and circular hand forms. The square form (where you are taught the movements step-by-step, to gain clarity in the individual postures) is used to build a foundation in Tai Chi Chuan. Teaching the structure of the postures, alignment, the styles of the system, some stamina due to the way the postures are held slightly longer and of course the form sequence. The square form is quite specific in its execution.

The circular form is somewhat less specific. It is fluid and very smooth and continuous, and requires greater co-ordination. As everything in this form moves as a unit, it is very much about feeling your way through it. A beginner will feel very different compared to someone who is a little farther down the road. However, as you make progress you will become acutely aware of how you move.

Continued refinement in Tai Chi Chuan is something that is an ongoing process. I think that too much emphasis on the technical isn’t a good idea. I feel that it can inhibit the naturalness, that is an essential part of Tai Chi Chuan. I believe that it is only through experience and practice that the real understanding of the technical and internal aspects can be gained.

Of course, the form should look right. If it doesn’t look right then it probably isn’t. If you were to take a photograph at any time during the form it should look balanced, comfortable and settled, with the body having a connected appearance. The external and internal should naturally combine. This does not only mean movement naturally combining with the breath, but also the inner feeling and structure of the postures, those aspects are what gives the form a sense of unity.

Everyone that practices goes through various stages of experiencing different levels of awareness. The constant practice under a good teacher is very important to bring a student through these levels. The form will change over the years, but the changes should come from a developing art and not from misunderstandings or mistakes that are all too easy to incorporate into a system. This is where the teacher must be constantly aware. There will always be differences due to various physical types, we are all different. However, this argument I feel, can only go so far. If the form is radically different or is wilfully changed, then there must be a question as to why this is. 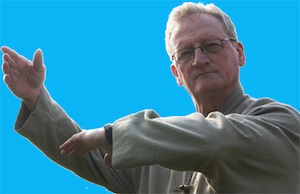 Although we all develop in our different ways great care has to be taken to stay true to the essence of the art. We must always be aware where the movement comes from. This awareness will also change with experience. Relaxation, smooth movement, alignment, correct hand and foot positions and feeling the body as a unit are what is encouraged from the beginning. Although at this early stage the form is generally hand led. Later as the student progresses, the more essential aspects of the art should start to become more apparent. That is, the refinements of co-ordination, the path from the ground, up through the legs, directed by the waist, up the back, over the shoulders and expressed in the hands. Note that the hands are the last to be mentioned. That is because the hands express what has already happened in the body. Like the end of a whip. Likewise with kicks the full force of a kick has the whole co-ordinated body behind it. You must use the spine/waist axis. The waist has more variety than just turning left and right. The whole of the Tantien area should be very active and spherical in its use. This adds greater mobility and strength while uniting the body.

Letting go is an important aspect of practice. Letting go so that the mind and body are calm, with the mind reflective and continuous. Going through the form as naturally as is possible allowing the muscles to relax and do their function naturally will also enhance “feeling” your way through the form. The lighter the form the more sensitive the body will become. The head is kept in a central position with the chin slightly tucked so that there is not tension in the neck. This will encourage the suspended headtop posture. To encourage this further it is also useful to go “through” the postures. This means sinking and lowering your centre of gravity and allowing everything to relax downwards. The stronger the root the more natural the” head suspended by a thread” will feel.

As much as you listen to your partner during pushing hands you must listen to yourself while doing the form. There is A and B in each posture. It isn’t enough to get from A to B, there is a way to get from one to the other. Likewise A can be the beginning of the form and B the end and it is important to have the correct continuity throughout.

Hopefully we should eventually go beyond the external performance and become less self-conscious so that all we are doing is Tai Chi Chuan, simply that. I hesitate to use the word spiritual, but Tai Chi Chuan has that dimension. It is purely training through a martial art, as much as a Zen Buddhist trains through meditation. It is the same mind.

As you will have gathered this article is not about the technical points of Tai Chi Chuan. It is essentially about ways of helping to get in touch with the body’s feeling as it passes through the various transitions of the form. Tai Chi Chuan should be done with our hearts and souls until we feel it into our bones.

Ian Cameron has been training in Tai Chi Chuan since the 1970s and is based in Edinburgh, Scotland where he runs his school of Five Winds Tai Chi Scotland