Part 2 of a 3 part article by Wang Hai Jun, translated by Nick Gudge 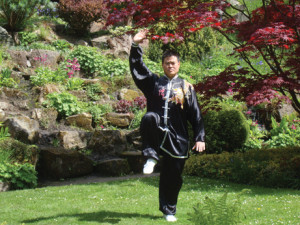 It is worth repeating that these are difficult ideas to formulate in words. They are difficult to gain an understanding of. It is difficult to grasp the skill of them. They must be shown. The student must be led to them. They are not skills that lead themselves to be grasped intuitively. This is why most people do not get a good basic grounding in them. Many teachers do not have these skill, so naturally it is not possible for their students to gain them. Even today, after more than 20 years of high level taijiquan practitioners being available as visiting teachers, still the level of these skills is not as high as it might be given the dedication, perseverance and effort of many players here in the UK.

Peng Jin (sometimes simply Peng) is the core skill of taijiquan. All other taijiquan skills are based around the skill. It comes from loosening the body (fang song) and stretching. In essence, ‘stretching but not straightening’ the joints. Peng is not a natural or instinctive skill. It comes from a long period of correct practice. Without a good understanding of peng and then considerable training to transform this understanding into this skill in every part of the body, it will not arise. Peng will not be gained by accident. It is systematically trained into the body over time.

When I was exploring writing this piece I considered making peng jin the first most important skill of taijiquan. However, while peng should be considered the most important skill, it is dependent on loosening the body (fang song.) It is an effective argument that Taijiquan is peng jin chuan because without peng there is no taijiquan. It is taijiquan’s essential skill. Peng is always used when moving, neutralizing, striking, coiling etc,. Through peng all other taijiquan skills are utilized.

The phrase peng jin has been the source of some confusion. The two characters (peng and jin) have several meanings in Chinese and specific meaning within the context of taijiquan. Jin is itself is not simple to translate into English. There is no one effective word that can be used. It is translated variously as skill, strength and energy and the term incorporates all of these meanings. Peng is even more difficult to translate. It has been frequently translated as “ward off energy”. I prefer the phrase ‘outward supportive strength’ as a translation. 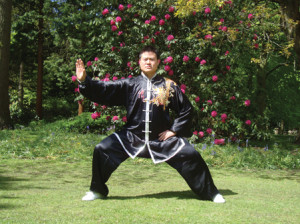 Chen Fake taught that there are two types of peng jin. The first is the fundamental skill or strength of taijiquan. The second is one of the eight commonly recognized taijiquan jins, (peng, lu, ji, an, cai, lieh, zhou & kao.) The first type of peng is the core element that is the foundation of these eight commonly recognized skills. It is perhaps best considered in English as a separate term from the peng that is listed as one of these eight skills. All eight jins have their basis in peng that is the fundamental skill. From the outside peng has different appearances so it is sometimes called the eight gates (after the eight directions,) but the heart of all eight is always peng the fundamental skill. It is this fundamental skill or strength that I am referring to when I talk about beginners skills. In the past ten years there has been much talk about peng. A student cannot simply demonstrate and use peng just because they will it. It requires external posture training combined with internal jin training to be able to correctly express it.  If you do not have peng then you do not have Taijiquan’s jin and it follows that you also will not havelu, ji or an etc”.

The fundamental skill peng describes when the limbs and body stretch or extend while maintaining looseness orfang song. Without looseness (fang song) the body is stiff and peng is lost. If the body is too loose or limp thenpeng is also lost. Without stretching the body is not properly connected and peng is lost. If the limbs and body are over extended then they become rigid and peng is lost. So it is fairly easy to see that a “balance” must be maintained to retain peng. If any part of the body does not have peng, it is an error and must be remedied appropriately. Many form corrections are about regaining peng to various parts of the body, most commonly the knees and elbows. Typically peng is lost or lessened because the body has stiffened or not been loosened sufficiently, most commonly the hips and shoulders.

Peng jin is not an “on / off” skill. While it is easy not to have it, once it is understood its quality can be improved. Like any form of understanding e.g. learning a new language, it is quite possible not to understand anything in the beginning. While learning there are many degrees of improvement or quality that can be sought and reached. From this understanding it is quite easy to see not only the importance of looseness (fang song) as an integral pre-requisite for peng – this fundamental skill of taijiquan – but also, that improving the appropriate looseness of the body will improve the quality or degree of peng skill.

It is very difficult to convey the idea of peng jin without hands on correction. The student needs to be lead to it after an initial degree of looseness is gained. It is not a “Step One leading to Step Two” type process. Rather it is a process of immersion which leads to understanding. Hands on, frequent correction of the body is required. Understanding the concept generally, will not necessarily translate to a compete understanding in the body. It is a process. Wandering off can and does happen frequently. As an old Chen village saying says, what is required is a good teacher, good understanding and good practice. Without all three gong fu will not be attained. It requires a teacher who understands and can see where the priority of correction is required to enable a student to understand the idea of peng in their body and not to become distracted or confused. 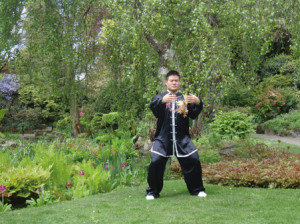 From inside the body, when peng is present any pressure is transferred to the ground (rooted.) The stretching process connects the body in such a way that this happens without additional effort. It could be called a flexible structure inside the body. Consequently when peng is present the body becomes a little like a solid rubber object. It is not rigid, but loose and flexible where pressure to any part is easily transferred across its whole structure.

When touching someone else peng can been described as an audible skill because, not only does it allow the detection of fine motions of an opponent (as if through the sense of hearing,) it also allows determination of their structural weaknesses. When touching a person with peng it become possible to know the best direction to attack them as well as being able to comprehend what the other person is doing and even intending to do. Listening skill (ting jin) occurs through peng jin.

In taijiquan the emphasis of peng is on leading and neutralizing of an incoming force. When peng jin is present there is the potential for rotation. With loose joints the body becomes mobile and by stretching it becomes connected. So any pressure on the body causes rotation or motion. Peng is at the heart of silk reeling as we will see in the last article of this series.

It is also the skill which allows and supports attack. It allows for a rapid response for rapid attack and a slow response for slow offensive. In push hands (tui shou) practice, the student is said to have crossed the threshold only when they have learned the meaning and skill of peng jin. Beginners often take years to accomplish this. While practicing, not only the hands and arms but where any part of the body that comes into contact with the other person a taiji player should make use of this outward supportive or warding force.

So, using peng, a skilled practitioner not only can detect what an opponent is doing, they can neutralize it, detect the direction of vulnerability and attack through it. When this understanding is reached it is easy to see why it is considered the core skill of taijiquan. Where the joints are not loose, peng is lost. Where the limbs are limp and not stretched peng is lost. So beginning with loosening the body, then adding stretching without becoming rigid, the skill that is peng jin becomes manifest in the body. Initially at the start and end of each posture, then continuously in the process of motion.

The meaning and understanding of ding is not difficult to grasp, thought the practice of it takes much more time.Ding means upright or straight and ding jin means upwards pressing skill, strength or power.

When beginning to learn taijiquan, loosening the body includes loosening the spine. If the body is not held upright then there will be excess muscular activity leading to stiffness. Most people do not know what it is to stand up straight. They have the habit of locking their knees, causing a tilt in the pelvis, which in turn causes their body to leans backwards. This creates significant stiffness around the spine and across the lower and mid-torso and hips.

When the body is upright (ding) then it becomes possible to loosen the spine and the waist and then the hips. Ifding is not present then it is most likely none of these can be achieved. When the student understands and maintains ding and consistently stretches without stiffening to produce peng in their body and movements, then the circulation of qi will become evident to them. As with all things in taijiquan, this is a process, with consistent and lengthy practice producing results.

More importantly this upward stretching without stiffening has the effect of lifting excess stresses off the various parts of the spine and allowing them to move freely, similar to the way traction in hospital can free the back from inappropriate strains and pressures so it can move freely.  One additional result is that the circulation to the head through the neck is improved. Consequently the movement of qi around the body becomes more noticeable. 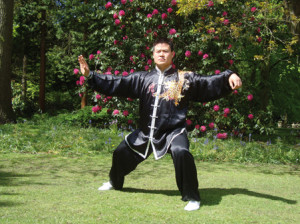 There is a famous taijiquan saying xu ling ding jin, (which can literally be translated as ‘empty leading upward energy’.) Its most common English meaning is “the crown / top of the head is pulled upward as if suspended by a string.” Chen Xin’s explanation uses the image of a string pulling upward the bai hui acupuncture point (at the rear of the crown of the head.) When the head is as if suspended or raised upward, the resulting position of the head enable it to turn freely and aids the balance of the body.

So to summarise, ding can be considered the principle that dictates stretching the spine upward to understand and maintain balance, reduce stiffness and to understand and increase both peng and fang song. This basic skill is frequently first grasped in standing exercises like zhan zhuang. The lack of motion allows the student to focus more easily on gaining the correct balance and looseness in the body.

The third and final part of this article, looking at the fourth and fifth most important two skills for beginners, (chenand chan su jin,) is available here.