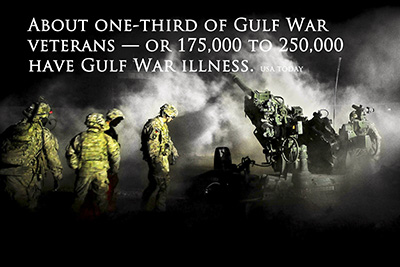 I never really knew what to expect after leaving the Army after 10yrs service and serving in the Gulf War 1990-91. Like any ex – Serviceman proud to have served for his country making the adjustment to civilian life can be quite daunting in itself. I always remember starting to experience a few health problems which many of us still suffer from.  I was diagnosed with illnesses related to my service in the Gulf War. I suffer from Gulf War Syndrome which is now recognised as a umbrella term for list of conditions including Post Traumatic Stress Disorder (PTSD), Chronic Fatigue Asthma, Nightmares, Flashback’s, Short Term Memory loss, Joint pains etc.  Many of us Gulf Veterans who were deployed out in Iraq suffer from this same pattern of symptoms. There were quite a few veterans who were not deployed but suffer the same symptoms. Many of these symptoms were caused by multiple vaccinations, Naps tablets, Depleted Uranium Poisoning, Organophosphates, exposure to Chemicals, etc.
I was in denial of these symptoms at first. In fact it’s the people around you or live with you that can see the difference in you. At times I would find myself becoming very anxious & nervous leading to irritability, and becoming fatigued with my joints feeling stiff and in pain. Following visits to my GP and a local Psychiatrist, I was referred for treatment and assessment to Combat Stress (an Ex- Serviceman’s Treatment Centre in Shropshire).
It was during my first admission to Combat Stress that I was introduced to the gentle art of Tai Chi and Qigong. I always remember seeing an advert on the activities notice board displaying a Tai Chi & Qigong session. I had no idea what it was about but I wanted to give it a try. The session was led by Lesley Roberts ( Lifestyle Tai Chi) taking us through a warm up and then teaching us the first moves of the 18 movement Shibashi Qigong and finishing off with some seated meditation. I had no idea what was going on and just followed the exercises, but I distinctly remember afterwards being so relaxed inside that I fell asleep in my room. It was my first experience of abdominal breathing which I felt a calming effect and to add to this I noticed tension and pressure which I felt in my head had reduced quite a bit.  I carried this on during my stay and took part in these sessions on future visits. It became clear that I felt an improvement both mentally and physically from taking part in these sessions.

How Tai Chi & Qigong has helped me 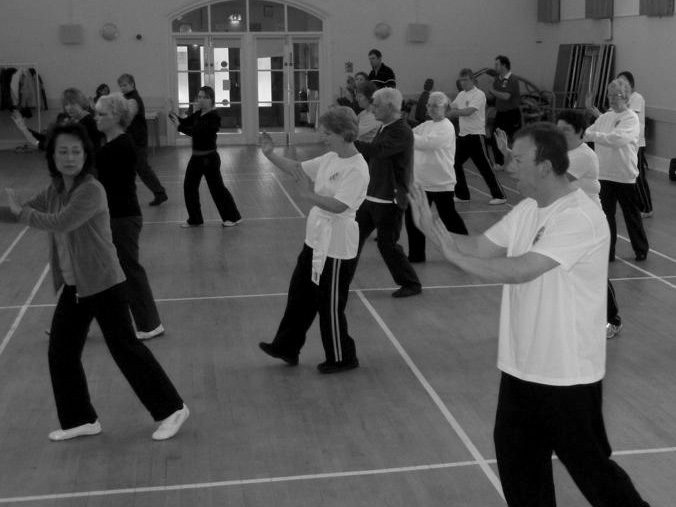 Anyone who has experienced any kind of trauma often finds themself being a part of a vicious circle with the feelings of being stressed not only starting to affect the mind but also causing physical ailments in the body.  In my case Joint Pains, Chronic Fatigue, Asthma, Headaches etc was triggered off by the onset of stress.  I never substituted my NHS treatment but instead used Tai Chi alongside it. I found this a very useful strategy for me to move forward as I had to emanate from this circle and break the chain.
When the symptoms of my PTSD were at their worst I would find myself suffering panic attacks in crowded places along with having regular nightmares and flashbacks,. To add to this I would panic at the slightest loud bang and even to this day I am not fully comfortable around fireworks as they have a different meaning to me. I always remember being in a local supermarket and panicking as I felt trapped and surrounded by trolleys. After attending the local PTSD clinic for treatment I was given coping strategies by the Doctor to help me including having elastic bands around my wrists so when I felt I was start to panic the twanging of the bands would have a grounding effect making me realise I was there. I was also told to do deep breathing and focus on something else to ground me. When you think about it, that is what we do in Tai Chi. After mastering the external movements we then look inside of ourselves and focus the mind and breathe which in turn roots ourselves.  This is what I have learned to do more over the years through my development and practice of Tai Chi and Qigong. From serving out in the Gulf I developed a fear of sand, particularly the feel of it, reminding me of the situation I was in back in Iraq. I would be very anxious on a beach and would be restless, unable to sit still and relax with my family. I have learned to control this better now using deep breathing etc to dumb down any anxiety. 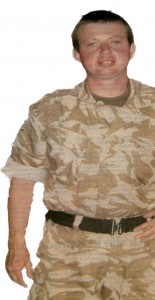 I was always considered by Combat Stress as one of their success stories in finding a path to help myself cope with my illness. They put a great deal of my improvement down to my practice and involvement with Tai Chi. Having a family I had to motivate myself and work with something alongside conventional treatment.  I have managed to keep my PTSD at acceptable levels although I am under no illusion the levels can fluctuate over time and there could be things happen in life that could trigger a PTSD episode.   Luckily I have not needed to go back to Combat Stress for a few years, but it is reassuring to know the service is there if I ever need it.
Teaching and practicing Tai Chi I consider to be as therapeutic for me as it is for my students.  Although I taught mainly on a voluntary basis in the community, being able to teach Tai Chi & Qigong gave me a mental focus and boosted my confidence and level of self-esteem. It also gave me a sense of learning about myself and really how practicing something regularly gave a clear sign of how I started to feel better in myself.   Tai Chi is sometimes referred to as meditation in motion and it’s this aspect of being able to relax more internally that has had a positive impact on being able to be calmer in situations. As I became more aware of the sensation of moving Qi around the body, it became more obvious to me how using your mind to move this energy helped in the healing process for my conditions.

I have to thank Lesley Roberts for inspiring me and showing me the way into my Tai Chi journey. I eventually joined a class back home in Hull and started practicing Lee style for 5 yrs, which led me to my first experience of teaching. I also trained with Lesley learning to teach Dr Paul Lam’s Tai Chi for Arthritis form.  .Although teaching mainly on a voluntary basis, I really enjoyed teaching people and passing the benefits on to others. In 2006/7 I was put in the position where I had to change paths on my journey, but as one door closed another door opened. I was fortunate enough to meet Carl Bateman a Sun Style Tai Chi Teacher who is trained by Dave Martin who in turn was taught by Sun Jian Yun. I was introduced to Dave Martin at a seminar to which I started to be trained in Traditional Sun Style Tai Chi as taught by Sun Jian Yun. It was an honour to become an Instructor of Traditional Sun Style Tai Chi and carry on the tradition of passing it on to others.  I feel it necessary for my own development, not only to train with Dave Martin, but to gain knowledge from training with other teachers as well. Attending events like Tai Chi Caledonia has added knowledge to my learning and it’s something I will keep on doing. I have just set up Hull Sundragon Arts in Hull where I teach.my classes.  It is my aim to expand and promote Sun Style Tai Chi and Qigong in the area. Being a Gulf Veteran, it is my goal to work with some ex Serviceman offering Tai Chi & Qigong. A challenge in itself but I know from my personal experience how finding this path has been a positive step forward for me.

Shaun and I first met when he joined one of my Qigong sessions at Combat Stress where he attended twice weekly sessions.  Although he had never done Tai Chi or Qigong before it was from the outset that Shaun managed to immerse himself deeply in the tranquillity of the moment and find a connection with the gentle movements without hesitation.
With each session that followed it quickly became clear that Shaun had a natural aptitude to the gentle rhythmic movements whilst also being able to find a peaceful release, emerging from the sessions uplifted and calm.

As the years passed Shaun’s practice became more purposeful and skilled making it evident that Tai Chi had become a way of life from which Shaun explained he was gaining tremendous benefits.  As his teacher I observed his confidence growing, his body becoming more flexible and could sense that he was generally much more at one with himself.
Without hesitation I encouraged Shaun when he asked to come along to the instructor programme, confident that with his calm demeanour and positive ways he had the makings of an excellent teacher. I believed that through helping others he would find many of the answers he was looking for along the pathway of his own amazing journey through Tai Chi.  That through his own self-motivated journey he could see what might be possible for others to achieve too and would be a shining example and inspiration to his students.
Shaun has become an experienced and talented instructor of whom I am tremendously proud of .and humbled to think that I was that connecting link that helped him to take those first early steps along his journey.  We never know where our journey will take us but I am sure that we will remain Tai Chi Buddies always.