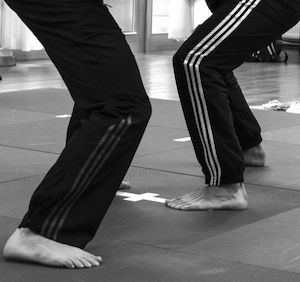 I would like to supply an insight as to why fixed step push hands is essential to Tai Chi practice and advancement, respectfully countering the points made by Mr. Nick Walser in his article (which appears elsewhere on this website and previously in Tai Chi Chuan & Oriental Arts magazine) entitled The Big Push.

It is a tremendous boon to have a magazine like Tai Chi Chuan & Oriental Arts devoted to Tai Chi where all of us can examine and discuss various opinions and experiences related to this endlessly fascinating art. And in that spirit of open debate, I respectfully disagree with Nick and urge exactly the opposite perspective on fixed step push hands.

Don’t bother with moving step – focus like a laser on fixed. I believe, in fact, that fixed step is the most critical piece of push hands precisely for the reason that the complete restriction is both a) the ultimate test of your kung fu, and b) the concise embodiment of where the art is to take you in its expression as a martial art.

It is because of this complete reductionism that Cheng Man-Ching said of fixed step push hands, . . . “It is all you need.”

Note that Professor didn’t say it is most of what you need, or mix in a little moving step push hands to get the feel of a real street fight. He said, and I take the liberty of interpreting the full import of his meaning – when you are serious about tai chi as a martial art, you don’t need anything else. Fixed step push hands will get you every skill set that you will need to well-handle yourself.

I saw this quote in an old Shih Jung Newsletter (Cheng’s school) from the 1970s, just before Cheng left the United States for the last time and travelled back to Taiwan where he passed away.

My credentials are those of a serious student and a senior long distance student since 1988 of Ben Lo, Cheng’s senior student.

I can completely understand Mr. Walser’s attitude about the apparent limitations of fixed step push hands. To quote Maggie Newman, a senior Cheng Man-ching student from New York City Shih Jung – “Tai chi seems a fantasy.” Indeed, to think that we can learn serious martial arts from an exercise wherein we never move our feet when we face even a wildly-swinging assaultive appears to be a fantasy or an exercise in impractical insanity surely that will earn dubious results.

But this shorthand glosses over critical issues that cry out for the attention and appreciation of every serious tai chi student.

To begin with, and again to quote Cheng Man-ching, the “ultimate” expression of tai chi as a martial art is Jie Jin, or “receiving energy.” Jie Jin means to take in the opponent’s energy and then to issue it out back to them to bounce them out or throw them down. This means that, where Tai Chi is trying to take you is to the place where you are so incredibly stable in your standing that it doesn’t matter where or how your opponent attacks you, you are able to absorb that energy and fire it back. No dancing, no skittering or slipping around or scuffing your knees – you are as solid as a column connecting heaven and earth.

No matter what they do – you demonstrate such body integrity (root and internal power filling your body and limbs) that nothing disturbs you. It seems incredible. It seems a fantasy. . . .

Of course, this is a higher level of the art in an art that, because its motile force is the honing of an aspect of unmeasurable consciousness, takes 10 times longer than regular kung fu to manifest.

But by practising with fixed steps, you not only learn at each practice how far you are from the pinnacle of the art, but you also piece together the host of lessons on internal physics that get you there. It is a process that cannot be cheated. And the lessons are such that moving step push hands simply will never duplicate. 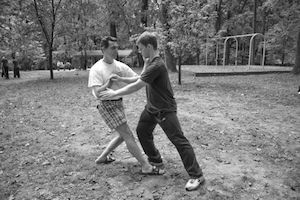 It is my humble opinion that you handicap your tai chi progress every time you avoid fixed step push hands, though it may strike you as so frustrating and “impractical” for you, and also that it is a “fantasy” that anyone could ever make much of this practice in an open fight.  Think of it, if you like, as fighting or responding in a tight space. Later, when you have more space, you are more powerful, efficient and confident given the restrictions you intentionally placed on yourself.

Every fixed step failure to keep your place is a reminder that you suck. I get it. . . . But these realities provide indispensable guidance.

It is my opinion that tai chi is so hard to learn that anyone who thinks of whipping it out for a street fight until they have attained some level of skill ought to have their head examined. You should get good with your dukes or learn some jiu jitsu or other more practical art until such time as when you practice fixed step push hands people of all body shapes and weights and athleticism really make a lot less difference to you than they should.

I have inserted a link at the end of this piece of me doing fixed step push hands with my friend, Aron Green, who weighs literally two of me. Tai Chi is here to teach me lessons about pushing with Aron that I will simply avoid forever if I don’t get in there and mix it up with him. How do I keep a guy that size and strength off my center, and what do I do when I locate his center? If I run – I’ll never get it. 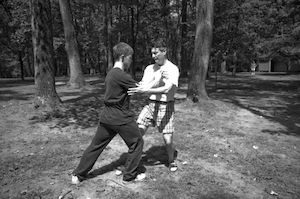 Tai Chi practice leads to a development of something internal and substantial such that your physical mass makes less of a difference than it should. Your mass and power defy your physical stature. It is hidden; it is internal.

In push hands, the less you need to yield and wiggle around and sit back to absorb, the more you are getting it. (But sitting back and doing the “eat bitter” of hard working your legs is indispensable in the eyes of Cheng and Ben Lo, and it helps you faster along the path).

Avoiding the defeats and lessons intrinsic to the art by shunning the handicap, the trial and the challenge, of fixed step push hands will profoundly retard your progress.
As my teacher Ben Lo so elegantly answers to the question, “Which is the best way?” he responds – “Which is the hardest way? . . . That’s the best way.”

The hardest way to do push hands, and to fight, is not to move your feet. If you are shuffling your feet around to neutralize a force, you have NO IDEA if you can neutralize with the innate power that slowly builds from Tai Chi kung fu. As that internal power builds, you also have to learn how to use it.

I say embrace fixed step push hands and leave moving step. In my 24 years (I took off 10 years) I’ve virtually never worked with moving step push hands, and I never had an interest because of what I heard and was taught, and I stand on my experience still that it is a near-useless distraction. Tai chi won’t help you in a fight for 20 years anyway. The test – is absorbing anything without ever having to bother shuffling your feet. Imagine that!

Nothing could be harder. Nothing else is such an elegant expression of true martial prowess. As Professor said of Jie Jin and Tai Chi – “It is because of this that this art is called ‘Supreme Ultimate’.”  Take your lumps and keep your eye on that prize.