I had a dream. I found myself in a competition where Tuishou was not the antechamber of powerlifting.

This Tuishou competition was open to all without categorisation of weight, age or sex. The rules were dictated by the classical treatises of Tai Chi Quan. This Tuishou was soft, flexible, powerful but without violence. Muscle strength was absent from the exchanges. 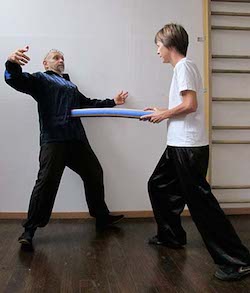 Out of this dream was born the desire to create a unifying Tuishou without violence, with rules forbidding the use of brawn.

According to legend, the originator of Tai Chi was Zhang Sanfeng, a Chinese Taoist monk. On observing the combat between a crane and a snake, he was inspired to create Wei Wu Wei, “action which is not action”, an original concept in martial art. Later, others recaptured this principle in creating a new martial art called Tai Chi Quan.

How can “action which is not action” be interpreted in the practice of Tai Chi?

Opinion is divided, but for me there are two ways to construe the phrase. The first is in defence. We accept what our partner does and exploit the weaknesses in his attack, using his own momentum to take him down in the direction of his onslaught. It is he who generates his own defeat.

“In the attack lies the defeat”

The second is to relinquish control. In this case the action achieves itself. One relaxes the body partially and allows natural movement to come about without mental interference. In correct usage this method can beget all the gestures of Tai Chi. There is no exertion; the attack is born of relaxation.   In French, the terms “lâcher prise” and “laisser faire”, difficult to translate into English, are used to describe this condition.

I reflected on how to enable practitioners to omit the use of muscular force. We can unbalance our partner using very little effort if our direction and timing is perfect. Strength becomes secondary and superfluous.

One of the critical principles that Zhang Sanfeng imparts is to distinguish the substantial and the insubstantial, the Yang and the Yin. This principle gave me a route to interpreting the void as I grasped the essence of the positions.

From this understanding, I uncovered the lines of resistance, the lines of weakness, and those lines which are variably weak or solid, according to the angle of attack.

It is noted in the classical treatises of Tai Chi: once you understand Yin (void, weakness) and Yang (solidity, resistance) in the positions, your practice will become more and more refined.

A position is characterised by the supports, orientation and balance of weight. In addition, the morphology of one’s partner has a bearing on the data relating to the direction of the void and the position of the centre. 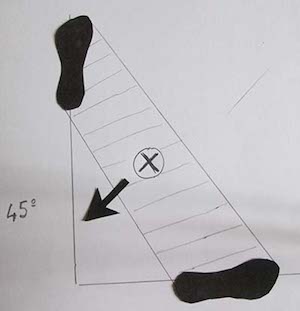 Knowing Yin and Yang in the positions, we can avoid the error of double resistance. Why over-exert oneself, when one knows where to attack and overwhelm the partner without effort?
When demonstrating how not to use excessive force in order to comprehend Yin and Yang, I utilise water woggles (pieces of cylindrical foam used in swimming pools) to push in the line of the void. They bend when pressure in excess of 3kg is applied, and thus the force dissipates. With this type of practice, there is no longer any age limit; anybody can push 3kg.

“An eighty or ninety year old man can still defend himself” 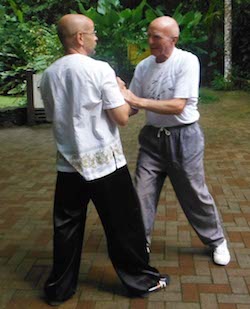 However, in the practice of Tuishou, it is easy to compensate for errors in the angle of attack by using physical strength. To employ “action which is not action”, perfection is required. It is necessary to detach oneself from muscular effort in order to understand the essence of this principle.

Knowing the correct techniques does not of itself prevent us from applying too much effort and I therefore had to find a way to eliminate this.

I was able to benefit from a real life experience in a botanical garden in Asia. I found myself on bricks covered with moss, which had been rendered slippery by the surrounding dampness.

In practising Tai Chi and Tuishou in the garden, I found that the slightest fault in position brought about a loss of control. Using my strength led to my sliding endlessly. However, if I took a correct position and did not use too much muscular effort, it was possible to practice.

Gaining from this experience, I have created a similar surface for the practice of Tuishou Soft. I use fibre boards covered by sheets of plexi-glass, which together create a perfect slippery base. I recommend this method, which prohibits the use of excessive force and thus realises my objective.

“Excessive force is banished by the use of slippery surfaces” 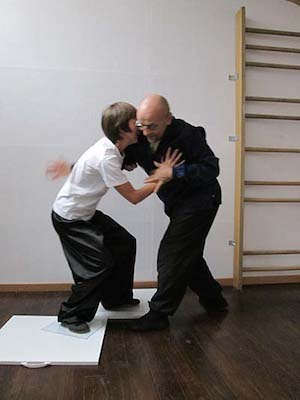 In practising Tuishou Soft on the slippery surfaces it is no longer possible to attack or resist forcefully; from the moment one steps on to the surface, the exchanges become supple and powerful but without violence.

The partners move with lightness and agility, no part is defective, deficient or excessive. The body reacts to the slightest agitation.

The movements originate in the waist and spine. Gestures curve and spiral without pause, like a turbulent river.

The substantial gives way to the insubstantial in the exchanges. Refinement of the practice ensues naturally and effortlessly.

Attention: the slippery surfaces can be dangerous if not used correctly

The boards also have concealed benefits. They can be used to showcase the verity of the received wisdom concerning body position in Tai Chi.

The positions are self-correcting. Too wide, too long, too tense – one slips! Incorrectly executed technique is immediately punished.

Often, people stop practising Tuishou as they age. Accustomed to using their muscles, they find that as their physical strength diminishes, they are no longer able to confront others. They therefore have no choice but to discontinue. 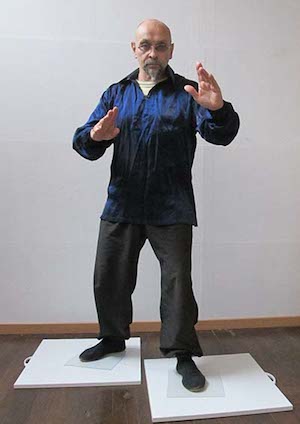 Thanks to Tuishou Soft, the practice can be extended and democratised, allowing entry to practitioners who are currently repelled by an activity where power gains over flexibility.

In my opinion, the learning process for Tai Chi applications and Tuishou should focus primarily on comprehending the substantial and insubstantial.

If we know that we can unbalance any partner with a pressure of 3kg, perhaps we can cease pushing each other like brutes and trying to blast our way through an open door.

Refining our practice, we can avoid the use of excessive force. Tai Chi and Tuishou performed in this way remains efficacious. Senior practitioners can rival their more youthful partners, women are on the same level as men. Everyone can enjoy themselves whilst their technique progresses.

“practice a Tai Chi which employs the original principles

This is my research and my practice”