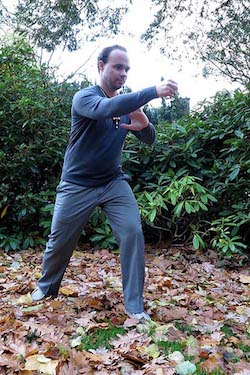 Adam Mizner recently appeared on the tai chi scene, predominantly via a few well-placed videos and links to websites containing minimal information other than video film. The films seemed to focus on push hands skills where his ‘opponent’ was bounced across the floor, often violently with what seemed to be minimal touch or force. By contrast one clip showed a quiet, internal and deeply connected hand form routine, which, for me, showed more of his tai chi skill than the dynamic push hands demos.

Adam was invited to Glasgow to conduct a weekend seminar by Alan Skirving, a local teacher and I joined them for dinner and conversation and then dropped in on his workshop at lunchtime when we conducted the following short interview.

Maybe we could start by you telling us how you got into this business?

When I was a teenager I, like many other teenagers, went down the wrong path and I needed something to straighten out my life and I happened to choose kungfu. My kungfu teacher at that time said to do tai chi, so I did, and we went from there.

So your purpose for getting into kungfu, did it have something to do with the potential of gaining a sense of discipline? 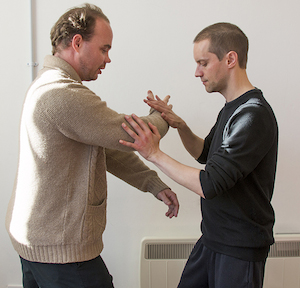 That’s right, it was for discipline and character development.

What age were you then?

That was pretty astute at 16 to realise that maybe you could develop your character?

Well I went the wrong way hard enough to get a little bit of an awakening.

Can you talk a little bit about the teacher and why you chose him?

He was the best martial artist in my state.

What was it you trained in and how did it fit with your expectations of what you were looking for? 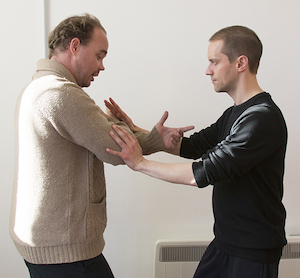 It absolutely did. It was a very hard-core external kungfu system, with a lot of torturing of the mind and body to basically make a man of you. It taught you how to discipline yourself which was exactly what I wanted.

With respect to discipline and character development was the fighting complemented with meditation or something of that nature?

Not at the school but I started doing mediation within the first month of attending.

Okay, so whilst that background may have been interesting at the age of 16 it doesn’t make it special or link us to where you are now, so what was the journey you went through to attain the skills you have now?

I trained in that style for four years or so and then I dedicated myself fully to the study of tai chi and continued to study hard. 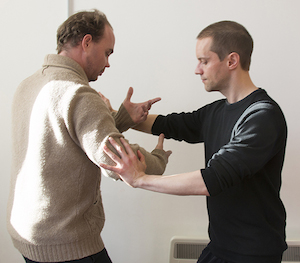 Where were you living then?

In Australia, on the Gold Coast.

Were there a lot of tai chi teachers around there then?

No, no. What actually got me fully into tai chi was a video of Master Huang. That convinced me that it was an art I wanted to study in depth.

How often were you training?

At least a few hours every day, training before and after work, training as much as possible.

So it gave you a sense of the need to work hard to achieve what you wanted to learn. Did you then move to other teachers to change your perspective of what you were doing?

I met other people who were training in tai chi and through them I met other teachers, which led me to further investigation, specifically into Master Huang’s method. As the years went on I met other teachers from other Yang style tradition and kept searching and learning as much as possible.

The thing that you’ve come here with is the push hands aspect, which is your main thing now and seems to be what you’re focusing on. However whilst this aspect of your work is very clear and very interesting, what got me (from watching your video) was the quality of your form.  Often if there is a strong emphasis on one aspect the other part may be less but I was really taken with your form and that was where I could really see that you had something. 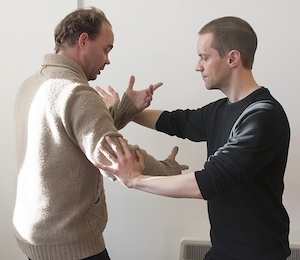 At workshops people may not do the same system so we don’t work on form.

So the pushing hands aspect is embedded in the foundation that we train in the form?

Absolutely. The way we cultivate the ji ben gong the basic body skills, the form and all the exercises is all in accordance with the way we push hands and the way we fight. They’re all harmony. We don’t do the form one way, and apply another way.

How would you train the form? There are many ways in which people train with tai chi but I get the sense, and I haven’t worked with you, that you do a lot of training in structural work, a lot of attention to where the weight is and that kind of focus?

The first thing we do is train to open the body, so that the joints are mobile and the body is ‘sung’, as well as standing work to sink the qi, that’s our first doorway.

With the opening of the body, are you doing exercises specifically for that?

Yes, we do stretches and joint-opening exercises and ‘sung-gong’ exercises to change the body so that it can become ‘sung’ and you can sink the qi to the dantien and then to the feet. Then you’re capable of attempting to do tai chi form. If your body is not open then you can’t sink the qi, even if you’re doing the form it is not tai chi chuan.

Once we have the basics and the body capable of doing tai chi then we work on the specifics of the form; namely the structure, the coordination, working on the body as well as the ‘sung’, the qi movement at a later stage then how to produce internal power.

I’m assuming that there will be an almost organic weed-out process about who continues to work with you? What I often see is that people want to be able to perform a form and they see that as end result and because of this their form is nothing.

I usually don’t attract those people in the first place and if I do then they only last one lesson.  The work is quite bitter and if they really don’t want the result of internal gongfu then they’ll leave very quickly.

Where is the starting point for the work you do on push hands? 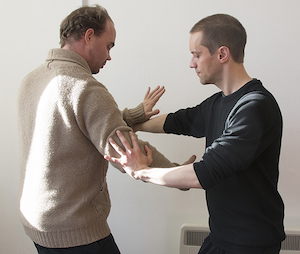 We start them very early on. Not in the first few lessons but once they have some ‘sung’, some body shape then we start pushing hands very early. I want them to have an idea of purpose.

At this early stage are you using the work of push hands to help them to learn the structure of the form?

We do structural testing and things like that so that the push hands informs the form at basic level, otherwise it’s hard to self-correct. If something looks correct and feels correct it doesn’t mean that it is correct. It’s important to have feedback in your training all the time and partnerwork is that feedback.

Have you found, over the time that you’ve been working, that certain behavioural patterns are coming from people that won’t work that immediately shift out, then you’re very quickly then getting to an open vessel that really begins to understand the root that can grow and help them to develop, rather than bringing all the history of the things that impede them.

The way we train is completely and utterly based on letting go, on releasing tension mentally and physically and the process of letting go can be very bitter. If people don’t have their heart set on letting go then they’re not going to hang around.  From the very beginning people understand that everything we do is letting go, letting go all the time. We developed this quality in the way we run the class, the way we train, and it’s all about letting go. Any kind of ego or holding on to things you’ve kept from the past, it doesn’t work.

Have you, or any of your students participated in competition push hands? Is that an interest?

No, it’s not of personal interest to me, I kind of think it’s a paradox. To me it’s just a training exercise. It’s a little bit like a boxer entering a skipping competition. I think competition is fine but it should be fighting. If you want to compete you should fight. Pushing hands is a training tool for martial arts, not an end game.

I agree wholeheartedly. The problem with a lot of people’s pushing hands is that they see it as a competition and it isn’t, it’s a training exercise, end of story.

So let’s explore the training aspects, what is there to learn from pushing hands?

In my process, and the way we train in my system, is really about changing the body and changing the mind to create what I like to call the ‘tai chi creature’.  You’re changing what you are; not just learning a skill set but also in changing the mind and body and then whatever you do is tai chi chuan. The process of doing this is firstly in opening the body. Second is sinking the qi. Thirdly is mobilising or moving the qi, inside the body, to create the different powers and skills. All of the training work, be it form, push hands or martial applications is geared directly towards manifesting that qi in the mind and body. That’s all we do, everything is about that. We don’t do anything just to build a skill or trick, it’s all about changing the way you move, how you do things.

All martial artists kick, punch and throw, we all have limbs and a torso but how that happens is what makes the internal internal and the external external. It’s the how that matters, not simply the what.

You’re changing your mind, your personality, your conduct, it changes who you are. That’s exactly what I mean by mind and body change into something. Because you’re training ‘letting go’ first by itself ‘sung’ and then, more importantly under stress when somebody puts pressure on you. First it’s cooperative pressure, and then non-cooperative pressures all the way violent pressure. If you can relax, let go and release under pressure it changes who you are at a fundamental level and this is the true benefit of tai chi. Being able to bounce people across the room is great fun but it can’t compare with being at peace.

Demonstration during the 16th Push Hands Meeting in Hannover, Germany.