In 2002 William Nelson staged the Cheng Man Ching Congress/Forum in Périgueux, France to celebrate the centenary of the late Professor. William had gathered together a group of individuals who were close to Cheng Man-Ching, close students, tai chi colleagues and members of his family.
With the help of William CC Chen I conducted short interviews with many of these eminent visitors including this brief conversation with his daughter, Katy Cheng.

Could you tell me how it feels for you being the daughter of the great Grandmaster Cheng Man-Ching?
I really appreciate the legacy of my father. He was a master of many different disciplines: Art, Poetry, Medicine, Calligraphy and Taijiquan. He really liked to teach Taiji most of all, to bring good health to the world.
How old were you when you first became aware of Taiji?
I first began to do Taiji when I was three years old. At this age my father said that I was too young to learn but I said, “No, I’d like to learn right now.” I saw all those people doing Taiji and I became interested in learning it too. My father said that he wasn’t going to wake me up, but if I was there in morning, he would take me up to the mountain to learn with the other students. Every morning I would climb up the mountain with the others before daybreak to learn.

What did you start learning at three years old?
I would just follow my father.

When did he start to do some corrections with you?
He always corrected me and my elder sister who also came along too. Later, when I was in junior high school I started teaching Taiji. I would help to teach the boy scouts and girl scouts. 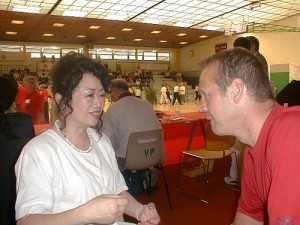 How was it for you, moving there?
I was happy to be there. We would still go back and forth to Taiwan too. At the weekends I would work with my father in the Taiji studio, helping with the corrections.
Did your father find much difference to how people in the West and people in Taiwan were with learning Taiji?
Yes, very different. My father was very happy teaching in the US. Americans were much stronger and very eager to work to learn. Many of the people that he taught in Taiwan had come to learn Taiji because they were sick and wanted to get healthy. That was the main reason people in Taiwan came to the classes. In America people were very keen to learn the martial arts. They were very healthy people who were keen to work hard. He was also able to teach them about Lao Tzu and the philosophy of the art which they were very open to. I still find the same thing today, even more so. Chinese people think it can come easy to them and they are not so prepared to work so hard to learn, often they are lazy and don’t practice so much.

How precise was your father with his teachings of the Hand Form? Was he very particular about where people put their hands, placed their feet etc.?
Yes, he was. It was important to him that people learned it properly.

So do we have a definitive version of the CMC style which we can refer to?
Each form has its principles and if the principles are adhered to, then it’s good. If you know how to apply those principles then it’s correct. If you don’t know how to use them, then there are problems.

So you work with the applications of the postures too?
Yes. But you have to connect the outside with the inside to. If you learn art, you first start from the outline and later go on to create the whole picture. In Taiji you begin with the external form and then connect with the inside. It’s like building a house, there are many aspects to consider; the external shape, the internal work, the character and the spirit. You also should also have high moral standards. It changes your personality when you do Taiji.

In the CMC style it’s often said that it’s sometimes difficult to see where the applications are. Is there anything you’d like to say about this feeling?
If you look at the two films of my father; one is when he is younger and the other is when he is older. He was doing very different things in these two films. When he was older he was teaching in a different way, using a different body with a different understanding, so things were not so evident.

How often do you teach classes?
Every weekend I teach classes but I don’t advertise and only work with a few students.

How do you feel about competitions?
Well when people compete they are nervous and their energy is high so it can give them something to work with to practice their relaxation but often it’s like a bullfight and I don’t like it much.

Well often at Tui Shou competitions you don’t see very much Taiji being applied.
That’s true. The teacher is teaching the principles correctly, and the student is learning them correctly but often under the pressure of competing, in push hands bouts, the Taiji skills disappear. Firstly you have to mentally trust that Taiji will be an effective way of self defence but they end up trying to use their own strength and that doesn’t work for them.

How do you feel about this celebration of 100 years and the development of your father’s work with Taiji?
I think it’s very good and I’m very proud. It’s nice to see so many people from so many countries continuing with his work.