Skip to content
Home » Chinese tea » Kung Fu Cha: Getting together to enjoy tea in a gentle way 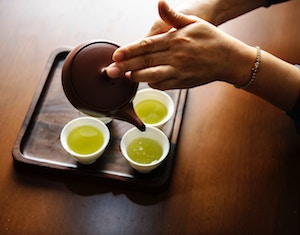 The positive aspects of tea drinking are best demonstrated in a gathering. Instead of a strictly regulated “ceremony”, which is prevailing in the Japanese or Korean tradition, “Kung Fu Cha” is built around active relaxation forms: having a chat, getting grounded, enjoying and letting go.
After a period when the old Chinese roasted Sencha in a pan (Tang dynasty) and „whipped“ Match in boiled water (Song dynasty), the 16th century witnessed the popular trend to brew tea in little teapots made of fired clay. At the beginning of the 16th century, „Kung Fu Cha“ was well-established in the southern regions of China like Guangdong and Fujian as well as on Formosa (Taiwan).

The Kung Fu of tea should not be confused with “Kungfu” known in the West as a name for Chinese martial arts. Tea is defined as “delicate, elaborate and accurate”, and the notion “Kung Fu”, when related to tea, underlines the labour and the knowledge concerning the cultivation, the production and the preparation of high-quality Oolong tea, which means it also comprises the art of tea fermentation. The whole universe of tea – tea quality, the vintage (year of harvest), accessories like tea pots and drinking bowls, even the appearance and workmanship connected to the production and the use of small coal ovens or the tea water kettles made of fired clay was – and partly continues to be today – a “science of its own”, so to say.

The tradition of tea strongly revived in the 1980s. At the same time, the inhabitants of the tea regions became consumers themselves and developed a whole new approach to tea than before, when they mainly acted as producers and exporters. The concept of healthy living emerged out of the rising living standard in these times time and paved the way for a new beginning: ecological cultivation. This trend of going back to nature walks hand in hand with the concept of Yangsheng (care for life) up until today and has had a critical influence on the development in China in the 1990s. 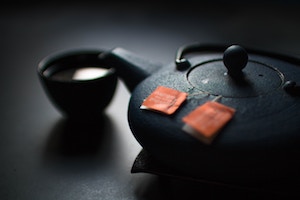 Where do these effects come from?
Effects of tea and its chemical components