Xinyiquan consist of a single standing posture and five movements 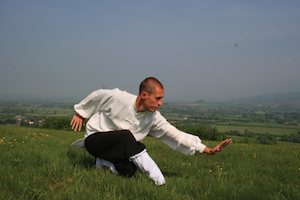 The core practices of Xinyiquan consist of a single standing posture and five movements. At first glance Xingyi can seem relatively simple in comparison to the intricate forms of Taijiquan or Baguazhang but in fact Xingyi is equally as long and complex a study as any other internal martial art.

Like Taiji or Bagua, Xingyi relies on being able to develop a strong root, correct bodily alignments and relaxing the muscles. It for this reason that the three main internal arts complement each other and practice of all three can help to develop a rounded understanding of the martial arts. All three rely on working primarily with the mind to develop and issue power although the manner in which they do this is quite different.

Taijiquan practitioners seek to develop a strong core which becomes rooted and immoveable upon contact. Xingyi practitioners are far more mobile and direct in their approach to combat. Taijiquan feels far more defensive that Xinyiquan which focuses on mercilessly attacking your opponent and driving him into the ground. Both styles complement each other and provide a practitioner with both a Yin and a Yang approach to the internal martial arts.

The key to understanding Xingyi is the practice of San Ti or ‘three trinity’ posture. This standing posture is practiced in most branches of Xingyi and can be compared to the standing post practices of Taiji which many people are familiar with. 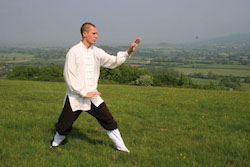 Standing in San Ti can be extremely painful at first. The back weighted stance is difficult even for experienced martial artists and it can take a long time to relax into the position. At first, the emphasis is on correct bodily alignments and softening the body so that it feels as if your bones are ‘stacked’ one on top of the other. The muscles slowly ‘melt away’ so that they are no longer being used to hold your San Ti in place. This allows your root to begin to drop down and sink into the floor which is the key to developing the internal power which drives Xingyi practitioners forward in smooth, unbroken bursts of speed. For every force there is an equal and opposite force. As your root drops down into the floor, a second force can be felt moving up from the ground into your rear leg. Over time this force increases until it feels as if your body is trying to spring forward.

Various parts of the upper body are opened or sunk so that different internal compressions are developed. Your entire torso is turned into a kind of organic spring which is coiled and ready to burst open when required. From the outside, these compressions are virtually undetectable and a skilled Xingyi practitioner will look as if they are simply stood naturally.

The elbows are sunk whilst the tendons of the hand are opened and lengthened to ensure that a Xingyi practitioner can maintain a strong bridge when in contact with an opponent. As a rule, it is far easier to develop a feeling of internal force in Xingyi than in Taiji although it is a very Yang type of power rather than the Yin internal force which is required for manifesting the various Jins of Taiji.

Breathing exercises are then introduced into the standing practice of San Ti. Consistent practice helps to open up the various energetic pathways of the body and take out any tensions which may be stored within the muscles and tissues. Xingyi power is delivered in a wave which is usually driven from the rear foot (although not always), up through the spine and out to the hands. If there is un-necessary tension then this creates a ‘break’ in the chain of power and so the internal force will be negated or worse still stored within the body which can result in injury. When I first began, I was too fast to try issuing the quick explosive strikes of Xingyi and so I was left with headaches resulting from my neck and upper back taking the force of my Fa-Jin. I quickly learnt that this was quite painful and so returned to standing practice so that I could continue with the softening process!

Once a person has developed all of the compressions and springs required for Xingyi practice from their standing, they may begin to study the five techniques from which the entire of Xingyi is derived. These techniques are known as Pi, Zuan, Beng, Pao and Heng. They are five different directions of internal force which are likened to the five elemental processes which are so important within Traditional Chinese Medicine. Rather than being exact techniques which can be applied to combat, they are a training method for developing effective power along five planes of movement. From this base, further techniques and forms show how these five powers are applied to various strikes, kicks, locks and throws but these are considered of secondary importance to the five main movements. 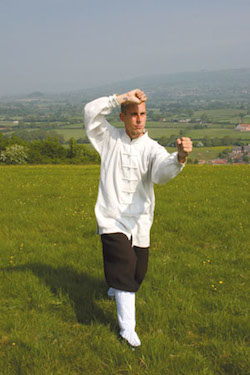 Each technique is studied from the San Ti posture which you will most likely have practiced for some time. Now the initial softening, aligning and rooting procedures are repeated whilst moving. It is frustrating to see how quickly all your long-practiced alignments move out of line when you begin to move forward. In particular the legs tense up which creates an unhealthy ‘jerk’ as you move forward. Xingyi relies on a downward force being delivered through the feet which ‘bounces’ back up through the body and creates the striking power of the five elements. If your legs are not soft and correctly aligned then this force will simply not get through your body up to your hands. At first this downward force is dropped down through a relaxed ‘stamp’ but over time this is normally taken out so that the steps look as soft as those of Taiji and Bagua.

Prior to my training in the internal arts I had been learning external martial arts for some time. I was used to using gross physical movements such as large waist turns to put power into my punches. When I came to Taiji these waist turns were trained and then shrunk down and internalised so that power was delivered from the Dan Tien area. In Xingyiquan I now had to learn how to use the mind to lead and direct force from the floor, through the body and out into the hands. It feels something like a combination of the two methods mentioned above and yet has a distinct feel of its own at the same time.

The key to delivering power within the five techniques is finding a path of least resistance for the force which wants to drive you forward from the rear foot when you are standing in the San Ti posture. Like water working its way through cracks in a cliff top, the internal force of Xingyi is directed through the body in different directions according to your mental intent and the physical shape of whichever technique you are practicing.

The second technique, Zuan, sends the force from the rear leg up through the lower back, into the abdomen and then the lead hand which spirals upwards. The movement of Zhuan massages and tonifies the kidney area which brings countless health benefits.

Beng is practiced next. This technique sends force up into the middle of the torso; it is then spiralled out in a straight line through either arm. The resulting force from this movement creates a powerful punch which can do great amounts of damage to an opponent. It is usually the finishing strike within most Xingyi practitioners fighting strategy. The compression and expansion of the centre of the torso in Beng has positive effects on the liver. Even within some Qi Gong sets, regular punching techniques are used as a cure for an imbalance of liver energy.

Pao is an expansive movement which utilise an equal amount of force in both arms. The force travels from the rear leg, up through the chest which acts as a large spring. The chest delivers the force diagonally into the arms which travel out into a simultaneous block and strike. Due to the chest being compressed and expanded, Pao practice helps to maintain the health of the heart and pericardium.

Heng is the final technique and easily the most difficult. Even though the external movement is quite simple, Heng relies on begin able to bring force from the rear leg into the abdomen before sending it sideways on a horizontal plane whilst the body moves forward. This change of internal direction within the abdominal cavity is easy to get wrong which will mean that the internal force is dissipated and your arm will move horizontally with no internal force whatsoever. Heng has a positive effect on your spleen when performed correctly.

These five techniques teach how to effectively send internal power in numerous directions according to the whim of your mind and intention. It is an amazing feeling when you manage to co-ordinate the movements of your body, mind and breathing for the first time. Your body feels as though it is exploding forward into your strike as if powered from your insides! Even a little success is enough to get you hooked on these five simple movements and San Ti standing. It is surprising how many hours you are willing to while away stood in a park or marching up and down repeating the elemental strikes once you have had your first taste of the explosive internal power of Xingyi.

I should point out that the majority of training is in Taijiquan and I have only been practicing Xingyi since 2005. I would never profess to be an expert on the system but I can highly recommend learning San Ti standing and the five techniques mentioned in this article to anybody who wishes to gain a broader understanding of the internal martial arts in general. I have certainly found that my Taiji training has benefitted immensely from the Xingyi I have done to date…

is the Director of Lotus Nei Gong is based in Wrexham, Wales and teaches in the UK & Sweden.