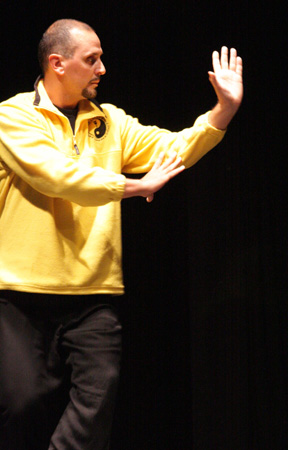 The origin of the term ‘Internal’ with respect to the various Chinese Internal Arts is a subject of great debate. Generally the term ‘Neijia’ relates to ‘internal’ styles of martial arts, which relates to a system of ‘internal’ power as opposed to simply applying ‘external’ power of muscular force.

Internal power can be achieved by establishing a good postural position, a sense of ‘ground’ connection in conjunction with a clear sense of focus or intent when emitting ‘energy’.

The practice of internal styles of Chinese martial arts such as Taijiquan, Xingyiquan, Baguazhang, Bajiquan, Yiquan, Liuhebafa along with most Qigong practices work to develop the internal energetic system or Qi (Chi) flow through the meridians of the body.

Generally speaking, training these systems starts with exercises to allow the body to move freely and fluidly, also allowing the internal energetic system to flow without impedance. Once the body is relaxed, free and open then the appropriate postures, movements and forms can be learned and practiced in a more effective manner.

Aside from learning the relevant forms there are often ancillary exercises or practices to help develop the energetic system such as Neigong (Internal Energy Work) and Zhuan Zhang (Standing Postures) where the practitioner merely stands still, often with the arms and palms open, to create an open vessel for the energetic system to go where it needs to, in its most natural, free-flowing manner.

The main pages of Taiji Forum looks at the more popular practices just as Taijiquan and Qigong and these pages will look in detail at the other internal arts as mentioned above. Below is a brief description of the other Chinese Internal Arts.

A martial arts system based on the ‘bagua’ 8-trigam system which, as in the I-Ching (a Chinese system of divination), represents the 8 cardinal directions and energetic powers as are trained and applied during the practice of the art.

The originator of this art Dong Haichuan is said to have learned from Taoist monks during his studies in the holy mountains. Lern more about Baguazhang…

Xingyiquan or ‘Form/Intention Boxing is characterized by its straight, linear, sharp movements and explosive strikes.

Although the origin of Xingyi is sketchy it is generally credited to a famous Chinese general, Yue Fei who lived in the Song Dynasty (960 – 1279).

Chen Tuan, a famous Taoist who lived in the holy mountain of Hua Shan is said to be the creator of Liuhebafa (Six Harmonies and Eight Methods). Containing the fluidity of Taijiquan, the power-release of Xingyiquan and the deft footwork of Baguazhang Liuhebafa involves the following aspects of training), (Luihe) Six Harmonies, (8 Methods), Sanpan (3 Divisions), Wuzong (5 Hearts), Jiujie (9 Joints).