Many practitioners of taijiquan will be familiar with the common criticisms of the un-initiated. The conversation usually flows something like:

“So, is this stuff just for health?
No, it’s also a martial art.
How can that be useful for fighting? Are you going to beat me up in slow motion?” 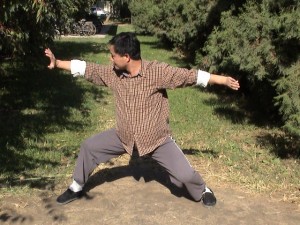 A similar experience also greets the Bagua enthusiast as they practise their trade mark circle walking. Even some practitioners it seems are unsure as to why the circle walk is so important. “It’s Bagua isn’t it? It’s done in a circle, that’s what makes it Bagua!” It is here that Ma Gui’s branch of the Bagua family comes into its own. For the Ma Gui system has a rich and detailed rationale and methodology underpinning its circle walking practise. Now, thanks to the efforts of Canadian martial artist Andrea Falk and her teacher Li Baohua, this little known branch of the family is being brought out of obscurity and into the west. 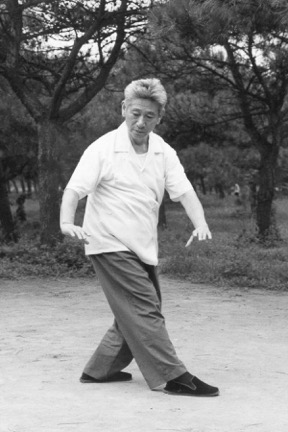 Ma Gui (1852-1942) was a student of both Yin Fu and of Bagua’s founder, Dong Hai Chuan (1813-1884). Unique among Dong’s students, Ma Gui had no previous martial training prior to learning Bagua, having started training at the tender age of twelve; as such he was taught bare bones Bagua, designed to build a Bagua body from the ground up. It is the legacy of this basic no-frills training that has been carried forward by the subsequent lineage holders of the Ma Gui lineage.

It is worth noting that even in China some people still regard the Ma Gui lineage as a lost branch of the Bagua family. This was largely because Ma Gui was reluctant to teach those he thought unworthy. However, in his later years, Ma Gui fell upon hard times and was looked after by Li Shao’an, (1888-1982), a Shandong native schooled in both the Yin Fu and Cheng Ting Hua styles of Bagua. Li employed Liu Wanchuan (1905-1993), in his restaurant and both of these men received the full system from Ma Gui. From here the system was passed to Yu Zhiming (1920- ), who spent over thirty years learning the system as the apprentice of Liu Wanchuan. In 1998, Yu Zhiming began teaching the system to the current lineage holder, Li Baohua (1964- ).

The importance of Circle Walking

All training in the MaGui system starts with circle walking. This is the core practise of the system. Everything else in the system is fed by and comes out of circle walking. If your technique is deficient, you fix it in the circle walking. If your fa li (power issue) is weak, you fix it not by doing more fa li, but by circle walking. What you get with the MaGui system is a training methodology that is not obsessed with forms but instead is obsessed with building health, building power and above all changing your body. In this respect it is the antidote not only to the critics who wonder why we spend so much time in circling, but also to the injunction

“If you don’t train deep skill, in old age you will have nothing”.

Circle walking in the Ma Gui way builds your health and enables you to do all techniques with whole body power. The main effect is to bring full circulation of blood and qi to all parts of the body and in doing so strengthen the tendons and ligaments throughout the body. Another effect is to connect all the tendons, ligaments and soft tissue from the bottom of the feet through the body to where they connect to the skull. Circle walking is designed so that you never lose whole body power.

How to Circle Walk the Ma Gui Way 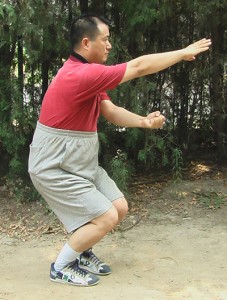 All circle walking in Ma Gui’s Bagua is done slowly, you want to “walk like a toad”. At no point do you want to look like you are skating on ice. The system contains eight animals or models for walking the circle, but the most important is Bear walking. Most circle walking is done in bear in order to build a solid dantian and good qi/blood circulation. The other models then develop additional attributes needed for the fuller expression of the system.

The following instructions are a basic guide to the mechanics of the walk; they are designed to give the flavour of the system and are best learned from a qualified instructor.

The Middle of the Body 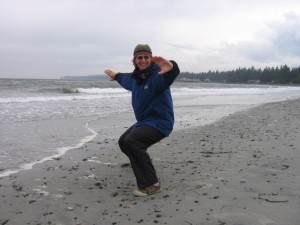 Circle walking is the engine of the Ma Gui system. It is not something to be regarded as a beginner’s basic exercise to be abandoned later in favour of supposedly more interesting forms, weapons and partner work. Ma Gui has all of these but they flow directly out of and are powered by the transformational practises derived from walking the circle.