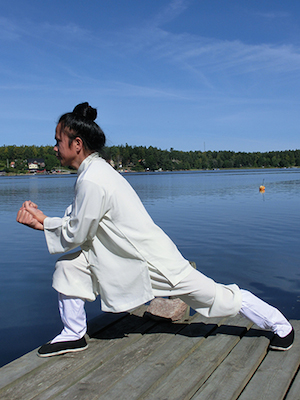 The XinYi martial arts system was brought forth from Daoist society to the general public during the Five Dynasties and Ten Kingdoms period by Chen Tuan陳摶, ancestral master of the Daoist Hua Shan Yin Xian Pai 華山隱仙派 (Flower Mountain Hidden Immortal Lineage). During the Song Dynasty, it was Master Zhou Tong 周who passed this system on to Yue Fei 岳飛 – Yue Fei later became one of the greatest military generals in Chinese history.

During the Qing Dynasty, Master Ji LongFeng 姬隆峰 discovered General Yue Fei’s XinYi martial arts classic and later passed the art to Master Chao JiWu 曹繼武, who then passed it to Master Dai LongBang 戴隆邦. Due to the great proficiency of his own family’s tradition of martial arts and Daoist internal alchemy cultivation, Master Dai took mastery of the XinYi system to a new level. The depth and clarity of his understanding of the XinYi martial arts system was so widely respected by other high-level martial artists that the teachings became known specifically as DaiShiXinYiLiuHeQuan 戴氏心意六合拳 – Dai Family XinYi Six Unions Martial Arts.

2. The Spirit of Dai Shi Xin Yi Liu He Quan

As I always emphasise, a traditional Chinese name carries the spirit of its object. To gain an insight into the Dai Family XinYi martial arts system, let’s look more closely into its traditional name: XinYi LiuHe Quan 心意六合拳.

Literally, Xin means heart and Yi means mind. As the name XinYi implies, we need to use both our heart and our mind to learn and practise this system and vice-versa. Practising with this martial arts tradition is also a way to cultivate your heart and mind. In both respects, XinYi is not a system that focuses solely on the mastery of physical fighting skills.

Liu means six and He means combine, combination, cooperate, unite, and union. LiuHe means “the Union of Six” and it is a Daoist philosophical phrase used interchangeably with “universe.” The Chinese expression for universe is YuZhou 宇宙– the union of space and time. In Daoist philosophy, each individual object or concept consists of three parts. With respect to the universe, Yu contains the Shang 上 (upper), Zhong 中 (middle), and Xia 下 (lower) components of space, and within Zhou, the Gu 古 (ancient or past), Jin 今 (modern or present), and Lai 來 (future or upcoming) create the inseparable aspects of time. The universe itself is the union of these six factors, and the true meaning of Liu He is the union of the three dimensions of space and the three dimensions of time. 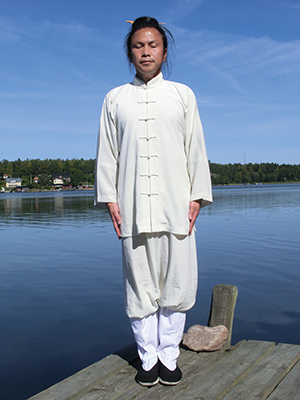 The XinYiLiuHeQuan internal alchemy and martial arts system was intentionally and mindfully created to help the practitioner emulate the Universal Way.

Quan 拳 means fist, and is generally used to represent a form or a system of martial arts. However, in the inner teachings of XinYi internal martial arts system, we learn the true meaning of Quan is not Quan拳, but Quan圈, which means circle or circular. In the XinYi system, we always practice with circular movements and use the circle – not the fist – to defeat our opponents. There is not a single movement in the entire system that does not include round patterns. XinYi Quan is a method of internal cultivation that aligns the practitioner with the circular Way of Heaven.

The Xin Yi Liu He Quan heart-mind cultivation methods provide a key to the state of Oneness, a palpable feeling of unity between human being and the Dao, where there is no difference between man and nature. In China, we describe this as Yu ZhouZaiWuShenWuShenZaiYuZhou 宇宙在吾身 吾身在宇宙 – The universe is within me and I am the universe. To awaken into this high-level martial arts state during combat trainings, we must know how to unite the three dimensions of the time and the three dimensions of the space in our body and in all of our movements.

The internal three unions help us train to instill the concept of oneness in time (past, present, and future) into our movement, especially during real combat.

The external three unions are:

Training with the three external unions helps us master the oneness of space (upper, middle, and lower) in our movements as well as making our use of space come alive in times of combat, when timing is crucial.

3. The Union of Dao and Martial Arts 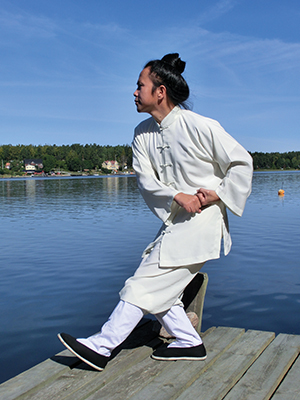 Dai Family XinYi is DanDaoWuShu丹道武術 – an internal martial arts system entirely based on the principles of Daoist alchemy. This system embodies the richness and depth of Daoist philosophy as well as being a method to explore healing, internal alchemy, and spiritual transformation.

In the chart on the next page , I have listed basic numerological relationships, Daoist concepts and XinYi internal alchemical martial arts practices for you. I hope this provides you with a clear overview of the Dai Family XinYi System.

The defining characteristic of Dai Family XinYi is the union of the Dao and martial arts. From the very start of XinYi training, students learn physical postures that help them understand the deeper layers of meaning of the system as a whole, as well as how to apply the system in their Daoist internal cultivation practice to help improve health, combat and promoting longevity.

Nourished by your spiritual root

Guided by your heart

The enemy is defeated.

And a tranquil heart 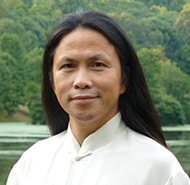 Master Zhongxian Wu, lifelong Daoist practitioner, is the recognized lineage holder of four forms of classical Qigong, Taiji and martial arts. He synthesizes wisdom and experience for beginning and advanced practitioners in his unique and professionally designed courses and training programs.