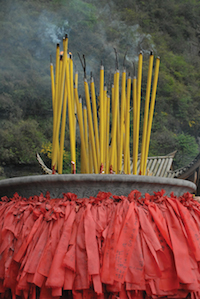 It is well known that Qigong is one of the most popular exercises in China today, but its practice is now growing rapidly throughout the rest of the world. People are seeking a deeper understanding of the mechanisms behind the visible and physical world; scientific advances have brought technologies we previously would not have perceived to be possible, and there is a belief that invisible electromagnetic forces are now able to be understood, quantified and used for human benefit. Qigong has been practiced over thousands of years and has developed experientially, only more recently has science sought to test its efficacy in areas such as transmission and reception of qi into physical matter. Indeed, the effects of qigong have been witnessed and experienced in China in demonstrations, treatment of the sick and in the bodies of practitioners in the past.

Qigong has many different aspects and forms, with some appearing to be largely physical, and some more spiritually based. Its forms include hard qigong, soft qigong, and healing qigong. Some well known types of hard qigong are Shaolin iron shirt and iron palm; some of the most well known soft qigong forms in the west are Eight Pieces of Brocade and Five Animal movements. Spiritual practices, long taught in Rujia, Daoist and Buddhist temples in China, include meditation and chanting, and mantra recitation. Healing qigong practices may incorporate the use of ritually blessed water and the use of energy projection over or on people’s bodies to cure physical sickness or spiritual maladies. These techniques are known to be useful by some areas of Chinese society, where conventional medicine has failed to produce effect. 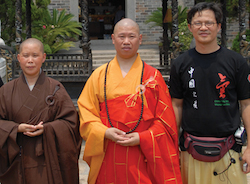 In this article I would like to introduce some examples of qigong applications, and discuss the basis from which they come. The various qigong which I present in this article have been taught to me by my masters, and some have been studied, and many other forms witnessed by my own group of students from the Europe during our annual China trip. This article will present spiritual healing qigong, Buddhist chanting qigong, and hard qigong.

Some of these skills are still kept as top secret in China today and are taught only when the master is sure that the student is of good character and ready to be taught. Whilst many people in China may know of the existence of these practices, even more have not had the chance to know exactly what these practices involve and where they can be applied. On writing this article, I sought special approval from my masters in China. It is with the kind permission from the Abbot of the temple on Nanyue Mountain, and qigong Grandmasters from Tian Men Mountain in Zhangjiajie Forest Park, Hunan province, China, that I write this, to share with you some of these profound and ancient techniques.

I began my interest in the spiritual aspect of qigong, after I had been studying martial arts for many years. Initially, in my training I had not experienced, and did not believe in the spiritual aspects of qi. In 1987, I was a vice chief attendant in a police station in my home town of Xiangtan city. One day my shoulder was injured so badly, I couldn’t raise my arm to the side. One of my colleagues, a senior policeman called Mr. Sheng, did a simple and quick treatment for my shoulder, using healing water, and putting flaming alcohol on my shoulder. Immediately after the treatment I was able move my arm around my shoulder freely, feeling no absolutely pain or soreness. I never knew  he had these skills and this experience amazed me. I have been studying spiritual qigong since 1987, as I was so inspired by directly experiencing its ability for healing.

Ten years later, in 1997, I took a group of my students from the UK to visit one of my qigong masters, Grandmaster Li Zhiyi, who worked as a security guard for the Zhangjiajie Forest Park. Grandmaster Li, knowing everyone is interested to see something special about how the spiritual qigong works did a demonstration for us. He picked up a pair of bamboo chopsticks, and a sharp Chinese style chopping knife from the kitchen. To prove how sharp the knife was, he asked one of my studends to cut the chopsticks into short pieces, and then he placed the short chopsticks into three rice bowls, and filled them up with water. Everybody watched as he offered for any three of my students to pick up the bowls, and drink the water together with the few short chopsticks. It was amazing! All three bowls of water with short chopsticks were drunk by my students! Then Grandmaster Li picked up the knife, chopping strongly first towards his chest, and then moving onto his arm and head. Everybody was shocked and thought that is the end of the show. Suddenly Grandmaster Li handed the knife to one of my students and said “come on, chop your body yourselves!” This really was quite a shock to me; I knew he was a master and as such, had acquired qigong abilities to protect himself from harm. However, I wondered how my students, who did not have this particular qigong training, could be protected from injury themselves. Eventually, two of my brave students picked up the knife and did exactly as Grandmaster Li asked. Even though the chopping was hard and fast, it did not cut into the body at all, nor did any marks or bruises remain on the skin. After the knife was put down, it was really silent, nobody had anything to say, we were all just amazed. Grandmaster Li briefly explained to everybody about how things work in spiritual qigong world. He said ‘when the chopsticks were been chopped down into pieces, the chopsticks and knife had been converted into different matter. That was why you can swallow this water down with no problem and chop your body without any hurt or injury’.

Last summer and this spring season, I took two groups of my students to visit the Dashan Buddhist temple on Nanyue Mountain. As I was an indoor Buddhist student of the Great Head Monk, Shi Baotan, who is the Head Abbot in charge of the whole Nanyue Mountain, all my students were treated as special guests. We were fortunate to be allowed to live in the temple during our stay, and joined in all the daily activities, and a specially arranged Buddhist Blessing Ceremony was offered for everybody who was on the trip. Everyone had a very positive experience of life in the Temple. 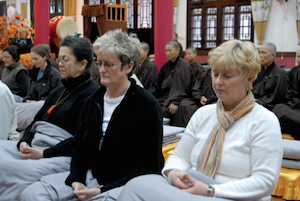 During our stay in the temple the daily schedule was as follows: at 4:00 am in the morning, all monks, nuns, and ourselves woke up and started the early morning chanting in the main hall, Da Xiong Bao Dian. 5:30am was group breakfast with food being served by volunteers. The morning was time for reading our Buddhist texts. 11:30am was lunchtime, then siesta till 2:00pm. There was another afternoon chanting session before dinner. In the evening, group chanting was led by the head monk; we sang Guan Yin’s mantra whilst walking around the meditation hall. This was a natural walking combined with chanting. Afterwards, we all took part in another group walking meditation. This practice was a very unique way to train together; it comprised of moving in a circle, with both arms swinging different distances at the sides of the body, everybody in the hall must move together perfectly, with the steps and hands at the same time. Finally there was time for sitting down quietly in the meditation hall, to meditate for about half an hour. The abbot walked around in the hall holding a stick, and checking everybody’s sitting posture was upright.

After meditation, some of us requested a healing from the monks and nuns. They recited Guan Yin’s mantra Om mani padme hum, together with Da Bei Zhou chant for us, and prepared a bowl of healing water. Normally, Da Bei Zhou is chanted for at least three times and the mantra is written in Chinese into the water, using three pieces of incense, three times. The healing water was then ready to be drank.

During our visit on the l9th April 2008, we were invited to visit a local historical qigong and wushu school, the Gui Guzi Qigong School. The ancient martial artist and qigong master Gui Guzi was the master of Sunzi  , who has created the ‘36 War Strategy   over two thousand years ago. He used to practice and train his indoor students on Tian Mengshang Mountain in Zhangjiajie Forest Park. His skills were passed on to the local people who lived there, with outsiders fearing their exceptional skills and seldom entering the area. 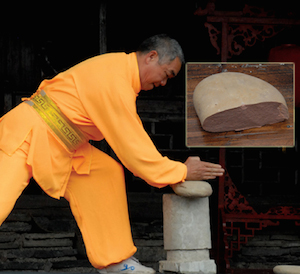 During this visit, a series of amazing hard qigong demonstrations were presented to our group. We saw stone chopping with bare hands, and sword swallowing. Another demonstration had three people lying on top of each other, broken glass underneath, and knives in between them; a huge piece of stone then was placed on the top, which was then hammered many times until the stone shattered. Whilst these demonstrations of hard qigong appear truly amazing to the eye, and seem to be feats of tremendous physical skill, there is a deeper underlying aspect to the qigong that is little understood. This is the essence of the spiritual qigong.

After the demonstration we were still so excited and invited the Grandmaster, Long Jiaxiong, together with two of his main performers, to join our group to have a lunch in the hotel. We were told a little about the training. Long Jiaxiong told us that this type of hard qigong was very unique and only available here in the country. All the performers were young people, both male and female, and they all only have been studying with him for less than three years using these unique training methods.

At the end of the meal, Grandmaster Long was so pleased to show us another unique skill, which is called ‘distance chopping without touching’. Knowing many people do not believe in force without touching, he decided to use a 100 Yuan Chinese paper note to chop a plastic chopstick which was on the table. One of my students held both ends of the chopstick in front of her body, and the chopstick was broken, by the paper note, into three pieces from the middle! It was such an amazing skill to see, and everybody was interested in how it was possible. The Grandmaster’s answer to us was that this is invisible spiritual qigong skill, and that is a skill unknown to most of the world.

As these seemingly miraculous feats of qigong were seen directly by my students from the UK, they have had an opportunity to begin to see the scope of qigong as it has long been practiced in China. Some of these things may appear to be unbelievable to many, and it is interesting that human nature sometimes demands proof of the truth behind such a skill. There are a few ways that this can be achieved. Traditionally, qigong was taught to students who experienced its effects within their bodies and their lives. Presumably, the continued popularity of qigong, both in China and the rest of the world today, is attributable to these direct personal experiences and feelings within the body. However, this is difficult to be proved in modern scientific research terms. Modern scientific skills are beginning to be able to test the scientific basis of qigong, by measuring its effects externally. It will be a challenge to understand how best to research and measure the aspect of qigong as an internal experience, and indeed if we can, as this is impossible without an appreciation and respect of the spiritual energy which works behind it.