Tai Chi DVD by Nils Klug is sold out

Tai Chi DVD by Nils Klug is sold out. You can find the whole dvd (German language) on his YouTube channel. YouTube does an automatic translation if you activate subtitles and chose your prefered language in the settings. 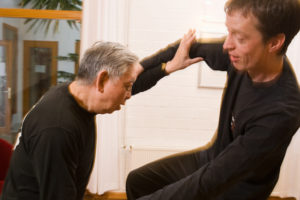 Nils Klug is a well known in figure on the European taiji circuit having organised a 10 day international tui shou meeting in Hanover, Germany for the past 4 years. In July this year he also hosted the 2nd Cheng Man Ching Congress/Forum in his native city.

Although Nils maintains an open view of approaches and styles of Taijiquan, he remains a dedicated student of William CC Chen whom he has studied with for many years. He regularly travels great distances to work with his master and often accompanies him on his teaching travels around Germany. Nils effectively portrays “the image of Three Nails in Foot” in his understanding as well as teaching Taiji. And now, Nils and, his friend, Rasmus Sievers have worked together to create a Taiji DVD of Taiji which in my opinion has a higher quality than any previously seen DVD in this genre. In fact, the film is much better than I ever imagined.

To say something negative, but also, at the same time positive, I too practice Chen Man Ching‘s original Taiji form but this version, as developed by William CC Chen, and presented on this DVD by Nils provides an interesting perspective but not something I would choose to apply in my personal practice. Nils’ approach to fighting applications is too martial for my tastes and the many blocking techniques contradict my understanding of taiji. In saying all this, I still feel that it is probably a good thing for our increasing taiji community to see other developments in this style.
Whether the viewer is student of William CC Chen’s style, or just someone who wants a softer, martial approach, using taiji skills, they will find a treasure trove of information and techniques on this DVD.

The video produced by Rasmus Sievers of the first Push Hands Meeting in 2001 attracted much attention through a successful mix of lightness, perfection, humour, and high level of instruction. 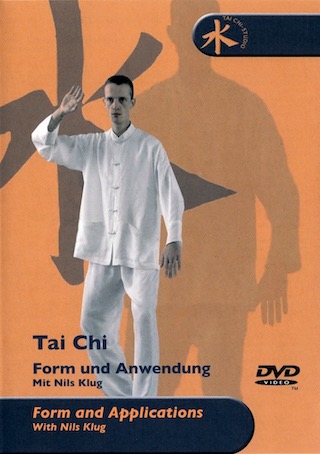 The title of this DVD is “Tai Chi – Form and Applications”. I tested it on many different computers and DVD players and it works well. This is not always the case with the many different DVD formats. On starting the video the viewer is greeted with the usual warnings against illegal copying and then you have the option to choose between either English or German language. Initially the DVD was in- tended for German production only but, on seeing it, William CC Chen suggested that Nils produced an English version. As there was little space left on the DVD, only the forms have been translated into English and everything else subtitled.

We then find a pleasant and easy menu that offers chapters on form, applications, extras and adjustments.
On the form part, it is possible to play different soundtracks from William Chen’s very difficult art of breathing, with explanations of every movement, counting of the different steps of the movements, or with nice, meditative music that quiets the mind and creates a good aural ambiance for practicing.

The soundtrack is very good quality, what is of- ten not the case with video. The subtitles present the name of every movement, making it easier to orientate oneself in the form. These soundtracks can be changed during play, which is useful if you re-run the film and listen to each aspect being portrayed

Normally, I’m unable to use a DVD without the help of my children, but this time I managed by myself with no problems!
In presenting the form, Rasmus Sievers used a way of filming that everybody should use for all the future taiji DVDs. In a corner of the screen we can see a star with the 4 directions and one of them is always illuminated. It provides the perspective of the filming point. With a simple “click” we can choose one of the other directions.

Before the form starts, taiji principles are explained, after which you given some words on William Chen ́s Three Nails Secret. Every great master should have students like Nils Klug. Before the tui- shou section there is an introduction about technique and human conditions. This speech is not at all moral or vague. In the extras you ́ll find a nice soundtrack which includes Nils ́ personal taiji story. He speaks with great enthusiasm about his first teachers, Rita Behrens and Louis Molera. I enjoy- ed this part very much because usually when taiji teachers talk about their training history they do so primarily by listing the names of great masters they have worked with rather than telling us much about their one personal journey.

A beautiful media show of Master CC Chen can be seen, with the young Nils in background.
It is possible to buy the same material on video but it would be a great shame to miss all the options available on DVD. To have no DVD player is not a good argument. For this DVD you should buy one.