Root on The Three Nails 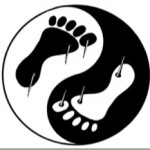 Rooting is everything. It is both base and foundation. It is one of the most important things in life. A good building must have a strong and firm base. A successful company needs a superior foundation. A healthy plant requires a healthy root. To achieve peaceful, flowing Tai Chi Chuan movements, we must have a steady firm root.

Relaxation is the ultimate goal in Tai Chi Chuan

Relaxation is the ultimate goal for all Tai Chi Chuan players. Soft, slow, gently flowing movements require a strong and firm base in the foot. Once the foot is strong and firm, the other parts of the body can move freely and stay relaxed.
When the foot is rooted, the big toe, the inner part of the ball of the foot, and the heel are connected to the ground. These three points grip the ground like three nails penetrating into the ground. I call them The Three Nails. They are properly aligned with the weight-bearing center of the upper body. They are very active and play a crucial role for major physical movements in our life. As we walk, they propel the un-rooted foot forward to make a step; if we want to turn, they spin us in a new direction. They help us serve a cup of coffee or tea. They even help our fingers turn a door key.
These three nails play different roles. The big toe is like a trim-tab on a rudder—it leads the actions. In Chinese medical charts there is a little brain that appears on the big toe of the foot. I call it the brain nail. The ball of the foot provides power, and I call it the energy nail. The heel is like an anchor, and I call it the anchor nail. The anchor nail serves to hold the entire body weight—it stabilizes your structure. It also controls your height by helping you stay on the same level when practicing Tai Chi movements.
The brain nail (the big toe) aligns with the energy nail (the ball of the foot) to assist our fingers for all physical activities. The brain nail and the energy nail are very active; I refer to them as the two active nails. They assist the martial artist in delivering punches and kicks. We need these two nails to help us to run or jump. They support Tai Chi players when energizing fingers and forming a posture. They help the fingers and hands swing a baseball bat, golf club, or tennis racket. 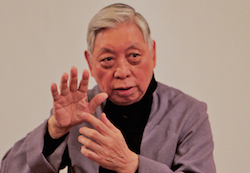 The slow movements of Tai Chi Chuan begin with a peaceful mind that transmits signals to The Three Nails, which in turn energize the fingers and move the palms. When the palms move, the waist follows and turns. The Three Nails of the foot are in command, not the waist. Although the waist is named in the Tai Chi Classics as being in command of the movements, it is from the external body’s viewpoint. When observing the moves of Tai Chi Chuan, one sees that the waist turns and everything follows. It is easy to overlook the true motion and not realize what is behind the moves of the waist. The activity in The Three Nails is subtle and hides under the foot. It is hard to notice, just like the little computer chip. There are almost no movements.
In the early 1960’s, my studies of body mechanics led to the idea that the thigh controls the movements, not the waist. I thought the thigh was in command at that time. In middle 1980’s, I began to realize that the thigh itself has no function for making moves or turns without the help of The Three Nails of the foot on the ground. When the foot is rooted, The Three Nails are in control and command the fingers to move the palms to form a Tai Chi Chuan posture. The waist and the body follow.

When rooting one should root on the “Bubbling Well” 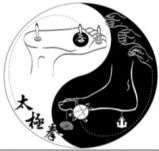 A common perception within the Tai Chi Chuan community is that when rooting one should root on the “Bubbling Well.” The Bubbling Well is a single point on an important meridian that works with energy circulation. It does not control physical actions or movements.
Based on our scientific understanding that “three points determine a plane” and “three colors make all the colors,” one can draw the analogy that the three elements of the three nails will control all physical activities. The Bubbling Well point by itself does not control Tai Chi Chuan movements.
The Three Nails on the foot form a plane that produces stability under all conditions and serves all daily physical activities. Whether we are walking, dancing, golfing, or playing tennis, the three points create the necessary stability, rooting, required for the specific activity. Without the ability of The Three Nails to root firmly, these physical activities could not be performed.
Rooting has the same effect; the rooted feet using the three nails transmit the required signals that move the body into the desired position. A color television needs the controlling magnetic field in between three electron guns to create pictures on the phosphorescent screen.
The Three Nails in the foot receive signals from the series of sequential memory shapes of Tai Chi Chuan that are stored in the mind, then transmit and magnify them through the thigh and the body, and energize fingers to form a posture.
The inner parts of the thigh muscles interact with the two active nails. When the two active nails are activated, they contract these thigh muscles; this pulls the knees together and the crotch closes as the action occurs. One of the inner thigh muscles, the Vastus Medialis plays a very active role; it is considered a jumping, running muscle. I call it an action muscle. When an athlete hits the ball, whether with a baseball bat, golf club, or tennis racket, or a martial artist prepares to deliver a powerful punch, the muscle relaxes, the knees drop outward, and the crotch opens. When the action is completed, the muscle is tight, the knees are closer together, and the crotch is closed. 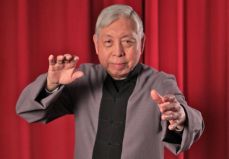 The slow movements of Tai Chi Chuan begin with releasing the inner thigh muscles that help loosen the hip joints and set the crotch free. Both knees lightly drop out while the energy and body weight sinks and rolls onto the outer edges of the feet. When a posture is gradually completed, the energy and body weight rotate back to the instep of each foot. As the two active nails slowly engage and energize the muscles, the knees move closer together and the crotch closes. This pulls the lower abdomen and diaphragm downward, which results in a nice deep inhalation and keeps the torso in an upright position at the completion of Tai Chi postures.
The energy sinks, sags, and winds into the outer edge of the foot and moves into the instep of the two active nails, and then it unwinds, floats, and rises up. This is spiraling energy. When the internal energy spirals down and then spirals up, the energy flow is like a coiled spring. The dynamic of this coil spring model is that at the end of the downward coil one must coil upward, and then coil back downward again and again. The endless motion of the coil spring is the same as the balance wheel of the mainspring in a watch that continuously spins in and out, out and in, or oscillates back and forth. This maximizes the energy flow and minimizes energy consumption. The center point of the coil spring must be firmly soldered and connected to the base, like the active two nails that help one to grip into the ground. This spiral energy force optimizes the effortless energy flow in Tai Chi’s slow movements.
These hidden components of The Three Nails in the foot are firmly rooted on the ground. They are also able to energize the thigh muscles and tendons over the leg joints and provide strength and stability for the body. They serve to transmit the body weight and provide power for such common activities as walking, running, and jumping. They help the knee and ankle joints absorb the cumulative impact of those activities or hold a Tai Chi Chuan posture.
Many Tai Chi Chuan players experience knee problems as a result of over relaxing, collapsing and sinking the body. These problems will degenerate the muscles and related tendons that support the knee and ankle. This downward pressure on the body causes exhaustion. Proper rooting with the three points allows the control signal to transmit adequate muscle energy to bear the body weight on the knee joint and counterbalance gravity. 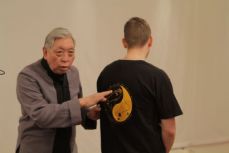 Tai Chi Chuan relaxation means “do not tense.” However, we must not be so relaxed that we collapse. The Tai Chi movements provide moderate energy compression in the body with a peaceful mind. It reduces the body’s tension, loosens the body’s joints, increases body flexibility, and animates our physical activities. Proper relaxation creates the vital energy (Chi) flows. It enhances the smooth transaction that turns the mental image into a wonderful Tai Chi Chuan form, which contains soft, slow, gently effortless movements.
The subtle and outstanding flowing movements of Tai Chi Chuan require a healthy and strong base foundation of The Three Nails. People are more relaxed and less worried when driving a car in the snow if they have the good traction of studded snow tires. Athletes must have shoes with good traction so they will be able to compete effectively. The track runner wearing spiked shoes will have higher performance than if he did not have spikes in his shoes. Golf players use studded shoes to have maximum traction and stability when swinging the golf club. The three points of The Three Nails are important components that provide a Tai Chi player with an excellent grip and connection to the ground.