February yet again saw me make my way to the Linden district of Hannover to meet old friends and new at the 15th International Push Hands event run by Nils Klug.  As often recently, I travelled with Ronnie Robinson and this time we went by way of Manchester, there still being no direct flights to Hannover from Scotland. We were not due into Hannover until nearly nine in the evening so this at least gave us the opportunity to have a reasonable meal in between flights.

For anyone thinking of attending this event in future, as well as the reasonable local hotels, there is also the option of staying on the floor of the studio for a nominal fee. This may not be the most comfortable venue but it certainly helps to keep the cost down. There are showers in the studio. A couple of friends from Amsterdam had this year booked a local apartment through AirBnB so that is another possibility for accommodation.

This event runs from Wednesday through to Sunday. The format is a choice of workshop each morning, from 10am till 1pm and then a free pushing session in the afternoon from 3pm until 5.45pm.  These workshops were spread over rooms in Nils’ studio and in the adjacent Kunsthalle, where the afternoon pushing session took place. For the first hour of this session one of the teachers would take beginners into another room to give them some instruction before letting them loose on those with a bit more experience in pushing. The tui shou sessions themselves consisted of ten minutes with one partner before changing to another. As always I encountered some familiar faces and some new ones. The thing that never changes though is the spirit of openness and sharing that prevails from old and new practitioners alike and of all ages from twenties to over-eighties. It is good but challenging to touch hands with someone you have never met before and about whom you know nothing. However it provides an opportunity to test your skills outwith your normal situation, or outwith your comfort zone, and to try to put into practice the things you may just have learned. In fact it can sometimes be a challenge to not just focus on these new things to the detriment of what you already knew! 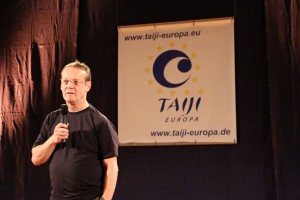 Each day there were at least three workshops to choose from. Generally each would offer a different aspect of Taiji, usually focusing on some aspect of partner work if not actual Tui Shou. So it was not just a case of choosing which teacher you wanted to work with, you could choose to look at different aspects on different days or even check out another teacher’s take on the same thing. Some workshops were just for a single day, others built on their topic over two or three days. The attendance reflected this; some people coming for a day or two and some for the whole event.  On the whole I think numbers were up a bit on last year, especially at the weekend, so maybe Europe’s financial situation is improving.

The first workshops were Ronnie Robinson, whose topic was entitled “Push Hands WTF?”, Niki Deistler exploring the 8 gates and Angela Menzel on the basics of Baguazhang.  I went along to find out WTF push hands was. After an initial discussion on why we took part in this strange activity we looked at what we were doing (and what we weren’t) and used that as a basis for looking at what we should be doing and what we shouldn’t and generally exploring ways of improving. All I need to do now is remember them when under pressure!

Over the week I spoke with some people who attended other workshops and where I managed to get some feedback I will include it here.  For example, Niki’s 8 gates workshop was apparently presented very clearly according to the person I spoke to, who had not encountered this concept before, and they found it very interesting and helpful.

What is clear, both from my own experiences and feedback from others, is that all the teachers were very open and approachable. This is exemplified no better than by my own next choice which was Wilhelm Mertens. I had worked with Wilhelm in a workshop of Mario Napoli’s some years ago and recall never having had such a helpful partner. Ever since I had determined to attend a workshop of his if I ever got the opportunity. I was not disappointed. While perhaps not learning any new concepts, it was invaluable to get a different emphasis and new ideas for how to practise some aspects of pushing. And it was fun! 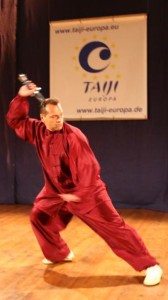 That took me through to Saturday by which time the cold that had been developing all week had spread to my chest and was giving me a permanent headache. I decided not to attend any workshops, not only because I didn’t feel I could do them justice, but my persistent cough would have been disruptive.  That meant I missed out on Barry McGinlay’s exploration of the relationship between being soft, firm, relaxed and focused which I heard was presented in his usual irrepressible, easily-understandable manner.  Also Gianfranco Pace’s workshop on the unified qi in tui shou, which was reported as being excellent: interesting, providing a new dimension to practice and demanding, but not as physically demanding as some of his work is.

I spoke with some ladies who had attended Emma North’s “Tui Shou, Just As Much A Game For Women” workshop.  Apparently Emma, as well as being evidently proficient in the subject, is clear, focused and easy to understand in her presentation and her material and practical work was interesting and helpful.

Gunawan Wibisono ran a workshop on the application of Taijiquan techniques in Tuina therapy. I did not meet any of the attendees at this workshop, but anyone reading this who has an interest in this topic should note that Roberto Benetti will be presenting a workshop on Tuina at Tai Chi Caledonia in Stirling in July.

As well as the work aspect there is, as always at such events, a social one too. There are many good, reasonably-priced eating places close to Nils’ studio and every night different groups would form to go to these for good food and drink. On Friday night, for some reason, after our meal half the people staying in our small hotel ended up in our room. Perhaps it had something to do with us being Scottish and feeling obliged to bring with us an exclusive example of our national drink to share!  Another highlight of this evening was Barry providing some lucky people with massage/stretching therapy.

Saturday night at this event is always reserved for the gala. This is where the teachers, and sometimes students, display some of their talents, be they form, weapons, or partner work, all accompanied by Henk Janssen’s improvisational guitar music. As well as those attending the event, this year Nabil Ranné came along to demonstrate a Chen form. In addition to a number of others demonstrating various forms, Margherita Padalino performed an impressive double sabre form while Gianfranco Pace showed us a dynamic single sabre form.  Niki displayed an unusual long sword form (that’s a long straight sword, not a long form!) which most of us had never seen before while Barry and Emma showed us a variety of flowing partner work.

As usual, the gala was followed by a buffet in the studio with music and dancing fuelled by reasonably-priced beer and wine and what whisky there was left over from Friday night (plus a bottle that Barry had brought with him).

Ronnie, as usual, spent most of the afternoons with various teachers, recording them demonstrating and explaining various aspects of their work. These will be available on the Taiji Forum websites in due course.

Here are 2 links to links to Ronnie’s Flickr sites of the 15th meeting: