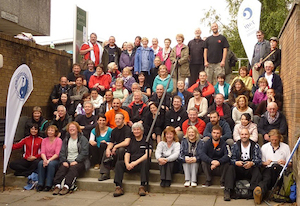 Since the early 1980s tai chi players from across the length and breath of Europe have been getting together to exchange skills and learn more in a spirit of openness and sharing. Since one of the earliest tai chi events, Recontres Jasnieres, (staged by Serge Dreyer and his ARAMIS group in the Loire Valley, France, since 1987), these multi-style gatherings have helped to sow the seeds for growth and development across all styles and approaches to these internal arts.

Now we have a wide range of regular annual tai chi events held in many European countries: Scotland (Tai Chi Caledonia), Germany (Push Hands Meeting), Holland (North Sea Tai Chi), Prague (Push Hands Meeting) and Italy (AquaVenice). In addition to improving the skills of those who attend these tai chi events they have also created a network of practitioners from many areas of Europe who meet regularly in a spirit of friendship.

Although tai chi has very rewarding solo aspects like hand and weapon forms there are many who would agree that working with fellow players training activities such as tui shui (push hands) san shou (applications) can bring your tai chi to a higher level. Whilst it is educational to work with fellow students from your regular class, working with those who have differing training systems, from other schools, other traditions and other countries can really help to stretch you further.

Over the course of these reviews pages we offer a selection of articles, written by non-partisan practitioners who have felt inspired to put their thoughts forward for the interest and benefit of others.

If you’ve never competed in a tai chi tournament and are unsure about what happens check out our reports from the Taijiquan and Qigong Federation for Europe’s bi-annual competitions that have been staged in a number of European countries including France, Italy, Russia, UK, Netherlands, Sweden and Denmark.

We welcome your contributions and comments on these pages and, with your input, we can help to inform and encourage more European practitioners to beyond their regular weekly classes and help to improve the skills of everyone.

From April, 19th to April, 21st 2017 I have been a guest teacher for a three-day workshop at the 17th International Push Hands Meeting in Hannover. Concerning the participation at this event I want first of all to cordially thank Mrs. Huang Tsui-Chuan who has been running her own Tai Chi School “Shan Shui” in the Freiburg area for more than 20 years and has invited me since 2012 every year to Germany to hold a Tai Chi seminar…

This summer I had the pleasure of attending the 14th annual Tai Chi Caledonia 2009. The event took place from the 3rd – 10th July 2009 and was hosted in the beautiful setting of the university campus in Stirling. Being a Caledonia ‘virgin’ and having never even visited Scotland before I had no idea what to expect. On the 7 hour train journey up to Stirling from the south coast of England I was extremely excited and kept rereading the program and trying to finally decide which workshops I was going to attend…

I’ve been involved with the Taijiquan & Qigong Federation for Europe (TCFE) since 1997, when I went to teach at their 2nd Congress/Forum in Hungary, which was organised by Dan Docherty.  Since that time I’ve been fortunate to meet and work with teachers and students from many areas of Europe, many of whom have gone on to become good friends…

13 years is a considerable time and many changes can take place over such a period and, despite any superstitious associations to the number, the 13th Push Hands Meeting was no less successful than any of the preceding events…

An incredible event in its 18th year, Tai Chi Caledonia has certainly stood the test of time with its tried and tested formula, with its great team scouting out up-and-coming and well established teachers, bringing them all together to create a harmonious and positive learning environment. As we all know, the long rocky road of tai chi training goes on and on, with its ups and downs; Tai Chi Caledonia is definitely one of the ups…

There was a time when there were very few tai chi practitioners training in Europe and the opportunities for meeting, working, and sharing skills with fellow players was almost non-existent. Today there are Internal Arts gatherings in most European countries (Push Hands Meetings: Germany, Czech Republic, Italy, Multi-Style Gatherings…

The International Push Hands Meeting staged in Hannover, Germany is a firmly fixed schedule in the minds of most northern European players, who like to exchange with others, in the often varied art of tai chi tui shou, or push hands as it’s better known to most. Taking place annually, and now in its 14th year, it provides the first opportunity of the year to meet friends, old and new, from various Europan locales…

The Yin and Yang of Aquavenice