13 years is a considerable time and many changes can take place over such a period and, despite any superstitious associations to the number, the 13th Push Hands Meeting was no less successful than any of the preceding events. 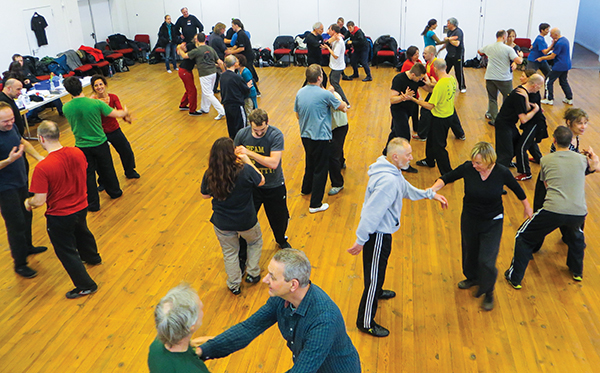 Organised by Nils Klug, a close student of William CC Chen, the gathering has been instrumental in garnering an open approach to the art of push hands (tui shou), freely showcasing teachers from a variety of styles and approaches whilst encouraging students of all levels to work together in a spirit of sharing and openness.

The Beginning of the International Push Hands Meeting Hannover

When I attended the inaugural event I arrived at the venue bang on 10:00am (following a considerable journey from my native Scotland) and was ushered into the smaller studio where I was to work with three students for three hours. During this early meeting I became aware that much of the push-hands education around northern Germany centred on the concept of yielding and accepting force, which can be very helpful and creative, but in order to have a balanced, realistic approach one should also be concerned with returning force.

As before, Nils carefully selected instructors with differing approaches to the work of push hands, but on the first day he was suddenly hit with the problem that two of his three teachers were not going to make it. Paul Silfverstrale’s son was unwell but fortunately he made it a day later and Jan Bloem sent a more than capable replacement in the form of Michael van der Woude, also from the Netherlands. The third teacher was yours truly. So the first sessions of the event meant that we both had considerable numbers of students. I’m not sure how Michael’s sessions went but I had no apparent complaints so I’m guessing nobody was overly concerned about Paul’s absence on day one. This, for me, is a testament to the student’s openness and willingness to consider differing approaches and aspects to our work.

Having attended the Push Hands Meeting on 11 previous occasions, the majority of which in a teaching capacity, I decided to offer sessions on “Re-affirming Principles,” exploring themes such as sensitivity, structure, good stance, rooting, listening, neutralization and energy projection. Whilst most of us approach the work of push hands with good intentions often the basic principles disappear when we’re under pressure. In dealing with the central theme of ‘Taiji’ I encouraged them to really consider the changes from yin to yang and vice-versa on a deep experiential level. This of course requires time and sensitivity and often the ability to let go and, from time to time, ‘invest in losing.’ The students were more than willing to experiment with the various themes presented and seemed to have benefitted from the time we spent together.

After lunch in a local Italian restaurant we returned to the Kunsthalle for the customary 3 hours free-interchange. Again there was a diverse range of styles and experience on hand and everyone seemed to find what they wanted/needed in terms of pushing. From the almost still, sensitive exploration to the lively moving-step play the room was buzzing with highly enjoyable pushing dialogues between the international group of attendees from Germany, Czech Republic, UK, Netherlands, Italy, France and Austria.

On the 2nd day we again assembled in Nil’s lovely training studio where the teachers of the day were introduced. I continued with my theme of yesterday (Following leading the early morning qigong session which I, for the first time, started 15 minutes earlier than I ought to have, much to the consternation of one or two latecomers, who were even later than they anticipated.) Dieter Mayer, who would be teaching the latter part of the week, aided me. His smooth and effective translations enabled a closer connection to the students, which resulted in a clearer transmission of the concepts we were dealing with. We all greatly benefitted from his assistance.

Paul Silfverstrale, who had arrived late Wednesday was offering Chin Na, Throws and Punching as themes and had a more than considerable interest, judging from the volume of students. Michael worked with Systema, centering on the water-flow concept which he did with an equal measure of serious efficiency and light-hearted humour, with more that a hint of a character from Trainspotting.

As my morning session was half-way through a couple of familiar faces appeared at the door of the studio, Gianfranco Pace and Margherita Padalino from Sicily, whom I had visited a couple of months earlier and written a report of his school and his custom-built centre where he taught the full tai chi curriculum to students of all ages. As we were on a break I was able to offer them a drink and get them settled in a warm room with a copy of the tai chi magazine containing the feature.

In the afternoon I began shooting some film, looking at the many ways in which tai chi could be effectively applied as a realistic martial art. The instructors were more than happy to offer their services for this project and soon I had a number of techniques on film. 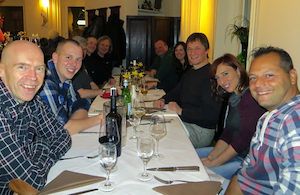 That evening Nil’s reserved places at his favourite Italian restaurant that allowed the teachers to relax over fine food and wine, some of which were partaken a little fuller than others. (No names, no pack-drill). It’s nice to have time to relax with fellow teachers and much can result from these meetings that have the potential to impact on the greater tai chi community. The exchange of ideas is not necessarily restricted to the ‘hands-on’ inter-changes.

As the weekend grew closer the numbers increased accordingly and the increased choice of four teachers was fully justified. Again Michael and Paul continued on the same themes added to by Dieter Mayer looking at the role of the Five Elements in push hands whilst Gianfranco offered “Basic Pushing Hands to Unbalancing, Yanking and Projection.”

As I had some business to attend to in town with Nils I also took the opportunity, on Nil’s recommendation, of visiting his local Thai Massage Centre, where I enjoyed a stretching 45 minute session on my back and then a slow, relaxing walk back to the studio in time for lunch. (I greatly enjoyed seeing some fascinating old buildings on Beethoven Strasse where, it turned out Nils had attended school).

The evening saw nearly 40 of us gathered together in one of the many local bars where they serve excellent food, of substantial quantity at more than reasonable prices. For me, and I guess for many others, it’s one of the joys of visiting Hannover that there is a great variety of good eateries where you can slip off with a few close friends, or a larger group, depending on how you feel and have a really pleasant time over great food.

After some time spent socialising I retired to the trusted Hotel Mayer with my fellow countryman, the appropriately named Al Scott, where we did what Scottish people must do at a certain point of the evening. I vaguely recall being accompanied by a certain Swede…

8:45 and once more unto the breach where I delivered my final contractual obligation in the form of the last early morning qigong session, still with reasonable numbers despite the evening’s imbibing.

At 10:00 the teachers of the day were introduced as Gianfranco Pace was joined by local Chen Maestro, Nabil Ranné, Dieter Mayer and long-term UK colleague Gary Wragg: Founder Member and past Chairman of the Tai Chi Union for Great Britain, and European Representative for Wu’s Tai Chi Chuan Academy. Once again a stimulating variety of topics with Footwork, Stepping and Hitting Techniques (Nabil) and Wu Style Push Hands Methods being added to the topics of the previous days with Gianfranco and Dieter.

After a light lunch at the delightful (and quick) Vietnamese Restaurant I enjoyed a short siesta before participating in the afternoon’s free-pushing sessions.

Having attended the event since its early days I have seen a distinct education take place over the years. Where often ‘pushers’ were predominantly ‘yielders,’  now we increasingly experience players with the ability to ‘dig in’, get grounded and return the pushes some more. That being said, as in every push-hands meet there are still those who could benefit by a little more yielding whilst simultaneously returning the on-coming energies.

The Gala of the Push Hands Meeting

The culmination of the event is the Gala night where we can see an array of skills performed, in the main, by the visiting instructors in a professionally lit area to the live accompaniment of discreet classical guitar.

The demonstrations kicked off with a reasonable performance of Chen Style Tai Chi Hand Form by a Chinese gentleman whose name escapes me. Gary Wragg performed an exemplary Wu Style Hand From and then Nabil showed us a controlled yet dynamically explosive Chen Hand Form with powerful Fajing techniques. Paul Silfverstrale unusually decided to provide a rare display of neigong where his student jumped from a step-ladder directly on to his stomach. Despite an initial mis-landing which looked like he arrived on Paul’s arm, rather than stomach, the second attempt worked and Paul was clearly none the worse for wear after the display. 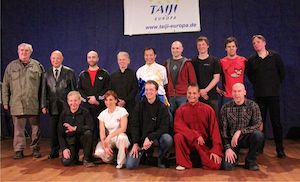 The visiting ‘Chinese Master’ talked for some time, I guess about the benefits of tai chi and qigong (sorry the but Wang Ning was busy enough translating from Chinese to German that meant no English commentary was available) prior to performing some push hands techniques against a seemingly compliant accomplice of more than considerable size.  The ‘Master’ encouraged his ‘stooge’ to grasp his fingers with two hands whilst he guided him one side or the other using what appeared to be little force.

Last, and most certainly not least, were my good fiends from Sicily who, in my humble opinion, were simply exquisite. Gianfranco performed Chen Style Hand Form effortlessly, Margherita dazzled with her double-sabre routine and Gianfranco went on the display an acute sense of timing, subtlety and awareness bringing Margherita to her knees on a number of occasions, softly and gently in a clearly connected manner which obviously discerned exactly when and where her weaknesses were.

In some ways these demonstrations shows the considerable growth in tai chi in western terms. Whilst many of us who are advancing in years had experienced some difficulties in finding high quality ‘authentic’ tai chi education in our early education, it is very clear that high quality material is easier to find and worth investing time and energy in.

The Push Hands Meeting has made a considerable contribution to the Push Hands education in Northern Europe and through the healthy, open exchange encouraged by Nils we will continue to learn, not only from eminent ‘Master’s but also from each other and… ultimately from ourselves.