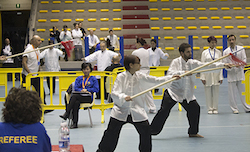 I’ve been involved with the Taijiquan & Qigong Federation for Europe (TCFE) since 1997, when I went to teach at their 2nd Congress/Forum in Hungary, which was organised by Dan Docherty.  Since that time I’ve been fortunate to meet and work with teachers and students from many areas of Europe, many of whom have gone on to become good friends.
European Interchange

My work with these various individuals has also allowed me to create projects (European Internal Arts Journal (now defunct) and Taiji Europa) which continues the theme of sharing, learning and developing healthy dialogue between practitioners from a variety of styles and approaches to these multi-faceted arts.

In August 2011 I participated in the TCFE Forum in Lignano, Italy, which was ably organised by Severino Maestrello and his team. Despite difficult economic times and the increasing plethora of internal arts gatherings the event was highly successful and greatly enjoyed by all who attended. Severino went on to offer his services once again to organise the TCFE Competition. His bid was carefully considered, discussions took place, guidelines were submitted by the TCFE and the wheels started to turn….

Throughout the process I had regular communication with Severino where we continually refined, adapted and changed little things here and there, mainly to allow visitors to understand the process of registering online, arranging accommodation, timings for flights etc. 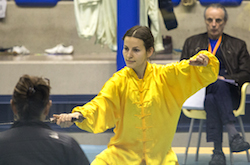 Then we had to look for judges. Severino would arrange a balance of Italian judges and I would locate 15 competent judges from elsewhere in Europe. My initial approach was to contact all membership organisations of the TCFE requesting competent judges from the various countries involved. A few came forward but nothing like enough. I then considered who among my long list of contacts across Europe would be capable, unbiased and available to give up a weekend to aid the European Internal Arts Community.

Close to hand in the UK Gary Wragg and Faye Yip, immediately came to mind as long-standing members of the Technical Panel of the Tai Chi Union for Great Britain (TCUGB), and founding members of the UK Judges’ Training Courses, which had been running for the past 5 years or so. They agreed to do the job and also put forward others who had successfully completed the five-year Judges’ Training Courses (Merilee Pearls,) along with three individuals who regularly judged at the long-standing British Open Tai Chi Championships (Charlie Gorrie, Kathy Davies and Diane Pullen). Holland offered two highly experienced judges (Ceciel Kroes (Now also on the TCFE Board) and Cora van Geel, members of the TCFE Executive Committee, Cornelia Gruber (Switzerland), Hans Finne (Norway) who had judged at nearly all the previous TCFE Competitions. Key judges from other European countries (including Germany and Italy) were also on the list but unfortunately were unable to attend.

The job of locating sufficient, unbiased judges to consider what is a European level event is no easy task. However with the increasing number of competitions and judges’ training programmes the pool of judges is slowly growing.

The next task was to familiarise the organiser and judges with the rules and establish clarity, particularly looking for any uncertainties that can result from having to read something in a non-native language.

Two days prior to departure I received an SMS from KLM advising me to go a day early, as flights were likely to be cancelled on Friday. Finishing my class around 19:30, travelling to my nearest student’s house (well done Aileen) to get online, and on the telephone (for some considerable time) I finally arranged a new flight for 9:00 the next morning. A quick dash home, pack everything in bags and back to Aileen’s to stay the night as she’s closer to the airport and successfully on the (late) plane en route….

Severino, despite his busy schedule (an understatement), made the one hour drive from his home in Padova to Venice to collect me at the airport and then back again, to the local railway station where we met the TCFE President, Nils Klug, checked into the hotel, and reconvened at 20:30 for dinner. During dinner we met his key team members, Paulo, Walter and others then proceeded to assign the various judges to their respective tables, ensuring a balance of styles and countries where possible. 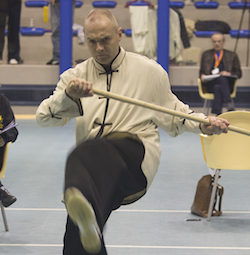 The next day we arrived at the venue mid-afternoon where I met other members of the TCFE Executive Committee including Paul Silfverstrale. Paul was responsible for running the very successful 4th TCFE Competition in his native Sweden 4 years ago and had been providing valuable information to Severino for this event. (Some time over the ensuing years between both competitions Paul had worked, in conjunction with a TCFE Sub-Committee to establish a template for all subsequent organisers of TCFE Competitions (A similar template also exists for the TCFE Congress/Forums)). We had arranged for Severino’s team, Paul and I to go over the rules etc. prior to a meeting with the judges later that night.

From 17:00 until dinner the TCFE Executive Committee began their meeting 30 minutes early, as our time together would be limited due to our various duties over the course of the weekend. Around 17:30 our Treasurer arrived and we continued our meeting until 19:30 when Paul and I had to attend the judges meeting.

Because of these time limitations the TCFE EC agreed to arrange follow-up meetings via Skype over the next few weeks. The meeting also raised a number of key issues that will also be addressed over the same period.

After dinner Paul and I met again with Severino and his team to go over the rules once more, prior to the judges’ meeting. A number of things were clarified and later related to the judges. Their meeting took some considerable time, down to translations and clarification of various points in the rules.

9:00 Saturday morning everyone assembled in the large, airy stadium, which was divided, into six arenas for the major event. Severino decided to do all the form events on Saturday, leaving all the push-hands meetings until Sunday.  This decision allowed competitor to be well prepared and presented for form events and negated the need to change clothing in between times. It did however make the day calmer and quieter, lacking the usual enthusiastic shouts of encouragement that we have come to associate with such events.

It is clear from attending these competitions that an increasing number of competitors take their training regime very serious and the results show in the increased standard of performances. Some categories we well subscribed to whilst others were not but with 320 competitors enlisting to compete over 700+ entries an interesting and diverse range of skills were seen by all.

The volume of entries was no more evident that on the Saturday evening when the various medals were presented to the successful entrants. In addition to various committee members of the TCFE, the medals presentations included Severino, the President of his Association, and an official of the region. This, as you will imagine, took a considerable amount of time and by the time it was over some of us were just a little too weary to enjoy the party that followed. However the following day the push hands medals were presented shortly after the winners were established, negating the requirement of spending another 2-3 hours with the awarding formalities. 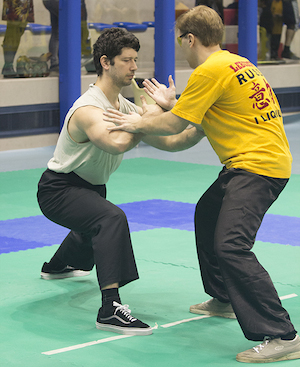 Sunday morning a short meeting covered the rudiments of the scoring procedures and the matches got underway. With one referee, a timekeeper and seconder they were kept busy looking for potential infringements or unfair play. Although the competitors were in good spirits, playing fairly, some tension ensued when one or two enthusiastic supporters got overly passionate in their support, occasionally berating the referee for some (in their eyes) perceived omission of penalties or points.

What was clear was the fact that no matter how efficient the referees were; it was difficult, if not impossible to see everything in the heat of the moment. What was equally clear was if anything did get missed there was an equal impact on each contestant with no bias being showed by any judge. When there were questions every judge was able to clearly justify his or her marking and their attention to detail and fairness was evident when they answered any questions openly in a friendly, helpful manner.

Over the course of the weekend there were three official appeals made to the Appeal’s Committee (which consisted of three members of different styles, from differing countries) one of which was upheld and the other two amicably resolved taking into consideration the contributing factors. 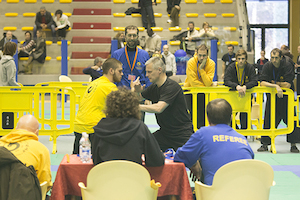 Organising such an event is a considerable task. Bearing in mind that anyone who does so, does it only once. Doing anything for the first time invokes a large learning curve and to do so at a time when there is much on stake for everyone concerned requires clear organisation, calm mind and the ability to adapt to the circumstances. These are also qualities that we train through the work of our respective arts. Every time there is a competition lessons are noted, learned and incorporated into the running of future events. The TCFE will analyse all comments, go over every aspect of the event, and consolidate all points made, from every angle. They will then improve and adapt our guidelines where necessary to create a clear workable template for future events.

Enormous thanks must be given to Severino Maestrello and his team for their tremendous efforts, clear organisation, and friendly, open spirits that ensured the event was thoroughly enjoyed by all.

To the judges who gave freely of their time, many travelling considerable distances, who exercised fairness and impartiality, without which there would be no European champions.

And finally to the competitors, who gave of their energy, time and money to train, develop and compete in good spirits.

The European Tai Chi Community is growing and developing and through continued open exchange like that which occurred over the weekend of 7-9 December we can all benefit from the work of each other and our community will continue to flourish.

Please send your pictures, videos and comments and we will share them via our websitesand Facebook pages.