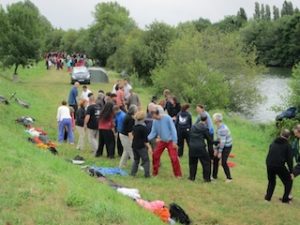 Every summer for the last thirty years there has been a tai chi get-together near Le Mans in Northern France. For this anniversary year the organisers arranged some special events, but on the whole the meeting has not changed since it began in 1987. The Rencontres Jasnieres (RJ) is organised by local tai chi association ARAMIS (Association de Recherche en Arts Martiaux Internes en Sarthe) which was founded in 1980 by Serge Dreyer. Serge, along with a committee of tai chi enthusiasts, brings tai chi practitioners from around the world together every year on the last weekend of July.

The process of selection of instructors is unusual in that they are not solicited, but must apply to the committee with details of the workshop they wish to hold. Successful applicants will usually be invited to teach for two years running if they so wish. The system has proved to be a great opportunity for those who are not well known internationally, as well as for participants to train with a variety of teachers. This year the committee deliberately tried to choose popular teachers from past years, some of whom had been present for the very first meeting.

RJ takes place on the shores of Lac de Varennes in the village of Marçon, noted wine producing country, and the meeting always includes a wine tasting session. Participants generally stay at the campsite wherein the meeting is held, although there are many bed and breakfast options as well as other campsites nearby. Being on site has always been convenient and given people the chance to socialise, but a change of campsite management a few years ago has made this a slightly less attractive option. This year several participants complained of administrative problems and a lack of friendliness. In addition, a longer route has to be taken now between the site and the location of the workshops and push hands sessions, as the connecting gate is kept locked. 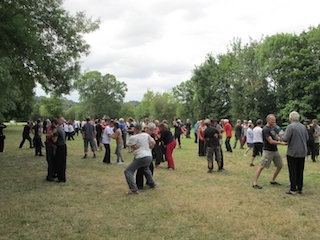 The campsite boasts three stars, although non-French visitors may be a little surprised to find mixed washing facilities with no toilet seats or paper. There is a small shop on site and a restaurant, but you can also take lunch and dinner in the RJ “canteen” in the village, traditional French food from chef Jean-Marie Barbotin, long time RJ caterer. (Note, there are usually vegetables but no real vegetarian options.) If you wish to partake, you need to book and pay for meals by the end of June.

The village is also the scene of an annual marché gourmand nocturne (gourmet night market) which coincides with the meeting, being held on the last Saturday evening in July. At 10pm or thereabouts, the RJ disco commences in the hall where meals are taken. There are always talented musicians amongst the participants, and this year’s players included crowd pleasers Bob Lowey & the Bobettes as well as Dan Hengst with his didgeridoo. 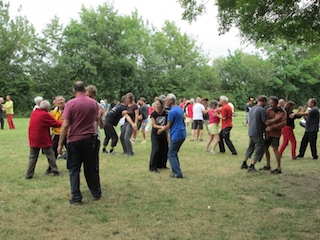 Numbers this year were around two hundred and fifty, less than in the meeting’s heyday, but a good showing, with participants from the Netherlands, England, Germany and Spain as well as all corners of France. Teachers too came from far and wide, including American Peter Ralston and Scots Dan Docherty. There were nineteen morning workshops divided into two sessions, with push hands, form, qi gong, weapons and other disciplines. Each session lasts for an hour and forty five minutes so it is possible to do over five hours work with each of two instructors, or try up to six different ones, according to preference. The first session starts at 7.45am.

RJ normally takes place over three days: Friday, Saturday and Sunday, but this time it was extended for an extra day to mark the anniversary. The extra sessions were filled with festive workshops which were well received on the whole. Many people joined in with one of the three groups creating tao or yin yang art designs, musical improvisation and tai chi themed theatre. Others used the time to take a nap, sightsee or practise.

Since 2016 the organisers’ tent in the camp ground has been replaced by a handsome wooden building within the public area of the lake. Tasting of a selection of Chinese teas was offered here before the afternoon sessions, as well as the chance to play some Chinese themed board games with Cornelia Gruber. As usual t-shirts and other RJ themed products were for sale as well as the RJ dual-language (French and English) book, produced in honour of the anniversary. The book summarises the results of a survey of past participants and includes some photos going back to the early years. It is available to buy through the ARAMIS website. 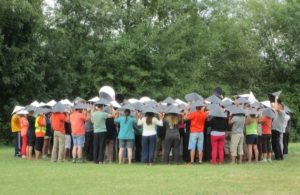 Apart from Saturday’s festive workshop performance, afternoons kept to the standard pattern of demonstrations followed by open push hands, with Serge Dreyer tutoring the less experienced. The alternative of qi gong tui na massage with Katy Hamlett was also on offer. The push hands sessions have always been an important part of the meeting, allowing people to practice techniques learned in the workshops, and push with all manner of partners. Most of the instructors join in and are very generous and enthusiastic about sharing their knowledge. In fact, many of the RJ participants are teachers or highly skilled practitioners themselves and it is a rare and precious opportunity for people to come together.

With work and other commitments folk start leaving at lunchtime on the Sunday, but the push hands session was nevertheless well attended. At 5pm those remaining were asked to form a human yin yang symbol which was filmed by a radio-controlled drone. Each person took a black or white cardboard hat and stood in formation, then reversed the hat on command. The film, which will include footage and interviews from throughout the meeting, is to be posted on YouTube. Next was a raffle for the cups and teapot from the tea tasting. Lucky Laura Stone staggered away with the enormous pot.

In accordance with tradition, the teachers, committee and volunteer translators were thanked, announcements of other meetings made and the 30th Rencontres Jasniere finished with a group laugh. Let’s hope it will continue for at least another thirty years.

On the Bangkok Push Hands Facebook site you’ ll find 27 images the author made during the meeting.