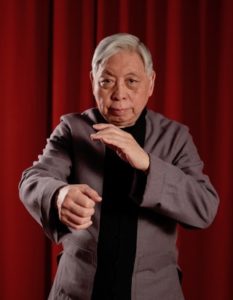 , literally meaning “Grand Ultimate Fist,” is one of the most sophisticated Chinese fighting arts. It is a masterpiece of neurophysiology as the brain connects with the fighting devices of the fingers and the toes for punches and kicks. The desire force of Yi毅(力) in the brain amplifies the energy cell of Qi氣 by passing through the acupuncture channel “Spleen 21” to animate fingers and toes into an action. The interrelationship of these invisible elements – the brain Yi developing the Qi in the fingers and toes to create the desired moves – is the result of the slow movements.

“Spleen 21” are major Chinese acupuncture points named Dabao (大包-the great embracement) and are located on both sides of the mid-auxiliary-line in the 6th intercostals space below the armpits. They are the foremost processing centers for any intentions in the brain that travel through the spinal cord into “Spleen 21”. These signals are then transmitted via the meridian channels to be executed by the fingers and toes for the desired action or actions. Without those centers, the desired action will not be able to be delivered. I have been calling them “feeling command centers” for decades. They act like ‘middle men’, transferring our desires into movement, which is the essential points in the action of fighting.

“Baihui” 百會- the hundred gatherings, which is a place to receive information and processing

The awareness center of brain is located on the top of the back head in Chinese medical chart named “Baihui” (百會- the hundred gatherings, which is a place to receive information and processing.) and the western’s indication is an “Antenna”. Uplifting the alertness in the brain from spinal cord without muscle tension (虛靈頂勁) in the movements is elevating the feeling of Yi to animate the Qi in the fingers and toes into a desire action. At same time, it raises the oxygen and blood in the brain cells to keep them healthy and to perfect their functioning.

These are the objective of martial artists to have the ability of quick central nervous system reactions. Their punches and kicks are undertaken directly by the brain awareness. When this awareness awakens, action is delivered by the remote nervous system components of fingers and toes. Synchronizing the awareness of the brain, fingers and toes is the central purpose of this Tai Chi Chuan practice.

The slow-motion of Tai Chi Chuan

The slow-motion of Tai Chi Chuan practice is like Bluetooth, pairing the connection of the fingers and the toes with the control center of the nervous system. Once it’s paired, the practitioner’s brain, fingers and toes work as an inseparable unit: any emotion and intention in the conscious brain is instantly transmitted into the physical action of the fingers and toes without any delay. This is of utmost importance for martial artists when they are engaged in fighting.

The quick transmission of a neuro-reflex into physical action is essential for the martial artist, with the implication that he or she can deliver the punches and kicks within a split second. It is like the specialized ability of the courtroom stenographer, whose fingers type as people speak. This neural and physical connection is a necessary function of all human beings, which enables them to accomplish our daily activities more effectively and quickly, whether we work at home or have a job in an office.

In today’s rapidly changing world, left hemisphere brain functioning is no longer enough. Today’s invention is tomorrow’s history, and by the day after tomorrow, it’s ancient history. The work of future Tai Chi Chuan players will require creative and intuitive thinking as well as physical action. Any successful individual can and must learn how to use a fully functional brain integrated with the power of emotional and physical cooperation.

For the past 60’s of my teaching, learning and sharing this slow motion of the movements, I began with body mechanics principles, then moved into bio-mechanics and now I am involved with neurophysiology. The connections of the three elements of brain, fingers and toes are crucial to our daily activities. It is like the computer that requires the software of human a brilliant mind to enhance the system. The system must be updated monthly, weekly even daily. The bus is not going to stop here, the learning and perfecting is never ending, which is similar to our computer’s software being updated every so often.

These unhurried and relaxed movements help to regulate the nervous system, lubricate the joints and eliminate stiff muscle contractions. They facilitate full cooperation with brain function, circumventing physical interference from the muscles. This enables our fingers and toes to reach the highest level in the work of art.

For health, the soft movements of the practice ease body tension, promote the flow of vital energy Qi and replaces muscle rigidity with flexibility and excellent body coordination. They boost one’s mental tranquility, improve physical fitness, increase blood circulation to its full capacity, and provide the tissues of the various organs with the maximum amount of oxygen.

This silent meditative moving of Tai Chi Chuan is one the great contributions to humanity’s well-being (太極拳帶給人類最佳的貢獻).

The following pictures are the brain lifting weight and the Tai chi postures. All the movements are the reflection of the intention in the brain.