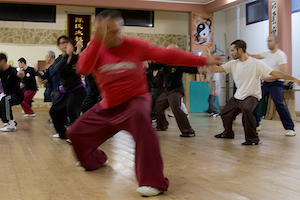 Taijiquan has, since its inception, been regarded as one of the Chinese ‘Internal’ Martial Arts, an often debated term, with many interpretations. Whatever the case it is generally agreed that in the execution of the art in martial application, something other than mere muscular power is exerted.
In developing internal energy the body must be relaxed and fluid, moving from the inside out, and the mind must be focussed, calm and intentful.

In this short film clip Gianfranco Pace of the International Taijiquan Kungfu Association, based in Sicily, illustrates the transition from smooth, fluid qigong movements to the dynamic, explosive power of fajing.