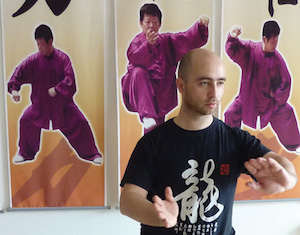 Motion control and power development play an important role in the practice of Taijiquan. On the basis of classical Chinese texts I will explain how the concept of strength in Taijiquan is traditionally being understood. Some Chinese terms will be explained in order to gain a deeper insight into the basics of Chinese martial arts theory. Subsequently these terms concerning strength will be applied to the required structure and body mechanics. Finally we will discuss how movements in Taijiquan go along with intentional control and the breathing, as these lie at the bottom of power generation and should in the long run be integrated into practice. Thus meditative effects will also benefit from this practice.

For every person learning a martial art the acquisition of strong and explosive movements is quintessential. To prevent an opponent’s force from hitting and restricting your own body and to apply techniques properly you must necessarily deal with your own power and motion control. The classic advice of many masters is to first look into your own mode of power generation through solo exercises like standing, basics and form, before you deal with opposing forces. Once your own movement space has been properly developed your body can move in a more flexible way and with less internal friction.

Looking at some of the terms in Chinese martial art theory with the meaning of “strength” it becomes clear that there is no uniform definition as the theories developed over many centuries. Rather, the used concepts should be understood in their respective contexts and as everyday language. Just like the English words for “strength, power” the Chinese terms can be found in different contexts and with different meanings. Generally speaking we find the two following terms meaning “strength”:

Though there are many papers on these terms, both in principle just mean “strength”. My teacher Chen Yu points out that “li” rather means a motion potential. Jin, however, rather means a direction of movement: “Li could be described as general strength or power, while Jin is a guided energy, i.e. an energy that has been channeled into a certain direction.” (Chen Yu in Stubenbaum, 2004, p. 12). That these terms are not really clear-cut shows in the subsequent citations. The “Treatise on Taijiquan” (Taijiquan lun) by Wang Zongyue, which is considered a fundamental text shared by all Taijiquan practitioners, says: “Once you get into contact [for example in combat application, comment by the editor], you can gradually understand strength (jin). If you understand it, you can ascend to divine clarity. But this cannot be done without sincere effort. Elsewhere the treatise says: “Once you understood the strength (jin), more practice means more finesse. “2 . Wu Yuxiang (ca. 1812-1880), founder of the “old” Wu-style in the 19th Century, also wrote several important works on the theory of Taijiquan. Much in the same way he pointed out the central role of the concept of strength. However, he also used the term “li”: “Strength (li) is being sent out via the spine”.3 Both terms thus describe certain power paths which can be applied in combat applications and which have to be properly trained. Therefore there is no strict separation of the two concepts of “li” and “jin”. However, for the sake of clarity we will in the following nevertheless understand “li” as a strength potential and “jin” as directed force. 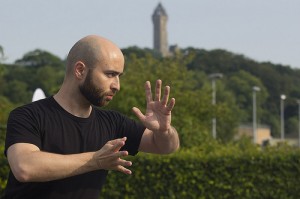 Both are not to be confused with the so-called “clumsy power” – Zhuoli (see Chen Weiming, Davis, 2004, p.125), which rather describes body movements that obstruct one another. For example, if the forearm presses forward, but the upper arm is too weak and simultaneously squeezes back into the shoulder so that this movement virtually thwarts the overall pressing action. In partner training movements like this are also referred to as “resisting force” (kangli) as they can be perceived as a direct conflict and opposition of forces. Thus, although clumsy and resisting forces are to be avoided, this should in no way lead to a general weakness. As in the example just mentioned sometimes weak intersections of the body even result in clumsy force because it prevents a natural movement flow of all limbs.
Though comments to the classical writings from the 20th Century Taijiquan practitioners are advised to not use “clumsy force” nevertheless the overall achievement of “strength” is considered as one of the main objectives in Taijiquan – relaxation, contrary to today’s emphasis on it in Taijiquan practice, is hardly spoken of. Perhaps because it is a consequence of correct training and not merely an end in itself.

The fundamental energies of all Taijiquan styles, which we will later be briefly discussed, are all termed “jin” and describe different directions of movement dynamics. In the classical writings on Taijiquan there is no mention at all that no power or strength should be applied. That idea emerged in the 20th Century and should be read in its appropriate cultural context. Naturally the concept of strength in Taijiquan means a specific strength and it should meet certain criteria to enable a worthwhile Taijiquan training. To build up a basic body structure training postures in Taijiquan is crucial. The terms and li and jin are thus joined by third term, which might mean “force” or “strength” as well, but is usually being translated as “posture”: Shi 4 .

Yin and yang in balance 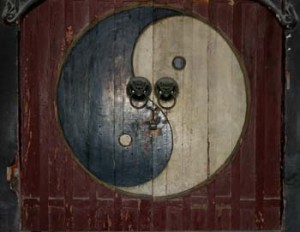 When you start with the Taijiquan training usually a body structure is established to enable an integrated coordination from the feet up to the hands. For lasting relaxation strength and an upright body posture are also essential! Thanks to precise body structuring in Taijiquan an important part of its health effects are achieved. There are several basic requirements most practitioners are certainly familiar with: first, the legs and knees are aligned over your feet in such a way that body weight is directed through the heel into the feet to the body to “root”. The knees are slightly bent in this case, but there should be no pressure on them. By positioning the knee correctly the crotch can be closed to the front and opened at the back, so that the upper body has a solid foundation. The Taijiquan positions (shi) are based on an understanding of internal movements which can also be found in traditional Chinese medicine and its meridians. According to the theory the “Governor Meridian” (dumai) has Yang characteristics whereas the front portion of the upper body and the “Conception Vessel” (renmai) has Yin aspects. In the legs this is the other way around and the front is Yang, the back however Yin. If one understands Yang as an ascending, stretching tendency, but Yin as falling, releasing and relaxing, then the meridians express the required basic structure quite clearly: power has to be in the front of the legs, but the weight has to descend at the back like sitting down. The back up to the head crest should be erect and the chest should be kept in so that the body is upright and relaxed at the same time. Now we have discussed the vertical axis. On the horizontal the back side is also to be extended and the front is slightly closed and the body leans very slightly forward. Thus this basic static structure already creates a balance of Yin and Yang. Relaxation in Taijiquan is mostly characterized by a falling tendeny. Although the Chinese term for relaxation is not really mentioned in the classical texts, we can find the sentence “qi sinks to dantian” – which Chen Yu often complements by stating that “qi sinks into dantian to relax”5. This portrays the frontal sinking and also implies that the deep breathing should be felt in the abdomen as a pleasant expansion. Holding the spine too loose or lifting the chest up too high both inhibit a healthy and comfortable breathing. Both should thus be avoided. This overall body structure should be further elaborated over time. To achieve a correct implementation of these ideas, practical instruction from a teacher is probably indispensable. Relaxation is also not to be understood as random but it has a clear function and even a clear movement direction – as it always goes down. Chen Changxing (1771 – 1853) describes in one of his classic texts: “the top, middle and bottom are held together by one energy, body, hands and feet should be connected like a rope…” 6 . If the body is too tense, it cannot sink to its heels, if it is too limp, however, it is not energized or activated and not held together by “one energy”. Once this basic body structure  can be achieved, the practitioner gets a feeling of inner space and of pleasant activity. This also trains the structural strength “li” as defined above. The strength which results from spreading your body the right way is referred to as Peng strength in Taijiquan – thus acting as the first of the fundamental forces of Taijiquan. This Peng strength lends the body stability. Let us now turn to motion control in Taijiquan, or jin, directed strength.

Peng in Taijiquan defines two different skills. Chen Yu distinguishes them as follows: “Peng is a form of power that divides into two aspects. For clarity, we can distinguish Peng li and Peng jin. Peng li is a structural force, the result of accumulated qi. […] Peng jin is the result of an action, for example, an upward movement, and it is one of the four fundamental and directed jin.” (Chen Yu in Stubenbaum, 2004, p. 15).
This quote clearly elaborates on the relation of structural power and motion control. The structural Peng li makes it harder for an opponent’s force to enter your body and only with Peng li the four fundamental forces (jin) of Taijiquan can be used properly. To my knowledge these are first mentioned in the “Song of Striking Hands” (dashou ge), which belongs to the classical writings of all Taijiquan styles:

“Warding off (peng), taking away (lu), squeezing (ji) and pressing (an) must be practiced diligently,
The upper and lower body should follow each other so that the opponent cannot enter,
Allow him to gain immense power and beat us
We use four ounces to divert 1,000 pounds,
Lead the enemy into emptiness, connect yourself with him and throw him out immediately,
adhere (zhan), connect (lian), stick (nian) and follow (sui), don’t lose this link and do not go against.” 7

The four forces of the first sentence are supplemented by four additional forces and thus today in all styles we find at least eight basic techniques. These are interpreted elsewhere and, depending on style and teacher, sometimes have different meanings, which is why I would like to not go into detail about specifics but rather explain overall implementation principles. In most styles the eight forces are complemented by more techniques anyway. Within the Taijiquan exercises it is important to train these “powers” (jin) so that the above-described basic structure coherently generates the respective strength. Each of these has different layers in Taijiquan, which can be differentiated: from a superficial technical one to body mechanics to full body-mind coordination. These are internalizations which are meant to build upon one another. You cannot just skip the technical side of the movements. This is the direct expression of the respective Jin.

is based in Berlin, Germany.

1 The article name is borrowed from Chen Yu’s frequent advice:

4  Marnix Wells translates this term usually with “dynamics” and points out that it is not to be interpreted as a purely static concept (cf. Wells, 2005).

7 This translation follows the old manual of the Chen family called Tangben, see Xu Zhen, 2006. Davis points out that this song exists in many different versions, probably because it was orally transmitted (2004, p. 150). See the shorter versions in English in Chen Xiaowang, 2008, and Wells, 2005