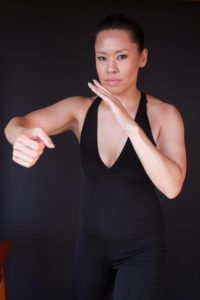 There is a commonly held misperception that tai chi chuan is primarily a soft, gentle exercise system that is not only suitable for the elderly but is actually only for older people. Whilst any serious practitioner is more than aware of the many aspects of the art it still remains strongly fixed in the public perception that old people are the ones who do it most. Tiffany Chen is part of the new breed of practitioners who is young, fit, extremely active and highly capable of effectively applying the martial aspects of tai chi.

Tiffany is the daughter of William C C Chen and has for some years successfully competed in tai chi tournaments in her native USA and Europe.
Ronnie Robinson

Can you give me an overview of the arts you practice and let me know which aspects are most important for you?

Currently, I study Yang style Tai Chi Chuan, Boxing and San Shou. What is most important to me about these arts is how I’ve been able to learn about myself. Each art helps you look at yourself from a different perspective. Each art has its own style and approach but in the end they all help make you a stronger person. What is most important to me in the process of learning is to find exceptional teachers and healthy learning environments.

How have your past experiences, figure skating, gymnastics, dancing etc. influenced your approach to Chinese martial arts? 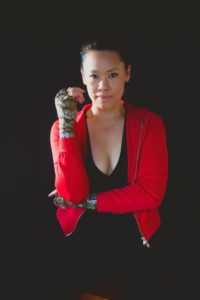 I don’t think any of what I had practiced before influenced my approach to Chinese martial arts. Each art is different, each teacher is different, I approach everything new I do as something new and individual and adapt to where I am. It isn’t until I get more involved with whichever art I am doing where I start to find similarities or ways of using my knowledge of different arts to complement each other.

It depends on what I am doing at the time. If I’m training for a fight, it’s really just common sense; you have to prepare yourself for what you are going to be doing. I spar more; I do more conditioning and cardio work. If I’m not gearing up for a fight and I’m teaching more I do less of what I just mentioned and I do the form and push hands more.


Tell me something about your work with companies, what do you do with business people, what are the aims and outcomes of the sessions 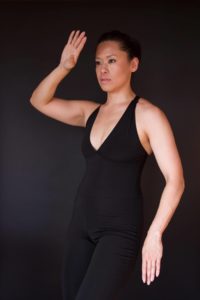 If I am giving lesson my approach is the same as it is my father’s school; a good deal of our clientele are business people. I don’t have the time to speak with people one on one when I am teaching at companies, I just go through the lesson and try to relate to the group I am dealing with. As far as the outcome, I hope they like what I give them, I do my best, and nobody has told me that they don’t like me yet. I have also done lectures here and there. I have always found that some people were really interested and there were some that weren’t. When you see that there are people disinterested you do try to broaden your approach to the topic and I do have to say that most times I have been successful. From all of this I have learned a great deal. I have learned that there are many different ways to approach teaching this art and you have to be flexible and open mind if you want to get your message across.

How much does cultural research play a part in your work, i.e. studying Taiji classics, Chinese philosophy etc.?

My Tai Chi practice at my father’s school is its own lesson in Chinese philosophy and Tai Chi classics. I am fortunate to have William CC Chen as my father. I hear his stories, listen to him in class and he lives his life by his teachings. The more I live life the more I actually start to believe that my father is the Super Buddha. I have met so many of his Tai Chi brothers and many of them have beautiful stories and are such honourable people. I have also met people that were despicable to my father when he first came to this country and because of his rise to fame and all those who respect him would try and befriend him after they tried to destroy him. My father never held a grudge and it wasn’t even my father who spoke of how these people try to hurt him. My father is always kind and respectful; I used to not understand it. How do you not want revenge on those who wanted to destroyed you As I watch my father, as I listen to him, I learn that I understand him differently, I understand his peaceful beautiful way of living life. I have always had a fire in me and it has taken years of making mistakes and learning from them. It has taken years of patience and guidance from both my parents to understand that my dad is the Super Buddha. I still understand him, but now I listen with much more care than before. I have had the Tai Chi classics and Chinese philosophy guiding me my whole life. It is only until recently that I have truly begun to understand its meaning and value.

How valuable do you feel it is to have had a Chinese heritage when practising these arts in the USA and beyond, do you feel it has given you an added advantage that perhaps westerners may not be aware of? 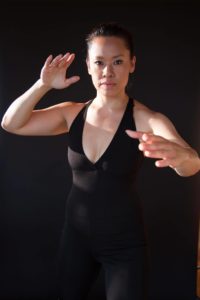 Today we have people from all different backgrounds studying and teaching Chinese arts. I find that it is most important to have a true understanding of whom you are and where you have come from before you can honestly learn and/or teach anything. I was also born and raised in New York City so I do see myself as a westerner though the Chinese culture and influences handed down to me by my mother and father form a large part of who I m and I’m very proud of that.

I really feel that the art of Tai Chi is a lesson in life. It is something that teaches you the true beauty of what we are all capable of having inside.  Perhaps a mistake that some westerners make is that they think it will help them find what it is they are missing in life.

I also think that there are some Tai Chi teachers who abuse the art of Tai Chi by making far-out promises of what you will be able to accomplish and extreme physical feats that they couldn’t even show you themselves. They prey on the innocence and hope of people that might either be a little lost or just looking for something “else”.