The interview with Faye Yip was led by Nils Klug in the context of a Workshop on Ba duan jin given by Faye in the Tai Chi Studio, Hannover, in Summer 2016.

Faye’s father and the competition landscape in Tai Chi

We may have an extra interview on your father, but maybe a few words about who your father is? 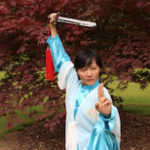 His name is Li Deyin. I think he played a key role in recent developments, in the history of developments in Tai Chi, in the journey as a whole in China, because he made a key contribution to the international competition scene if you like. The 42 routine was the compulsory international competition routine for many years and this is the official routine recognized by the Chinese Olympics Committee – and Wushu is under there. So he was working as a key member on promoting Tai Chi as a recognized competition platform. This, if you look at the development of Tai Chi in the world, is a crucial step to enable everybody to have this unified style and form to compare fairly and not each school saying: “I am the only one, I am the best and you cannot judge.” With creating a universally agreed format and creating that platform I think my father made a key contribution along with others as well. But one of the main things: if you look at history, I mean in hindsight, there were crucial moments, he played a key role. 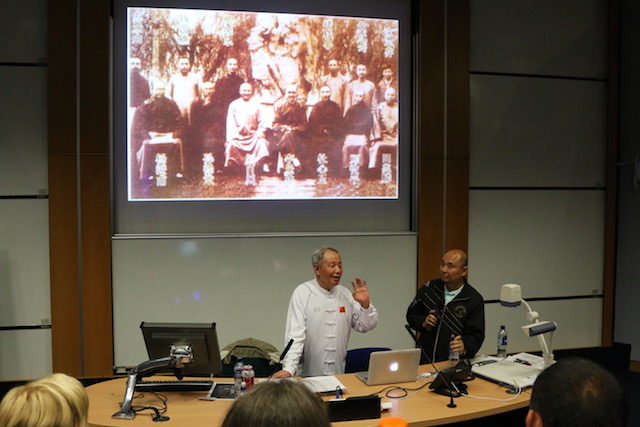 This is another big subject to talk about: competitions. But I remember, when we were were having diner, the day before yesterday, and we talked a little about competitions and the problem that there are so many world championships, so many different rules, changing all the time and how every country should have a big one and then there should be every one or two years a real world championship and it would probably help to have the same rules and so on. – But it looks like this is going to be a long long journey – at least another ten years I guess.

I think so, yes. Absolutely, I think that it is different organizers. I think they do not always agree within one system and that is why the rules can change, when the organizer decides basically. So if you have the organizers all belonging to an umbrella organization like the Olympics then everything is standard. We do not have the same argument about gymnastics for example or Track and Field, it is a very clear set of rules. But Wushu at this moment and Tai Chi as well has not quite reached to this stage. Basically, what we have, is the situation that whoever organizes the competition has the ultimate say in deciding how the competition is going to run and they can also give a name to the competition. At any international stage, also when you only have three countries participating, you can call it “global”, “universal” – you can call it anything you like, they have the ultimate say. This is the challenge one is facing when promoting Tai Chi to some kind of standard.

But the question is: What does it mean after all? I really believe a lot of work needs to be done and hopefully there are people who really start doing it.

It is worldwide and it is very hard especially in Tai Chi. Taijiquan, it’s very difficult, because there are so many opinions about what real Tai Chi is and back and forth. It must probably be Wushu first and then maybe whatever they call “traditional Taijiquan” – whatever that is.

It is going to be a long road, precisely for the reason you said.