Postmodernism is a general and wide-ranging term which is applied to many disciplines, including literature, art, philosophy, architecture, fiction, and literary criticism. What about applying it to Tai Chi?

According to Wikipedia, Postmodernism is largely a reaction to the assumed certainty of scientific or objective efforts to explain reality. In essence, it is based on the position that reality is not mirrored in human understanding of it, but is rather constructed as the mind tries to understand its own personal reality. Postmodernism is therefore sceptical of explanations, which claim to be valid for all groups, cultures, traditions, or races, and instead focuses on the relative truths of each person. In the postmodern understanding, interpretation is everything; reality only comes into being through our interpretations of what the world means to us individually. Postmodernism relies on concrete experience over abstract principles, arguing that the outcome of one’s own experience will necessarily be fallible and relative, rather than certain and universal.

In general, the particular postmodern viewpoint I bring to Tai Chi movements is that every one has four dimensions of purpose: self-healing, spiritual unfolding, self-defence, and changing one’s psychological life stance. In counterpoint to a broad ranging multi-dimensional approach some practitioners want to be single-focused; they say that Tai Chi is just a marital art and say that those who say it is a spiritual practice are “too New Agey.” Others say that it is a spiritual practice and that those who look at it as a martial art are “caught up in their unworked through aggression.” Some say that a focus upon the psychological elements of the practice are just a modern intrusion on a self contained system that has everything needed without adding some Western psychological overlay. Most practitioners nowadays at least incorporate a few of these dimensions in their practice recognizing the value of a more integral perspective on Tai Chi.

Following the post-modern idea that each of us has to be true to our own unique vision and story, I have presented this view, backing it up with historical and anthropological research in my Secrets…book (2004), and in my keynote address to the National Qigong Association Conference that year. I took the Kabbalistic idea that the interpretation of the Old Testament is incomplete without looking at it on four levels, and applied it to Tai Chi. I also believe that looking at Tai Chi and Qigong as a four-dimensional initiatory process is part of the earliest Buddhist teachings (Tomio, 1994; Diepersloot, 1997; Mayer 2004). Regardless of the historical merit of such a four-dimensional interpretation of Tai Chi movements, by practising this way the practitioner is opened to deeper meanings and can find a multifaceted story expressed through their movements. I call this a “postmodern metaphysical point of view of Tai Chi. 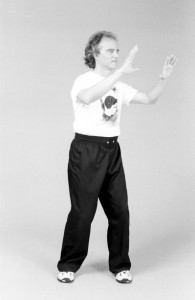 Let’s take for example the second Tai Chi Chuan movement, which some call Taoist Immortal Paints the Heavenly Rainbow. The practitioner starts with their hands in the stance of having both hands palms-down, as if holding two balls in a stream; then a counter clockwise circle is made to the position seen in the figure above. One self-healing purpose of the movement can be found when the practitioner stops the movement with the hands in front of the heart (acu-point CV 17) is that the practitioner opens their heart to the direction they are facing. Secondly, a spiritual/shamanic purpose of the movement can be embodied if a practitioner imagines that, like an ancient shaman, he or she is painting a rainbow across the sky. Thirdly, from the self-defense perspective, if someone is punching you, this movement makes a circle and a 45 degree angle to divert a force coming toward you; and this movement is part of learning how to yield to, not confront, and disarm an aggressive force. Fourthly, this type of movement can change your life stance toward such linear forces in life psychologically and physically, particularly when you assume the correct posture of slightly pushing out your lower back (ming men) as you imagine catching a medicine ball in front of your heart.

From a postmodern metaphysical point of view it does not matter whether this is how any other teacher or practitioner interprets the meaning of this posture. What matters is how a posture helps the practitioner to find his or her own connection to the world behind the world (Mayer, 2012). Postmodern practitioners of Tai Chi use their own meditations as a form of postural initiation, similar to Dr. Felicitas Goodman’s work (1990) with postural initiation. She has a modern person hold a posture depicted in an ancient pictograph, and the emphasis is placed on the current meanings they discover.

Following the theme of the journey to put our own unique twist onto the traditions with which we become involved is not so easy a task in a tradition that is based upon following precise movements just the way your master teaches them to you.  Traditionally, honouring the ancestors who transmitted the tradition from generation to generation is paramount, and many times for good reason. The angles and positions of postures do have their time-tested rationale for maximizing the flow of qi. However, when it comes to the purpose of movements, I believe long time practitioners also have their interpretations and views to give back to the tradition based on their soul’s inclination.

Along these lines, Hillman’s (1975) distinction between “spirit” and “soul” can be incorporated into the world of Tai Chi. On a spiritual level, Tai Chi opens the practitioner to the experience of an altered state where a merging with the sea of elixir can take place; however, Tai Chi can also be a “soulful tradition” as the initiate becomes aware of the images, thoughts, and feelings that arise during practice. This awareness can be the beginning of a working through process. For example, as a shaking happens in Standing Meditation a practitioner can ask, “How am I shaking loose some of my old life stance?” As the practitioner practices “roll back” and a blockage is experienced in the shoulder, the practitioner can “focus” upon how to let go of an old pattern of “shouldering” too much responsibility in relationship to others.

My approach to Tai Chi has grown in part from my background in humanistic psychology, where discovery of one’s own unique meaning is paramount.  As applied to Tai Chi Chuan, this means that instead of focusing on ultimate truths and contending about which of our interpretations is more “Tai Chi-ish,” I believe that from a metaphysical, post-modern view it is important to see that each of these four types of intention in Tai Chi practice contains its story. Each story has its value, which opens us up to a new world of meaning. As with the example of the movement of Taoist Immortal Paints a Heavenly Rainbow, every Tai Chi movement can be seen as a letter of a long-lost, right brain hieroglyphic alphabet. These letters (postural stances) open us to discovering the consciousness of another world, just as did the discovery of Egyptian hieroglyphics. 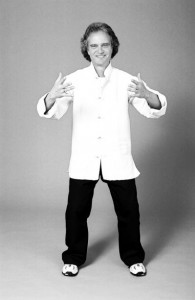 A story is being told in each dimension of Tai Chi practice. For example, Tai Chi push hands practice teaches us “not to contend and not to separate,” and here the initiate learns to listen to another’s story in their words and in their bodies.

One of the deep gifts of Tai Chi to those who are metaphysically inclined is that Tai Chi Push Hands practice (which I like to call Tai Chi Joining Hands Practice, or Two Person Self-development Practice) is a way to make the unmanifest world manifest. In a way that is unique, in my experience, as compared to other forms of spiritual practice, Tai Chi “tests” (sili) whether qualities of the unseen world can be manifested by the practitioner. In other traditions, a person surely works on developing qualities such as groundedness and yielding; but in Tai Chi Joining Hands one practises the embodiment of these qualities and having them tested in a particular way.

In this sense Tai Chi is a metaphysical art. Our culture mostly knows about “academic metaphysics” from the early Greek philosophers such as Aristotle and Plato, or from later academic philosophers such as Husserl (Fuchs, 1976), Heidegger (2000), and Merleau-Ponty (1964); as well there are “experiential metaphysicians” who emphasize making a connection with “the world behind the world,” and accessing altered states of consciousness for the purpose of healing and transformation. Every culture has their experiential metaphysicians — such as shamans, mystics, esotericists, Gnostics, and healers. Each of these terms has a slightly different connotation. So, for example, most Tai Chi and Qigong masters wouldn’t label themselves as metaphysicians. However, because they use their self-cultivation practices to cultivate the energy (qi) that is behind and comes through all of life, Qigong and Tai Chi masters could be considered to be working with the metaphysical aspects of the world of energy behind the physical world.

From a metaphysical viewpoint, the world is made of archetypal patterns (energy potentials) in the realm of “mind” which manifest as energy and then incarnate in the body. In Tai Chi Two Person practices, an initiate practises cultivating and manifesting incarnating certain essential archetypal qualities, such as grounding, yielding, and not colliding with and not separating from their Pushing Hands partners. The post-modern Joining Hands practitioner makes the living metaphors of Tai Chi Joining Hands practice, as applied to everyday life, a paramount focus. For example, in everyday life if your partner frequently criticizes you, you may instinctively attack back (collide with them) or choose to end the relationship (separate from them). As a psychologist, I particularly like the post-modern way of viewing the purpose of Joining Hands practice because it becomes a way of teaching “affect regulation” skills (Schore, 2003) moving from reactivity to equanimity; from fighting with to yielding from; and from abrupt withdrawal, due to lack of ego strength (keeping our ball intact), to sticking with a person and developing affect tolerance. This is post-modern, metaphysical Tai Chi push hands… a valuing of the amalgamation of traditions, finding personal relevant psychological meanings to age-old traditions, and working on changing our life stories in the bodymind.

Further, in more advanced practice of Tai Chi and Yi Chuan Standing Meditation Qigong the initiate learns to “become a Golden Ball,” (Mayer, 2004, 2009, 2012) so that when someone pushes on you, they bounce off of your sphere and may even spring up into the air (fajing). In addition to the internal martial arts purposes, the living metaphors for fajing practice involve resiliency, boundary setting, cohesiveness of self, and bantering when being verbally abused.

From a postmodern view, the practice of Tai Chi involves cultivating and embodying our chosen life stories. From this perspective, the inner tree of each of our lives is grown from the roots of hidden qualities, energies and stories. As we tap on the primordial root system from which Tai Chi grows, we practise cultivating our connection to the principles and energies that we want to embody from the world behind the world. 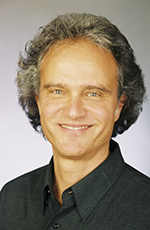 Dr. Mayer presents his integrative approach to bodymind healing at professional conferences, national/international workshops, universities, and hospitals; and he keynoted at the National Qigong Association conference. He co-founded the Transpersonal Psychology Program at John F. Kennedy University where he trained therapists for 12 years; and he co-founded a multi-disciplinary medical clinic practising integrative health-care.

He pioneered the integration of Qigong and psychotherapy, and was the first person in the United States to train doctoral psychology students in these methods. He is the author of twenty publications on bodymind healing including the just released book, The Path of a Reluctant Metaphysician: Stories and Practices for Troubled Times (2012). Michael’s guiding image of “two streams becoming one” guides him as he joins East/West, mind/body and ancient/modern in his work.