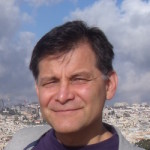 At the beginning of the 70’s, Hugo began to study traditional Gongfu in the chinatown of Lima, Peru. Later, he studied the healing arts with gnosis master Alfredo Vallés. In 1980, Hugo began with his Neijiagong training (internal Gongfu) and some years later he earned the teaching permission für Qigong, Taijiquan and internal movement arts.
Since 1988, Hugo is closed door student of Sifu Wong Cam Piu, 5th generation of Choy Lee Fut Kuen. Since 1995, he has been working as a coach of the Tchan Mou Tong School. As a disciple of the Buddhist monk, the venerable Thich Nhu Dien, Hugo is currently working as a referent for Buddhism at the monastery Vien Giac in Hanover, Germany.

18 Lohan Ch’i Kung was developed by DaMo, the father of Chan (Zen) Buddhism and of Shaolin Boxing. It was designed to further the health oft he monks. Constantly flowing, the exercises interlace tension and relaxation, elements of nature and imagination, internal and external strength. We will work on some parts of the whole sequence.