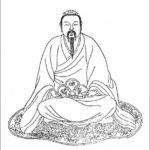 Meaning of the Chinese characters

„San“ is the numeral for three. The simplified Character for „bao“ depicts a precious thing – a jade stone (玉), the stone of the king (王) – under the symbol for a roof: a treasure or a jewel.
The number of three also conveys a symbolic meaning: In Daoism, three is the source of all things (cf. Chapter 42 of the Dao De Jing).

Chinese perception sees this entity of three, from which all life emanates, represented in the human body by the fusion and the transmutation of the three treasures: Jing 經, Qi 氣 and Shen 神. In Daoist inner alchemy it is thought that the San Bao connect man to Earth and Heaven (Yin and Yang).

Jing is the basic energy of the individual. If this kidney energy is consumed entirely, one dies. As vital essence of the physical body it is closely connected to the sexual act. Jing can also be described as sperm resp. ovary energy, which resides in the middle of the abdomen. Being the Yin component of man, it connects man to the earth and is thus associated with darkness and form (matter).

Qi is the link between body and spirit. In the San Bao it represents the neutral as well as the Whole. Comprehending both matter and energy as well as their interconnection, Qi is associated with the human itself as being between the earth and the sky. Qi resides in the middle Dantian. Being close to the heart, it is connected to thoughts and emotions.

Shen is the generative power. It resides behind the Third Eye in the upper Dantian. Being the Yang component of man, Shen connects man to Heaven and is thus associated with light and consciousness. Shen is thought to be able to connect man to Dao. It can be destroyed by Ego.

San Bao in Qigong and Neidan

In Qigong and Neidan (Daoist inner alchemy) the central points for transmutation of the three treasures Jing, Qi and Shen are the Dantian . Shen, coming from above (upper Dantian), transmutes into Qi in the in-between (middle Dantian) and at the bottom becomes Jing. Further training transmutes Jing into Qi and Qi into Shen. During the exercises the San Bao are merged in the unity of movement (body), breath (Qi) and imagination (spirit) in the lower Dantian.

In contrast to the bodily concept of Daiost inner alchemy the Three Treasures or Three Jewels of Daoist moral philosophy are a set of three virtues. This “second set” of San Bao is mentioned in chapter 67 of the Dao De Jing: Ci (慈), Jian (儉) and Bugan wei tianxia xian (不敢為天下先) – compassion (gentleness), frugality (sometimes also translated as moderation) and humility (i.e. the refusal to take precedence over others). According to the Dao De Jing not to aspire to these treasures is the way towards death.
In Buddhism a similar – though more spiritual – triad is known. The “San Bao of Buddhism” are: Buddha (the Enlightened), Dharma (the teaching of the way) and Sangha (the spiritual community).