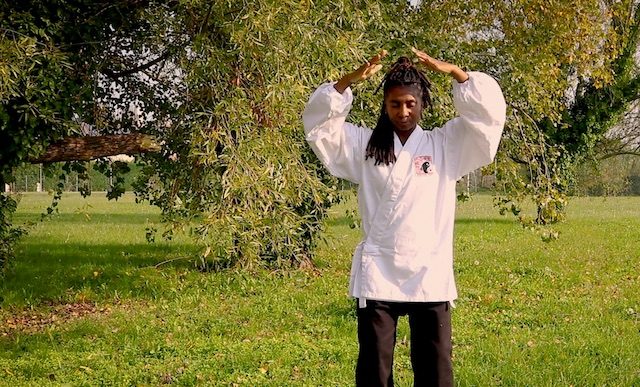 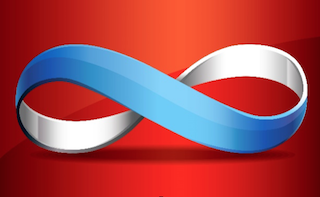 The Moebius strip is a graphic depiction first created in 1800 by the German mathematician August Ferdinand Moebius. As well as symbolizing infinity it represents the indissoluble unity of material and spiritual dimensions of reality: there is only an apparent separation between interior and exterior of the strip: in reality they are a single surface.
In Taoist alchemy, the most refined Chi – the Shen or spiritual energy – is condensed in the upper Dan Tien before liberating itself in the ocean of energy. Part of the Chi is produced and stored in the lower Dan Tien before it is distributed throughout the body by means of the system of meridians. The brain does not produce any type of energy, it consumes energy in order to manage the system, and for this reason the head is considered the most noble part of the body.
The theory which forms the basis of this first part assumes that attention, concentration and movement can activate and attract EMF (electromagnetic force) in points or areas of your body, and that – as the theory states – it is possible, by shifting your intention, to guide it through established pathways. The movement of intention (Yi) creates a wake of particles that can move through the tissues and liquids of your body. 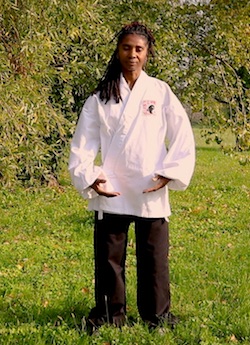 Focus on the top of your head, and imagine a figure of eight, (referred to in geometry as the lemniscate), laying horizontally on your scalp. Choose any point of the 8 and guide it along the path by slowly moving your head.
Activate the cranial pump combining the movement along the path with your breathing. Imagine moving apart the cranial plates and widening the seams while breathing out and bringing them together when breathing in.
Repeat at least 8 times.

Again, using your imagination, let the figure of eight descend into the brain and transform it into a Moebius strip (unlike the figure of eight), the Moebius strip has no point of intersection).
Guide the thread by mentally tracing a line that, crossing the two hemispheres, brings it near to the corpus callosum in the area between the two hemispheres.
The constant practice of this exercise, allows harmonisation of the functions of the hemispheres. This brings the activities relating to intuition and reasoning, (in the right hemisphere), and those of logical-rational functions, (in the left hemisphere), to a higher level of harmonisation and equilibrium.
Occasionally slow down the movemen and, with your mouth half closed and the tongue resting on the palate, emit a long ‘NNNNN’ sound.
The sound waves produced will provoke a mechanical vibration, which, directed by your intention towards the cranial vault, will conduct the vibratory response to the centre of the brain, (the domes of temples are used to focus energy in this way).
The centre of the brain is where the thalamus, hypothalamus, pituitary and pineal glands, (traditionally considered as gateways and bridges to spiritual levels) are located.
Before moving on to the next exercise, smile and thank the two hemispheres of your brain. 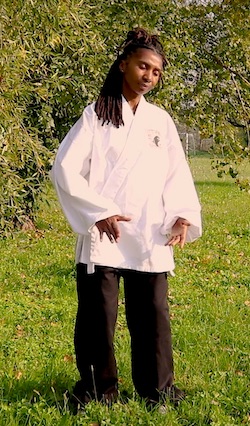 Place your right hand with the palm facing the Dan Tien and bring it towards your abdomen at an angle of 45°.
Slowly press your hand on your abdomen until you can feel the resistance of the Chi sphere within the Dan Tien.
Under the pressure of the existing magnetic field around your hand, the sphere within the Dan Tien will move slightly to the left.
Moving your right hand away and pressing with the left hand, the magnetic field will move and create a depression which will allow the sphere to move in the opposite direction.
At this point, introduce the image of the Moebius strip, and after having chosen a point on the strip, move along it harmonizing the movement of your body with that of your hands as if playing ball with the Chi sphere.
Continue with this exercise for a few minutes.

By moving your head and pelvis, the movements of the two Dan Tien are harmonized and transformed into a single movement. The balance between the two motions will ‘germinate’ the two poles (Yin and Yang) which, being opposites, will acknowledge, complement and join each other.
Collect and condense the energy produced, in the lower Dan Tien.

Gillian Reid guides you through this Qigong exercise with instructions including breathing and sound.