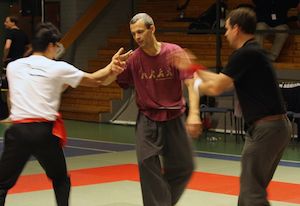 There is often confusion when I explain to people that tai chi is in fact a martial art. They have seen the hand-form, and it doesn’t fit with their ideas about fighting and the possibilities of violence. This is understandable, because there seems to be as much confusion for those within the tai chi world as for those who dwell without. The main reason for this confusion, I believe, is due to the popularity and profusion of one thing in particular: fixed-step pushing hands.

Fixed step casts the spell-like notion that any individual, however weak or lightweight, can deal with an incoming force whilst remaining stuck in one place. Thus, as you’ll know if you’ve witnessed any fixed-step bouts, the two opponents end up straining and struggling. The strongest, or most aggressive, often wins. A “win” in this case can leave the attacker so off balance that he/she has to struggle not to topple over, whilst the “loser” has merely been shoved enough for the feet to move, to no real effect. What this trains in the long run is this: if someone causes you to move your feet, you have lost and therefore should submit. The 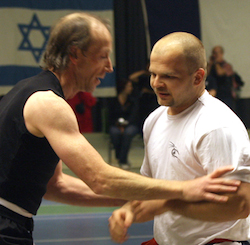 relevant adage is “You fight how you train”.  If it is suggested that we shouldn’t use force, then we could end up with those terrible American- style contests where neither opponent can ruffle a single hair of the other before one of the eight judges steps in with a swift reprimand. That’s not the answer either. The answer is this: there should be no “fixed-step” competitions. None whatsoever. Why would you ever remain stuck in one spot? Maybe if you were fighting someone in a phone box. But even then, I suspect you would still shuffle your feet for greater purchase and leverage. Fixed step trains a very, very particular aspect of the art, one that I think is given too much importance. “Rooting” is an important skill, but it shouldn’t be confused with locking our feet in place to the detriment of everything else.

In fixing our feet, we give away most of our art, our martial intelligence, and most of our training. It may sound crazy to say it, but mere stepping and footwork is quickly becoming the lost secret of our art. 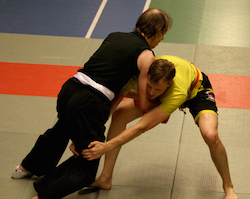 I have used tai chi chuan in a self-defence situation. It was movement that saved my skin, movement that allowed me to escape the knot of assailants. Fixing myself in one place really would have the “death ground” alluded to in the Sun Tzu: to be avoided at all costs.

If you have been struggling with fixed step for years, and wondering why it isn’t working, I feel for you. Since we ceased focussing on fixed-step quite so much, everyone has become more relaxed, with a defter touch and better awareness. But most importantly they can move, they can make the art work, and those much -vaunted applications appear naturally and effectively.

Fixed step in the beginning of one’s training can be used to get someone used to contact and some aggression. Fixed-step drills can have limited usefulness. But as a form of competition, fixed-step pushing hands is massively flawed, and emphasises qualities that are detrimental to the development of real skill in tai chi chuan. Perhaps we could say that the only reason to train fixed- step pushing hands is to find out for ourselves how pointless it is.

I should say that in no way do I mean to take anything away from the efforts and enthusiasm of organisers and contestants of fixed step competitions. But I do think we need a change, for the sake of the art.

Author: Nick Walser
Nick Walser is based in Hove, UK.