Laura Stone Interview (part 2) from December 2018 by Connie Witte. This interview was published in the TQT (Dutch Taijiquan magazine) and translated by Laura Stone.

You were visually affected again?

This is interesting; you connect it to the visual but it is what I feel at that moment, something happens to me kinesthetically. I’m not that good at connecting to T’ai Chi with images. It’s more like seeing how it feels and imitating that; I can easily imitate movements. I like some images, like the waves of the ocean, with the sound and how that water goes up and down, but when you start talking about mechanical things, no. 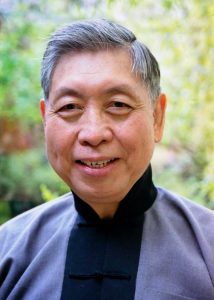 [QUOTE]
The slow, gentle and friendly movements of T’ai Chi Chuan are like the waves of the ocean. They roll on and flow again, producing an uninterrupted flow of energy.
Grandmaster William C. C. Chen

GM Chen is known for his body mechanics?

That’s right, he always emphasizes relaxing and letting go. Also how you can uproot someone else with effortless power. Like the waves of the ocean, those waves are not trying to swell up! Just relax and at a certain moment you can feel the energy rising; that was what attracted me. Those first years we trained a lot at his classes and workshops. Hands on. GM Chen trained personally with everyone.

Only later. In 1976 I went to Hawaii; my friend Peter Kneip studied calligraphy with Ho Tit-wah, who had just painted 100 works. When we met, I told him how I felt about every painting. It was magical, that sense of visual art; I came from music!
In 1977, I went back to Hawaii with Peter and did calligraphy twice a week with Ho Tit-wah. That was great; I had studied music and had been doing T’ai Chi Ch’uan for five years, I was already teaching; at that moment the two arts came together for me. It was, and still is, the experience of how you hold the brush, how the tip of it touches the paper, the interaction with the ink, the paper, the pressure, the concentration and the meaning. Years ago in Amsterdam I gave a workshop on single whip, expressing the movement like calligraphy, 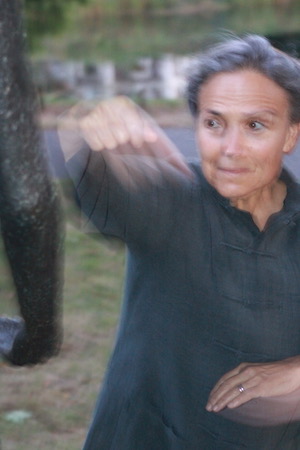 Her arms paint the movements in the air.
Ho Tit-wah wanted me to continue my calligraphy training. But I couldn’t do everything, so I continued with T’ai Chi Ch’uan and music and meditation. But calligraphy keeps coming back in to my life. That was the case in 1990 with Cong Zhi-yuan; he taught at my T’ai Chi Ch’uan school in Bloomington: Chinese painting,, calligraphy and Pakua.
Now there is Wang Ning, a Chinese man who has lived in Frankfurt for almost 30 years. I met him at the annual International Pushing Hands Meeting in Hanover; it’s amazing how he connects T’ai Chi with calligraphy. I invited him, in March to give a workshop here in Deventer.

In Hawaii I also studied four to six hours a day for six months with a teacher who was half Chinese half Hawaiian, Sam Kekina, an old surfer and boxing champion. In that half year with him I learned 12 forms. He liked to tease me with self-defense manoeuvres and that kind of woke me up.
At that time, 1977, Peter and I also followed a week-long workshop with Grandmaster Benjamin Lo. We didn’t know who he was! There I had my first experiences with sword, with holding postures and pushing hands. Benjamin Lo was a very warm and playful person.
After that I went to Taiwan for three months; I studied sword with Mr. Tuan You-chang. When you study sword you understand, this is a martial art! He was a warm, friendly teacher, Buddhist, and a bit heavy, but when he jumped it was as if he was flying, so beautiful.

At that time I was already quite frustrated with pushing hands with GM Benjamin Lo: he touched you and BAM, you were slammed against the wall. And now what? What should I do? Relax, yes, relax.
But with Grandmaster Chen everything was OK: he gives you suggestions, images, hands-on things, it was fun and he’s still like that, I think he’s such a special person. He says: ‘right, right, right’. Then you relax. Then he gives a refinement to be able to improve and understand the movement.
On my way back from Asia at the end of 1978, I visited him in New York. He said: ‘You don’t have that much money, come back later. Just watch the (beginners) class. That was interesting; no pressure to participate. I was completely sold. In June ’79 I visited him again and said: ‘I would like to take every class that is appropriate for me’. He asked: ‘Do you want to box?’ ‘Yes’, I said.

You were a pianist! But you wanted to box?

No, not really. I was a good girl and had never been a fighter, but he offered it, so I did it. Well, that changed my life. Boxing does something to you. Now back to body mechanics: so you have the softness and agility of pushing hands and uprooting, because he started with uprooting, and making sure you’re comfortable with intimate contact, and being playful. It was very active then, with many drills. I immediately invited him to my school in Bloomington, Indiana, and that was the beginning of something extraordinary.

Beginning in November 1979, Grandmaster Chen came to Bloomington two to four times a year and in between I went to him. That was very intensive and special. In 1981 people started coming from outside my own school. There was a core group that trained intensively with him in my school. I organised about 50 workshops with him. In ’82 or ’83, I was 30, I went to Hawaii as an assistant and asked him if I could name my school in his lineage: A Center for William C. C. Chen’s T’ai Chi Ch’uan. I received my diploma from him in 1986 and in 1991 he named me Master in a workshop. Both came as a surprise, by the way. At that time my T’ai Chi career really took off.