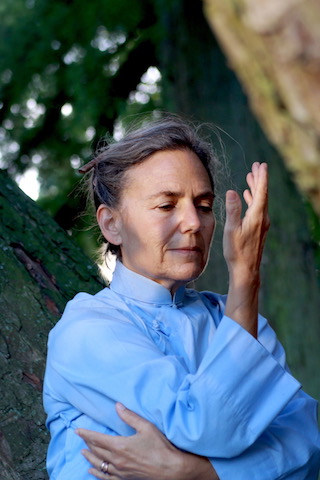 Laura Stone Interview (part one) from December 2018 by Connie Witte. This interview was published in the TQT (Dutch Taijiquan magazine) and translated by Laura Stone.

Quotes interspersed in this interview with Laura Stone:

Soft and Warm as Stone

A conversation about the life’s work of Laura Stone, grandmaster

When I arrive at The Studio in idyllic Deventer, the stately home with the name of a law firm in the entry way takes me aback for a moment. Until Laura Stone opens the door and embodies tranquility as she appears.

Temporarily anyway, because in the living room, next to the comfortable armchairs, she immediately takes the lead: ‘Have you seen them?’ and points to a room-high wall hanging on the opposite side of the room. Against a warm soft red background, the embroidery shows eight figures in vivid colours; the eight immortals from Daoist mythology.
Laura: The wall hanging was embroidered at the end of the 19th century and brought from China to Indiana, USA, close to my home in the early 80s. Paying for something like that, it wasn’t cheap! But it made such an impression on me that I took on the responsibility of ownership. It’s all because of T’ai Chi, that I was so touched by Chinese culture.

You became involved with T’ai Chi at a young age?

I was 20 when I started, but had seen it for the first time three years before, from a student of Grandmaster T. T. Liang. When I was seventeen I went to Amherst, Massachusetts, to the Graduate School of Education, an alternative, experimental school; I was allowed to attend classes along side the graduate students. A photography and yoga teacher showed me T’ai Chi one day. That made such an impression: it’s been almost 50 years, but I remember it exactly, I even know what I was wearing. He also showed me a book about T’ai Chi, maybe that of GM T. T. Liang.
Then I went to a small Liberal Arts College and conservatory where I practiced yoga because there was no T’ai Chi. At that time I saw Judyth Weaver do the form of Professor Cheng Man-Ching, but that was far away from where I lived. I was searching; at such a young age I wanted to be more calm. I’m from Chicago and life there is busy and competitive, people talk loud and fast. I didn’t feel connected to my body either, and definitely didn’t want to be asked to dance.I didn’t do that. I wasn’t really athletic either, but I was active, and in team sports at school I was a bit aggressive, always at the front. T’ai Chi was really good for me; it gave me not only physical, but also mental peace.
On July 4, 1972, I saw an older man under a tree along Lake Michigan doing T’ai Chi. I never saw him again, but Robert Cheng, his teacher, became my first teacher.

You were visually touched by T’ai Chi? 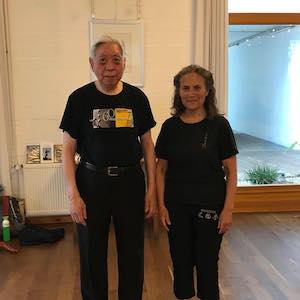 When I saw it, I knew immediately it was for me. I went to him three or five times a week, and although he also did a form of T’ai Chi Sanshou, I didn’t realize it was a form of self-defense. For me it was a kind of dance; I was touched by the interaction, by the beautiful movements.
When I went to Indiana University to study music, I was looking for someone to continue to train T’ai Chi; 35,000 students but no one who taught T’ai Chi. At the Free University, you could offer classes or make requests for classes. I filled out a card: ‘I’m looking for people with whom I can practice T’ai Chi’. Two weeks later my name was on a poster, as a teacher of T’ai Chi, and soon after that I was in a conference room with 20 people. Four of the attendees wanted to learn T’ai Chi from me. Of course I asked my teacher, because, although intensively practicing, I had only been training for 15 months: ‘May I teach T’ai Chi’, and he said: ‘If you are honest about what you know and what you don’t know’.

Quickly starting to teach can be a boost for your own learning process?

I am a precise person and I’ll never forget that first year: now I can start a movement at any moment of the form, in the middle of a movement as well, but not then. My teacher said, “You think too much.” I couldn’t do anything else, it was my first year.
At that time I met the man I was going to travel with; his first T’ai Chi teacher was Grandmaster William C. C. Chen. My roommate in Bloomington said that his piano teacher was going to give her debut at Carnegie Hall, did I want to go to New York with him? So yes, 14 hours of driving, no problem! It turned out to be great timing, because when I visited Professor Cheng Man Ching’s school, Shr Jung, the professor had just been dead for about six months. His dedicated senior students were there: Maggie Newman, Ed Young, Lou Kleinsmith, Tam Gibbs, maybe also Mort Raphaël, Stanley Israel, really the inner circle, were still together there. I was allowed to push hands with them. Great.
I also went to the GM Chen’s school. He was practicing a push hands exercise with the students called “bread dough”, where you push directly on the body of your partner to move with it and to soften up. GM Chen was pushing on the belly of a pregnant woman. So beautiful. So relaxing and enjoyable. Fine training and atmosphere.