The interview with Faye Yip was led by Nils Klug in the context of a Workshop on Ba duan jin given by Faye in the Tai Chi Studio, Hannover, in Summer 2016.

The interview with Faye Yip part 5 – QIGONG (and Kids Wushu) 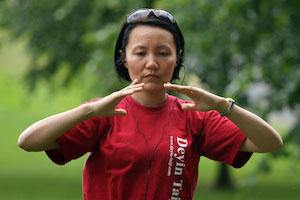 My Grandfather, that’s my father’s father, he was trained in traditional martial arts, but he used Qigong in a healing way. He worked and used Qigong in hospitals all his life. A lot of my Qigong work, my early Qigong ideas, were inspired by my grandfather. When I was small and he raised me for three years, I used to watch him treating his patients at a hospital. At that time it looked funny – why, how can you just use Qi to heal? I understand it now, but when I was small and I had my tummy upset, he would just massage on my back to do something. And then it is just gone and it is like magic. – You do not take any pills. So a lot of seeds for the healing power of Qigong were sowed into me and kind of grew back in me in later years. So that is what in my school we cover more or less. On the sideline, I still love some fast and powerful stuff, so I have a small Wushu squad for children – not a big squad but just to keep the youngsters a little bit something to work on to improve and for joy, like what I had: to experience the joy of being active, being disciplined and respect and all of that.

Did you already practice Qigong at the time you were beginning to teach? 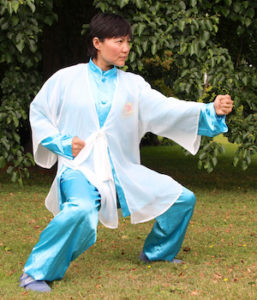 At that time we used simple Tai Chi “static” – I wouldn’t say static but almost like standing still – postures to warm up to warm up to prepare for Tai Chi. It’s a Tai Chi movement based Qigong. The projection of the Energy is Qigong energy but we didn’t have a set of Qigong movements until later my father introduced the Eight pieces of Brocade. This is the earlier or traditional version than the Health Qigong later on. So we have been practicing the older version of Eight pieces of Brocades since my father, I think in the 90s/mid 90s – I was already teaching a bit in the UK then – he introduced the classic ba duan jin, Eight pieces of Brocade. Ever since we have always used that as part of our class and practice until obviously the Qigong repertoire expanded a little bit more.