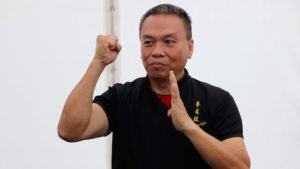 From 1977 on James Lau K King was Master Huang’s close disciple until his death and he also enjoyed his special 3 trust. He works as a journalist and chief editor of the China’s largest daily newspaper in Malaysia and is Secretary- General of World federation of Fuzhou Associations. He served formerly as Coach and General Secretary at Master Huangs Taiji School in Malaysia. Some years ago he began to develop the system and started his own school. Since 2006, he visits regularly as a guest teacher by invitation of his students Niki and Yonghui Deistler-Yi into Shambhala Taiji association in Vienna/Austria. The two Taiji-teachers also organize regularly travels to Malaysia to give their students the opportunity to study Huang-style from first-hand by Master Lau as in the Huang School of Master Yek Giong in Miri/ Malaysia.

The system of Master Huang Xingxian (1910-92) is based on three columns. During his youth Huang learned Baihequan – White Crane Kung Fu, a style of his native town in Fujian, and Lohanquan, an ancient Shaolin style from a famous master – Xie Zhongxian, his master disciple Chen Shiting and from another expert, Ban Chuangnian. Later, he learned Taijiquan from Cheng Man Ching. Huang Xingxian knew how to merge all three styles to form a complete system and to use their particular strengths. Hand forms, partner exercises and the practice with traditional weapons are balanced with each other.

Themes: I will share few methodologies to bring human body to the Dao of Yangsheng 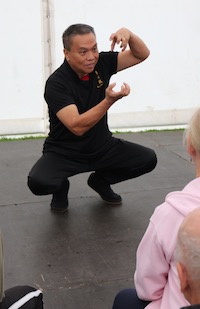 A. Wudang Qigong (武当氣功）
To cultivate inner peace and and harmony.