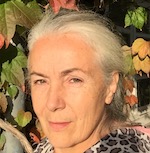 Marianne Plouvier has begun her practice of Yangjialaojia in 1990. She has been a teacher at different international Taijiquan meetings, amongst others in Italy, Scotland and Bulgaria. Marianne is author of “Le Taichichuan” [Taijiquan] (2012), “Nouvelle Lecture du Taiji Sabre” [A new interpretation of Taiji Sabre] (2015), «Nouvelle Lecture du Taiji Épée» [A new interpretation of Taiji Sword] (to be published in summer 2017).

The „Eight pieces of Brocade“ are an ancient form of Qigong, which enables to “form” a body structure favouring the work of the inner energy, the Qi. The movements initiate a deep abdominal breathing.

The workshop will begin with gentle warming up and stretching, followed by the study of the first three pieces of Brocade: “Rip the soil and support the sky to regulate the triple-warmer”, “Draw the bow right and left, targeting the eagle” und “Lift the arms to regulate spleen and stomach.”

Working with a partner – Tuishou – undertaken in an academic, i.e. non-combative way is a great method for the development of physical abilities and mental reactivity.

After the initial warming up and stretching, the four basic energies of Taijiquan –
peng, lu, ji, an – are worked on with a special focus on precision and sensibility.