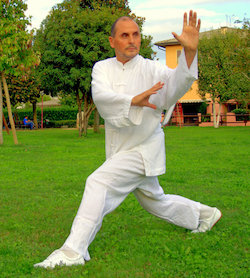 is one of the three known Chinese Internal Martial Arts, and is the youngest one, since he was divulgated and diffused around 1850 in the Beijing and Tianjing area. The fighting ability of his founder, Dong Haiquan (1797-1882), his special footwork, the specific way of training the body and the number of skilled specialists he taught and helped him to spread his art: all this made Baguazhang a highly-reputed and effective combat art. Dong himself made his fame inside of the Imperial Court and soon his style became the combat method of the last emperors in the Prohibited City.

Where was Dong’s system coming from? It’s still debated if Dong simply spread an already existing system or if he created it from scratch, but there are no significant evidences. Of course, there are other systems (Tian Hui, Yin Yang Ba Pan) that claim strong similarities to Baguazhang, and at some points Dong self was reluctant to give more details about his teachers or where he studied them. According to recent researches, Dong created in the end his own method, based on what he already trained in his youth, and adding the skills of circle. He had already a good knowledge of external martial arts, like Luohanquan, Bafanquan and Erlangquan, and since he was in love with martial arts tales, he went for more martial knowledge around in his country.

He arrived in his journey on some holy mountains, Ba Da or Jiu Hua, in Sichuan, and there he found Daoist monks practicing a very special meditation, not sitting but walking in a circle. Dong had the chance to practice and study with them. For a long time he walked around a tree “chasing him”, until he had the feeling that the tree was chasing him. After some years of hard training, Dong got the quality his masters asked him to achieve, and so he went on his way to Beijing. His body had been deeply changed by his practice. We know that historically the Long Men Daoist sect had a kind of circular walking meditation, so the source of Baguazhang could reasonably be connected to them.

After Dong arrived in Bejing, his skill was soon recognized, he got the status of a high-level fighter, and his many students got great reputation in the martial arts world. Since Baguazhang shared many body energy principles with Taijiquan and Xingyiquan, in the first half of the 20th century masters and teachers started to talk about the concept of Neijia (Internal Family), putting the three arts in the same “family”. Taijiquan had a very strong influence on the new evolution of the martial arts which followed the difficult times of the Boxer Rebellion in 1900, and Baguazhang was also quite renowned. The most influencing writer about practice and theory of Neijia was Sun Lutang, who wrote five books in ten years on the three sister arts and set the guidelines for the understanding of Chinese traditional martial arts that last until today.

What makes Baguazhang so interesting

What makes Baguazhang so interesting – not only as a martial art, but also as a Daoist health and wisdom art – is the way he develops the body using specific tools: 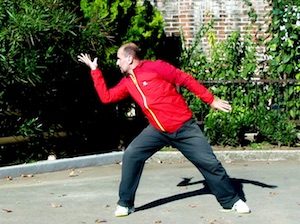 Teaching the body how to move, properly aligned, is really a hard task for the human mind and body, because it demands a great awareness, constant adjustment, mental stability and strong commitment. The positive outcome is the quality of the body (shenfa) that becomes coordinated, strongly connected and able to move always together. Since Baguazhang respects the energetic and physiological principles of Chinese Medicine, he has a strongly positive impact on health and is recommended for many chronic diseases. It opens the body joints and releases useless tensions. It makes the body flexible and adaptive.

The three aspects we are going to analyze during these days in Hannover are all related to Baguazhang as an art of longevity and nourishing life, which is perhaps the strongest and deepest part of Baguazhang itself. Walking the circle, breathing properly and stimulating the eight Extraordinary Channels form the basic requirement for a correct Baguazhang practice, and have the power to transform simple physical activity in a complete work of Neigong (internal development), which has very good consequences for health and strength. “Internal” means that we develop trough listening our quality of movement taking into consideration and being aware of what happens inside, and guiding the process.