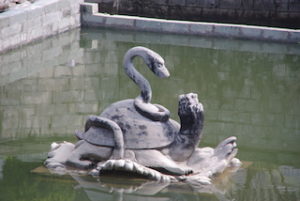 I’m standing in front of an unknown door. Behind it there could be anything: a modern gym, a traditional hall of learning with a small altar and the aroma of incense, a multi-purpose-room that is also used by dance- and rehab-groups – or I stand in one of the many school-gyms that are open to sports-clubs after lessons. Behind this door there are people I might have never seen before and things I might actually have never heard about until the moment – or things that give things I already know quite well a new dimension. I think I’m a very happy person because up until now the people on the other side of these doors have all been extraordinarily nice, open for new ideas, open for questions – and almost as curious as myself. And I mot certainly learned something new from each of them.
If you want to believe the movie “Fearless” – and seeing how often kung fu-narrations change according to what the narrator wants to prove at a given moment it is as historical as much else – Huo Yianji, the hero of the piece, has always been prepared to learn from his opponents aƒs we can see exceedingly well in his relationship to his very last fremeny. And the kung fu society that is founded in this movie takes as one of its basic premises to meet in friendly bouts. And especially in communal training with a lot of exchange of knowledge. A surprisingly peaceful thought for people who normally spend a lot of time learning how to violently deconstruct another’s body. But as most of you know this same expertise can also be used to heal somebody.This is what most of the practitioners of the internal martial arts have put in the centre of their work.

To get the most from this basic concept it is absolutely necessary to keep an open mind. When visiting a new school to learn something new being at the same time completely confident of the worth of “my” martial art – and especially its superiority – I would rather be inclined to regard something that contradicts things I have learned before as inferior or faulty. Following a Daoist attitude after which the classification in “good” or “bad” would already be a fallacy of the highest order, this would be really the biggest mistake possibly to make.
A very nice example is here the one of Po. The Kung Fu-Panda observes every new fighting technique with open and profound joy and this even in the moment he becomes its hurting and bleeding victim. And so he learns a surprisingly lot and is able as the Dragan Warrior (connected to the earth and so able to absorb and combine the effects of the other elements into himself) to “ingest” every kind of knowledge. As well as he ingests every kind of food in large amounts – as I experience in the communal meals with the people with whom I have trained only a short time before in their schools.
The Japanese call this kind of openness “shoshin”, the “spirit of the beginner” and this is certainly something that is worth to be embraced on one’s personal path in the martial (or other) arts. Heero Miketta and some others had founded a group by this name some years before, a group subscribing to the idea to cultivate exactly this way of thinking and to bring together martial artists from every school and style possible to learn together (and of course to have nice meals afterwards). From this have grown some subgroups such as “Missing Link” which examines how the techniques of Shotokan karate have developed from traditional kung fu – and here especially from Wudang Pai – and also, how this knowledge can enrich the teaching and understanding of karate. In Manchester, Dortmund and Ratingen you can observe what this can lead to and the meetings and seminars of these people are always a martial artistic and personal joy.
In the Netherlands we find with Stichting Taiji/Jianfa and the Silk Road Dojo another group of very nice people who are glad to invite strangers into their workshops and trainings or are prepared to visit other groups in other countries – either to teach or to learn themselves. In every of these come-togethers each visitor is asked to present or teach one basic exercise from his or her school or tradition. So you always drive home with at least these new basic exercises at the end of a normally anyway full learning day. And on big meeting as the “New Years Pushhands” in Siegburg, the Taiji-Forum and the big pushahnds-meeting organized by Nils Klug in Hanover you also find teachers and learners with open minds (and hearts). And also in the subjects of meditation the traditional Chinese and Japanes healing arts and Ayurveda you always find people who show such openness and curiosity for the other arts and who are prepared to share their knowledge and to take new impulses from those they are teaching.


Looking back on our own – European – navel 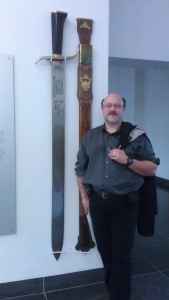 But in the last two decades the study of martial arts has also motivated some very curious people to not only concentrate on the Asian martial arts but also on the European ones which have – at least n writing – an older tradition. They have started out with the same openness to read the historical sources and treatises, to experiment – in part quite comprehensively – with techniques, materials, different models of weapons and armour and they made some astounding discoveries. And they have exchanged their findings across the centuries observed, the styles in different countries and many other aspects. Since many of them had started off in the Asian martial arts, they have faced off in armour with show-fighting katana and show-fighting bastard-swords and fought friendly bouts and thus at least slightly varied some of the prejudices about the proposed superiority of a certain weapon or a certain style. !You can’t stop an in-coming katana with a sai” does seem a bit dubious after having seen how twenty attacks with a bastard-sword or a bihand-sword have been deflected just moments before the second sai impacted quite painfully on a gambeson. Katana tend to be lighter and more brittle than modern show-fighting weapons – and they are not really faster.
And so the idea of openness, of life-long learning and the question “Wouldn’t it be interesting…?” been at the foundation of the worldwide community of HEMA (Historical European Martial Arts) and spread it everywhere. And these practitioners are also always prepared to go back to their personal (Asian) roots and in this way to widen the exchange of knowledge and learning. An exchange that has been exploding with the advent of the internet.
In the internal martial arts it is one goal to move as natural as possible, to get to the state of ziran (naturality) in intentionless action (wuwei). Or as Master Shifu in “Kung Fu Panda” very unnaturally intones: “Inner peace … inner peace … INNER PEACE.” Okay, he is still learning. And in the end he makes Po his teacher. And afterwards – of course – they all have a big meal together.

Community, friendship and peace through martial arts – a tall order

In “Fearless” the aim of the newly built society is the peaceful exchange. The teachers I got to know in Wudangshan, the ones I have met here and such authorities as Wang Liping, the master of the Longmen Pai, have said for many years now that the meditative and restorative elements of our martial arts should come out of the small hidden schools and the monasteries to be brought into the world and to form around them a community of people promoting peace. Be it in conventions and/or in the Longmen Pai by meditating at a given time in your own home. Thousands of people all over the world who are sitting down on their meditation cushions trying together to create as much positive and restorative energy as possible. Betruth, quite a big endeavor.
But already the friendly and open atmosphere created by the people I have had the good fortune to meet on my personal path through the martial arts, the conversations, the mutual massages, the leraning about interests these people have aside from the martial arts, the many, many tasty meals – one more aspect of the martial arts world that Kung Fu Panda demonstrates quite truthfully -, the tea drinking groups, the celebrating, the watching of movies on screens, walls and stretched bed-covers in dojos, wuguans or gyms, not to forget the communal singing (Thanks a lot, Tian Liyang) – all these not necessarily global but often intentionless and natural acts of friendliness, openness and largess – they have enriched my life. The – often peripherical – participation in projects that bing together people in the described ways and that further the coming together of people in general without a political or ideological intent (in a way wuwei), simply from the thought and the natural feeling (ziran) to do something that is so very right is certainly one of the most important components of the martial arts in our time n which peace in everything has become the most important goal of all.
Okay now, that’s enough of this. Let’s eat.
Greetings, 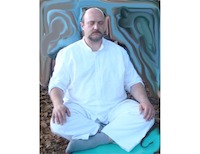 (1968) has trained in the martial arts since his seventh year (judo, ji jitsu, Shaolin Kempo, Kendo, Aikido, Ving Chun, Ninjutsu, sh’an shaolim si tao, wudang pai, HEMA etc.). Since 2006 he has found at the Tao Chi, Duisburg (Horst Kuhl) his personal home in the wudang pai and since 2009 he is training at the Wuguan in Mülheim an der Ruhr (Jo Augustin) and wudang jian in the Gecko in Hattingen (Birgit Mittag). He is certified Bonsai-children instructor (Shoshin) and from time to time teaches his colleagues and pupils at a public school in Duisburg. Together with his wife and some collaborateurs he has written some short stories for the teaching aid “Kinderkampfkunst Geschichten” edited by Heero Miketta.)