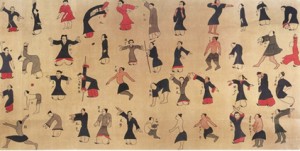 The history and the origin of the 8 Brocades are unclear. Research can neither establish when nor by whom the 8 movements were originally created. Today, the origin of the routine can be regarded as an evolutionary process. In hindsight, its development into today’s form and its transmission over the generations presents itself as a joint cultural effort of practitioners, teachers, artists and educated writers. Nevertheless, we can pinpoint some stages of development.
The theory of the 8 Brocades’ health-related movements is rooted in the Internal Classic of the Yellow Emperor (Huangdi Neijing, literally: The Yellow Emperor’s Internal Canon), a medical text from around 300 BC which sets out the basics of Traditional Chinese Medicine. Indeed, some of the movements are similar to a painting on silk which has been discovered in an excavation of a Han burial site in Hunan Province (China), in 1973. The contents of the grave of a female on the Mawangdui tomb site in Changsha are dated back to the 2nd century BC.

Much later historical documents from the Song Dynasty (960-1279) mention the notion “ba duan jin” and give evidence about the practice of a form of – probably seated – exercises with this name.
In Ming Dynasty and Qing dynasty, considerable development took place. Different routines evolved, which can roughly be classified as a bifurcation into a Northern and a Southern type of 8 Brocades. As both versions show numerous similar characteristics, they are believed by some to be evolved out of one source.

At the End of the Qing dynasty, i.e. around 1900, the 8 Brocades were among the first Qigong sets to be conceived as “traditional sets”. It was the first routine with fixed names and a clear chart illustration for practicing.

In the late 1950’s, practicing Qigong for health reasons became a political issue in China. The government promoted Ba duan jin by publishing books via its “People’s Sports Press”, initiating a compilation of the practiced styles and sub-styles as well as encouraging modification and unification of the different “traditional” variations. Integration and assimilation for better understanding and practicability were the main focus in this time. Since the end of the 70s resp. the beginning of the 80s, the newly standardized Ba duan jin forms part of the official sports curriculum of colleges and institutions all over China.

Today, Baduanjin are practiced all over the world in different traditions.

Taiji Forum wants to thank Faye Yip and the IHQA/BHQA for their kind assistance in research for this article and the permission to use information provided on their website: health-qigong.org.uk