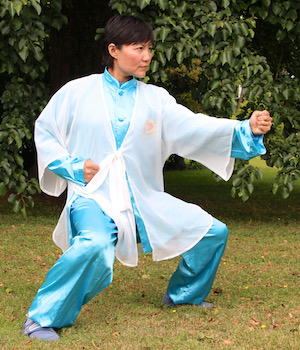 The 8 pieces of Brocade developed as Yangsheng practices, as part of the traditional way to “care for life”. Today, Ba Duan Jin – understood as exercises working with Qi to further one’s health – also form part of “health qigong”.
Due to this common root, all types of Ba Duan Jin are practiced as rooted in Traditional Chinese Medicine. Their thought system is based in the traditional Chinese perception of the human body, heart and mind as a whole. The exercises system of the 8 Brocades thus works with the concepts of meridians, life energy (Qi) and discusses (positive) flow against (negative) blockages. As a movement-related health care system, the 8 Brocades are at the same time related to and totally different from the Western approach towards health gymnastics, which tends to focus on external aspects of movement. See also our article Ba Duan Jin – Types and Styles

The 8 Brocades complement the aspect of physical exercises by working on the cultivation of internal energy. To further the often mystified “Qi flow” in this context basically means to focus the body work on activating bodily functions like deep respiration or training and supporting the heart to enhance the blood flow. As a meditative routine – meditative used here in a sense of a quiet, deeply rooted practice – the 8 Brocades also offer a way of spiritual cultivation. Aiming at the naturalness of movement and resolving blockages by sustainable changes in body structure and posture also means to work on the use of intention in movements. Not to force things, not to willfully subdue the body to aspirations of heart and mind while at the same time expanding one’s comfort zone, lies at the bottom of the practice of the 8 Brocades.

The 8 Brodaces as a cure for illnesses

The 8 Brocades are often promoted as helping to cure illnesses as e.g. coronary artery scleroses, osteoporosis and in extreme cases even cancer. These claims are not verified. There is not any proof for these (miraculous) effects and therefore these statements are untrue. Like any other moving exercise, regular practicing of the 8 Brocades improves the cardiovascular function if one compares the results to those of non-exercising people.

It can be shown, however, that the characteristics of the exercise system of the 8 brocades further the following bodily functions:

General balance – is developed by regularly practicing coordinated movement on one or two legs.
Limb strength – By working on the stands (“sitting”) and letting the tension of the torso go, the legs – and with them the strongest bones and muscles in the human body – are tasked to build a solid base, which develops over time. Forming tensionless postures with hands and arms changes one’s way of moving into a more powerful (because less ineffective) use of one’s arm muscles.
Respiration – By adjusting the body posture to a more upright position, the ribcage is opened; developing a deep, quiet breathing eases the respiration process by optimizing the working of the respiratory muscles.
Blood Circulation – By moving, optimizing one’s posture and stretching along the meridians, circulation to the far ends of the body (most visibly in (no longer cold) hands and feets) improves.

Apart from the more physical (external) effects laid out above, there are also positive internal aspects of Ba Duan Jin:

Relaxation – is the result of the interchanges of tension and tension release during practice. The nervous system is calmed down, one lets go of the “stress” of life.
Mindfulness – Ba Duan Jin’s requirement to move very slowly and precise may further concentration and mindfulness in movement.
Feeling – Using one’s imagination while doing the movements with devotion, one has the chance to develop one’s emotions and bringing them into action.

All in all, the aspects mentioned above are the reason why the 8 Brocades are commonly said to delay the aging process, to strengthen the immune system to a degree and also to improve one’s mental health. It can be said that the 8 Treasures are a good companion for anyone interested in active healthy living, but there is no proof that they have specific disease fighting powers of any kind.