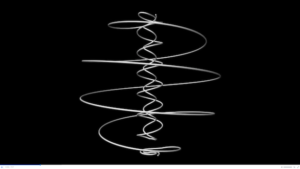 We, like all other beings, are expressions and instruments of creativity. The Universe is immutable in its expression of infinite vibration of cosmic “Chi”, it’s force and essence. Living and non-living things are systems and processes created and used by the universe in order to manifest itself and express creativity. The space in which this phenomenon takes place is a resonance cavity, a hollow space, a force field or cosmic egg and its state is “Wu Chi” the undifferentiated void. In this cavity, never-ending manifestations produce and follow spirals and whirls. SPHAERA ELIKOIDES reproduce a synthesis that symbolizes the path which Life itself follows in order to become tangible, to maintain and reproduce itself. Life, the pathways and energy are a unity.

HOW TO USE THE ELIKOIDE SPHERE

Suspend the sphere by a thin silk thread. Wind it up by spinning it clockwise and observe its motion as it unwinds spinning anti-clockwise thus returning to clockwise, ever slowing until it comes to a stop. Its tendency to reach immobility represents the entropic principle. The sphere represents systems and the form. Our action, the energy and the intention.


Learn more about the Biospirals Method