In this 5-part interview series, Ken van Sickle, photographer, Tai Chi Master and student of Cheng Man Ching in New York, talks about studying with Cheng Man Ching and his desire to capture Cheng Man Ching’s spirit of learning and developing in the movie “The Professor – Tai Chi’s Journey West”. Further points are the sense and non-sense of lineages, the crucial question of “what to get from a master?”, Tai Chi goals and finally the meaning of Tai Chi weapon training, especially concerning the sword as instrument of the Dao.

The interview was conducted in the context of his Tai Chi sword and fencing seminar in Hanover, Germany in summer 2017. 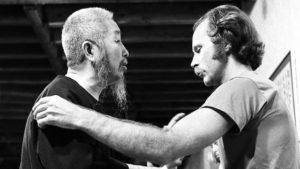 He vividly remembers being a student of Cheng Man Ching back in New York of the 60’s/70’s and the structure of Cheng Man Ching’s classes – teaching one movement a week to the beginners, so that a form class took about 9 months. In adaption to the West and the speedy lifestyle of New York, the sword form class was accessible thereafter, even though where Cheng Man Ching came from, a student was not supposed to learn sword after many years of dedicated studies. But not only the external framework of teaching, but also the way of instruction had been adapted by Cheng Man Ching, who was facing many challenges compared to his own rather traditional formation. Women were allowed in every class, and no difference was made in teaching them. Although he was very serious concerning the practice of his arts, Cheng Man Ching expressed a joyful attitude whilst teaching in New York, especially during the free fencing sessions with his students.