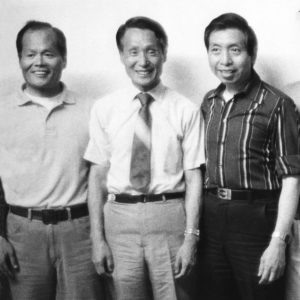 In the 4th part of the interview, Ken van Sickle talks about some students of Cheng Man Ching, the “second generation”, especially about two of the older students who studied with him already in Taiwan – William C C Chen and Dr. Tao Ping-Siang – and two of the New York students – Stan Israel and Tam Gibbs. Ken recollects personal impressions and what their individual characteristic approach towards Tai Chi means/meant to him.
Concerning Cheng Man Ching’s time in New York and the reasons Cheng Man Ching went there, Ken remembers that Cheng Man Ching had been invited to the UN to show his paintings and – in the course of his stay in New York – was asked if he would like to come to New York for a longer period to teach. This was at first – if Ken remembers correctly about 1962/63 – a joint effort also backed by the Chinese community. Chinese Americans and “hippies” mixed in the school, but interests differed. According to Ken, the Chinese were seeing the place of the first school rather as a social club, while the New York hippies were searching for a guru and for news from the east and/or were in to it for serious Tai Chi instruction. As the ways of these two groups parted with the Chinese attendance declining, the hippies taking over, the latter returned to find the place barred during one of Cheng Man Ching’s absences, while he was back in Taiwan to settle things, as he used to do every now and then. As it was felt the place was closed for Western students, there was a need to find a new room for a new, “second” school.