Tai Chi goals: What to get from a master and the unique quality of push hands 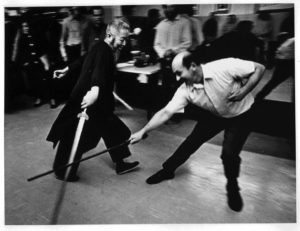 Speaking about the students in New York, especially with a view to the so-called “earlier six” and “later six”, Ken points out that they were different kinds and types of people who learned from Cheng Man Ching what fitted into their personality and their strength. According to Ken, what to get from a master is influenced by character, personality and personal strengths (and possibly weaknesses) which individually determine what one is able to grasp: be it the martial, the philosophical or the health aspect. “Getting what you can get” is rather an individual process than the completion of a preset formation. As an example Maggie Newman, herself being a modern dancer with a background in karate, developed the yin energy part, Stan Israel, who practiced judo on a national level before, got into the martial aspect, while Ed Young, who worked as an artist, interested himself in the philosophical part. The main point of learning what goes along with your personality and who you are – instead of following a laid out path – is the challenge to develop your personality on the way. In Ken’s opinion, there are few people who are open and “sane enough” to be able to get “the whole thing” from a teacher and even people that go further will make changes relative to their personality and their physicality instead of doing exactly what the master did eben if they wish to do so. The many aspects of Tai Chi as a martial system, an exercise system or as practical Daoist philosophy thus provide diverse connection points for all kinds of people. Speaking about his own way, Ken was not interested in becoming a push hands champion or a fighter, he was fascinated by the philosophical aspect of longevity and the idea of leading a happier life.

Calling into mind Mario Napoli’s way of seriously going into push hands and fighting, Ken elaborates on the unique quality of push hands. People meeting each other and putting hands on each other, experiencing other people’s energy is an unrivaled experience which may range from communication to competition. This kind of energy exchange practice is unknown to other meditative systems like e.g. Yoga. Contrasting the wide range of push hands practice – from the exchange of loving energy to competition energy – with “win or loose” kung fu where people essentially work against each other, Ken stresses the sensitivity aspect as the most important point in pushing hands. Relating to the example of the two-man saw, which only works if both are aware of what the other person is doing, the key to push hands is to find intelligence within the contact, to learn to feel what another person is doing relative to you. 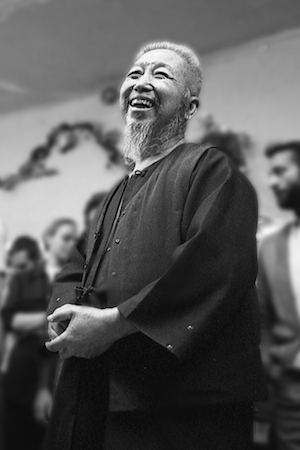 According to Ken, this aspect can also be practiced in sword fencing, which he feels as being less invasive. For him, the beauty and simplicity of fencing is that all is revolving around one contact point only. Working with one contact point at the blades, the sword serves as a feeling instrument. Moving the swords together in contact, establishing a rhythm, one may even be able to close one’s eyes without loosing contact. Thereby, one becomes more sensitive towards another human being and to have a relationship, be it through the sword as an instrument of the Dao or through hand contact. One goal of sword practice would therefore be to take the simplicity of fencing back into push hands.

Understanding taijiquan and push hands practice as a way of dealing with other persons can also have a therapeutic aspect. This experience of oneself in the context of a group or a relationship which may already begin when practicing the form in a group (Why am I always faster than the others? Why am I behind?). – Behind the “superficial” Tai Chi goals, which range from martial and health goals over the desire to realize Daoist philosophy to simply pursuing longevity and happiness, there is a deep layer of going one’s way and trying to follow the changes presented by life.