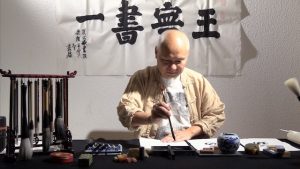 Our new series #PhilosophicalFriday works with calligraphies and notions from East and West to explore parallels and differences between Chinese and „Western“ culture and thought. – And it gives you a little something to chew on for your weekend. A big thanks to Wang Ning for his wonderful calligraphies! 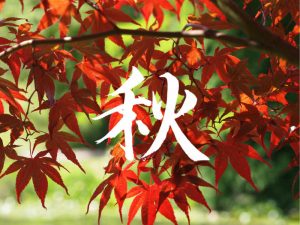 Autumn is the time of harvest. In agricultural societies, it is also the time of feasts to celebrate a successful harvest – which also influenced the American tradition of “Thanksgiving”. It is also the colourful time before winter, which is reflected by many idioms: the German “golden October” as opposed to the “grey November”, but also the “Indian Summer” with its variety of colours – which in German is, much less romantically, titled “summer of old hags” (the old women here symbolise the last gleam of summer before its final decline).

The Chinese character for autumn consists of two components: fruit and fire. The fruit – a tree with an additional accent in the branches – points towards autumn as time of harvest. The component fire points us to the colouring of the leaves, which gradually change colour at the end of summer until they shine in a fiery red in autumn.

What does this parallel tell us? Maybe cultural differences do not emerge until society separates from nature?

In all of these works the swords were shown to require great skill in their use, as well as noble and spiritual qualities,…

Tai Chi principles lead us to moving the point by moving our grip / hand in the opposite direction, leaving the centre of the ‘stick’ relatively still like a lever, with little wrist strength required.

The Chinese character 萬 wan means many. It means a large quantity which is innumerable, because it appears to be uncountable. To […]