Practising with the two-edged sword has a strong effect on the joints. In order for the benefits to be realised, particular attention must be paid to the grip and to the attitude of the elbows and shoulders.

As we do the sword form, and as we fence, we must take care to move the sword as its nature requires. Our wrist must turn and spiral in order for the blade to move through the air correctly as we cut, and the point must move on line as we thrust.

Each move in the form tasks our joints in ways that benefit our kidneys and our urogenital system.

Professor Cheng Man Ching Series
A short biography
Cheng Man Ching Photographs
Cheng Man Ching Yang style Professor Cheng Man Ching (1900 – 1975) learned Tai Chi Chuan in the tradition of the classical Yang style from Yang Chengfu in Shanghai. There he was close friends with Ma Yueliang, the representative figure of the new Wu style. After the death of his teacher Yang Chengfu in 1935, and with the permission of Chen Weiming, a student of Yang Chengfu, and his father Yang Jianhou, Cheng Man Ching developed the so-called “short form”, in which 37 positions are counted, from the the well-known long form with 85 or 108 positions, depending on how they are counted.
Cheng Man Ching on the dao of Taijiquan – a poem Cheng Man Ching is portrayed by his students as an example of total dedication and commitment to the Chinese Arts, especially concerning Taijiquan.
My Father by Katy Cheng
Tai Chi Interview – Katy Cheng
Interview with direct Cheng Man Ching students William CC Chen, Benjamin Lo, Hsu Yee Chung and Hung Ping Chu answered question on Cheng Man Ching Tai Chi.
Cheng Man Ching Forum The year 2000 saw the centenary of the birth of the late Professor Cheng Man Ching who was one of the most renowned exponents of taijiquan in the western world. Cheng originally studied with Yang Cheng Fu, grandson of Yang Luchuan, the founder of the Yang style…
Review 1st European Cheng Man Ching Forum Perigeux, France (PDF)
Cheng Man Ching was also named the “Master of Five Excellences“.
A Grandfather’s Heritage
Self-massage as taught by Prof. Cheng Man Ching
Ken van Sickle on Cheng Man Ching
In this 5-part interview series, Ken van Sickle, photographer, Tai Chi Master and student of Cheng Man Ching in New York, talks about studying with Cheng Man Ching and his desire to capture Cheng Man Ching’s spirit of learning and developing in the movie “The Professor – Tai Chi’s Journey West”. Further points are the sense and non-sense of lineages, the crucial question of “what to get from a master?”, Tai Chi goals and finally the meaning of Tai Chi weapon training, especially concerning the sword as instrument of the Dao…
Cheng Man Ching’s spirit and the concepts of master and lineage holder
Tai Chi goals: What to get from a master and the unique quality of push hands
Beginning’s of Cheng Man Ching Tai Chi in New York: The second generation and the beginning’s in NY
The future of Tai Chi, the styles, Tai Chi sword and the Dao
Cheng Man Ching’s way of teaching
Cheng Man Ching’s way of teaching (1): “I am not a guru.” Cheng Man Ching, student of Yang Chengfu, came to New York in the 60s, at first teaching Taijiquan in the Chinese community, later also teaching Westerners. Being a university professor from a family of scholars and deeply rooted in traditional Chinese culture, he was confronted with flower children searching for a guru.
Cheng Man Ching’s way of teaching (2): The Dantian The discussion about the nature of the Dantian is old and it remains unresolved until today: Is the Dantian a bodily, material reality or an ideal concept of Traditional Chinese Medicine to explain certain psychosomatic correlations? The debate cannot simply be described as a conflict between East and West or between Tradition and Modernity.
Cheng Man Ching’s way of teaching (3): On meditation Our idea of meditation is mainly influenced by two aspects, the visual and the practical aspect. The mind’s uniform picture of a meditating person is someone sitting still in a peaceful environment, in a monastery or on a mountain.
Cheng Man Ching’s way of teaching (4): On being a master Cheng Man Ching’s teaching was marked by underlining sameness and diversity at the expense of hierarchy and difference. This approach formed the basis of his unique way of bridging the cultural gap between East and West.
Tai Chi Sword Book by Ken van Sickle Ken van Sickle’s book contains short, poetic parapgraphs about Tai Chi Sword, the Other, tradition, technique, mastery,… – in short: about life itself! Tai Chi Sword has originally been published as a Taiji Europa project by Ronnie Robinson and Nils Klug in 2014. The author gave us his kind permission to republish it on the web.
The Professor: Tai Chi’s Journey West – A Review The documentary The Professor: Tai Chi’s Journey West by Barry Strugatz/Ken van Sickle can be warmly recommended.
The title of “Master” in the Tai Chi lineage Back in (historic) China, the terms used to formally address one’s Taijiquan teacher in the proper way depended on the actual student-teacher relationship. While the Chinese terms differ widely, in English language the use of “Master” became widely accepted. Being formally addressed as a Master by one’s student has been and still is a question of courtesy and respect for many practitioners and teachers, although some schools in the European Cheng Man Ching tradition have dispensed completely with these formal honorary titles…
Cheng Man Ching’s students on mastery Cheng Man Ching’s direct students – the “second generation” if one sees Cheng Man Ching’s influence as determining a new approach – seem to follow this new tradition while continuing to adapt further to modernity…
Grandmasters, Big Sisters and Elder Brothers As Taijiquan in the Cheng Man Ching tradition has gone beyond the traditional system of Baishi and formal acceptance into the “family” or the monastic community as a Tudi or disciple back in the 1960s, the honorable naming of elder teachers and students follows a mixed system…
Taijiquan Classics Here you can find a translation of the Taijiquan Classics. Dr. Tao Ping Siang translated the Taijiquan Classics into English for his Western students…

Tai Chi principles lead us to moving the point by moving our grip / hand in the opposite direction, leaving the centre of the ‘stick’ relatively still like a lever, with little wrist strength required. 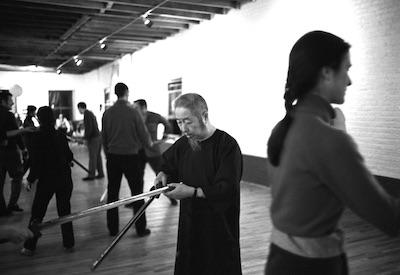 A general way of measuring sword length is with the pommel on the floor, the point reaching near but not higher than your navel. However since the length of the blade is the most important element, and …

To the degree that you plan or anticipate (think) …
… You are not in the present time, and thereby vulnerable.